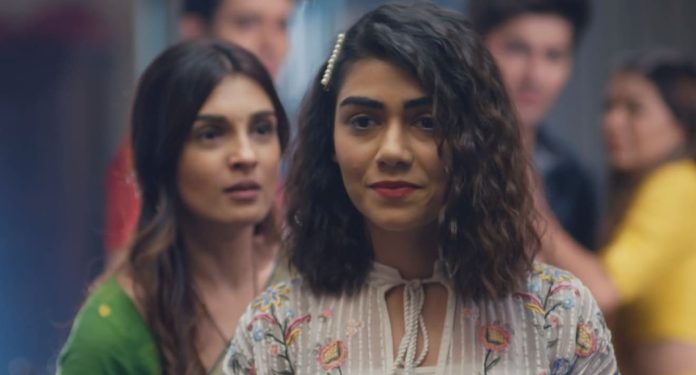 Pandya Store 6th January 2023 Update Shweta fakes suicide Rishita and Dev worry for Chutki, who is suffering from trauma. They learn that her medicine costs 50000 rupees. They worry about arranging the money. An upset Dev returns home. Dhara enquires about Chutki and Rishita. Dev tells her that the doctor has prescribed a costly injection, and he doesn’t know how to arrange the money so soon to get the aid for Chutki. Dhara grows worried. She comes up with an idea to set up an idli dosa stall to earn money for Chutki’s treatment.

Later, Shweta learns that Pandya family is selling the house. She decides to buy the house and take revenge on Pandyas. She wants to bring them on roads. She goes to meet the Pandya family and tells them that she has come to buy their house. Rishita and Raavi accuse Dhara and argue with her. Krish asks them to not fight in front of Shweta. Krish tells them that Shweta is interested in buying the house. Shweta fakes a suicide attempt. She gets hospitalized. Hari meets her and grows concerned for his daughter.

Shweta is playing a new game to target the Pandyas. She fakes her illness to scare her parents and get back into their good books. She tries to convince Hari to buy Pandya house for her. She tells that she wants the Pandya house at any cost. Dhara learns that Hari and Jankana have come to buy the house. She refuses to sell the house. She wants Shweta to buy the house herself and sign the legal papers. She wants to get the Pandya store back from Shweta. Raavi and Rishita worry that Shweta is one step ahead of them. They fear that Dhara will end up losing their house. What will happen next? Keep reading.

Reviewed Rating for Pandya Store 6th January 2023 Update Shweta fakes suicide: 3/5 This rating is solely based on the opinion of the writer. You may post your own take on the show in the comment section.