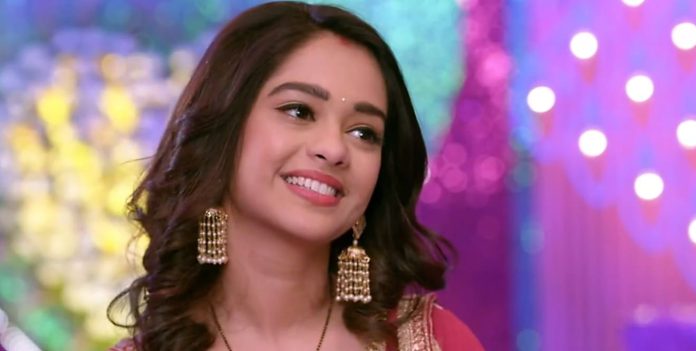 Kumkum Bhagya 16th January 2023 Written Update Leap story Prachi and Ranbir’s story takes a leap. Prachi goes into labor. She is rushed to the hospital. Ranbir and Prachi’s moments are seen. Aaliya escapes from the prison to take her revenge on Prachi. She reaches the hospital with a pledge to kill Prachi. Aaliya will be seen killing Prachi, after killing Pragya and Abhi. Aaliya will shoot down Prachi. Prachi loses her life, while her baby gets rescued. Rhea will be seen as a foster mother for Prachi’s daughter. Rhea and Ranbir become parents to Prachi’s daughter. Prachi leaves from their lives forever. The story will now revolve around Rhea, Ranbir and Ranbir-Prachi’s daughter.

Earlier in the show, She adds that Ranbir will read the special letter to Prachi, who had no idea about it. Ranbir turns shy. Everyone asks him not to feel shy. They encourage him to romance his wife. Pallavi tells that babies get happy when their parents romance. Ranbir asks them not to judge him because its his first love letter. He reads the cute love letter in front of everyone. Ranbir and Prachi have a moment when he goes on his knees and proposes her for marriage. Pallavi and everyone get happy. Ranbir confesses his love to Prachi. They both have a moment of joy. Pallavi blesses them. They both romantically perform. Prachi feels pain in her tummy. She tells Ranbir that its time, their baby is coming.

He panics hearing Prachi’s screams. He tries to get lift from someone. He comes across Rhea. He tells Rhea that Prachi is in her labour, they have to rush her to the hospital. Rhea assists Ranbir. They both take Prachi to the hospital. Prachi asks Rhea why didn’t she come to the party. Rhea tells that she had to go to the police station to meet Aaliya. She adds that Aaliya wanted to meet her for the last time because she is getting shifted to the jail. Aaliya attacks the police staff and escapes from the police van. She threatens the inspector and asks him to go away.

Aaliya tells the constable that she will not spare anyone. She shoots the constable on her leg and teaches her a lesson. She tells that she has made few promises to herself. She heads to Ranbir and Prachi to ruin their lives. Ranbir, Rhea and Prachi reach the hospital. Ranbir asks Prachi not to worry. Prachi holds Rhea’s hands. Ranbir asks doctor to give painkillers to Prachi. He wants to be with Prachi. She asks him to stop arguing and stay outside. He shouts that he loves her a lot. He tells the doctor that Prachi is his love, she should be fine. He asks doctor to make the delivery painless.

He asks why is Prachi scolding him. Doctor tells that its normal, wives stay angry on husbands at the time of labour. He asks the reason. Rhea asks Ranbir to relax. She congratulates him that he is becoming a father. Ranbir asks her to congratulate him after the baby comes. She tells that she is sorry, she has to go for Aaliya, she has to meet Aaliya for the last time. She isn’t taking her side, but wants to repay her favors. She remembers Aaliya and her blood ties. Ranbir tells that he knows it well.

She can’t see Kohli family getting happy. She wants to turn their happiness into sorrow. Ranbir’s family arrives at the hospital. Ranbir tells that Prachi is in pain. The family asks him to relax, the baby will soon come and they will forget all their tensions. Prachi delivers the baby. Ranbir and his family rejoice on knowing that it’s a baby girl. They happily dance. Ranbir tells that he has become father for the first time, he can’t control his excitement. Doctor asks Ranbir to go and meet Prachi and the baby. Ranbir happily hugs the doctor. Dida tells that they will happily celebrate the newborn’s arrival.

Later, Ranbir meets Prachi. They both get emotional while stepping into their golden phase of life, parenthood. Ranbir takes the baby in his arms and sheds tears of joy. Ranbir and Prachi name the baby Panchi. He tells that he always wanted a daughter, who is Prachi’s reflection. He can’t express his feelings. She tells that she is experiencing an unique emotion. They both welcome their baby in the world. They love Panchi a lot. Doctor asks Ranbir if he has met his world, his life. Ranbir tells that he has got two lives now, Prachi and Panchi. Prachi tells that she wants to keep the baby with her.

Doctor asks Ranbir to put the baby in the cradle until the checkup completes. Prachi wants to hold the baby in arms. After he goes, Prachi tells the doctor that she is getting much happiness seeing Ranbir’s sheer happiness. She calls Panchi the reason for their happiness. She thanks Panchi for coming in their lives. Aryan and Sahana take the cake delivery. They go to the staff quarter to get the knife for the cake cutting. Aaliya reaches the hospital. She attacks the staff member. She apologizes that she had no option. She takes the nurse’s disguise.

Aryan and Sahana come there and find the nurse lying unconscious on the ground. They enquire about the nurse. Aaliya cooks up a story to fool them. Aryan tells that they want a knife for the cake cutting. He adds that Prachi delivered a baby girl, and they are really happy. Sahana tells that Prachi is her sister. Aryan and Sahana tell her about the baby girl. Aaliya gives them the knife. Sahana asks her to come and have the cake. Aryan asks Aaliya to show her face so that they can recognize her later. She lies that she has severe infection and can’t remove the mask. She sends them away. She shows her hatred for Prachi.

Reviewed Rating for Kumkum Bhagya 16th January 2023 Written Update Leap story: 3/5 This rating is solely based on the opinion of the writer. You may post your own take on the show in the comment section.