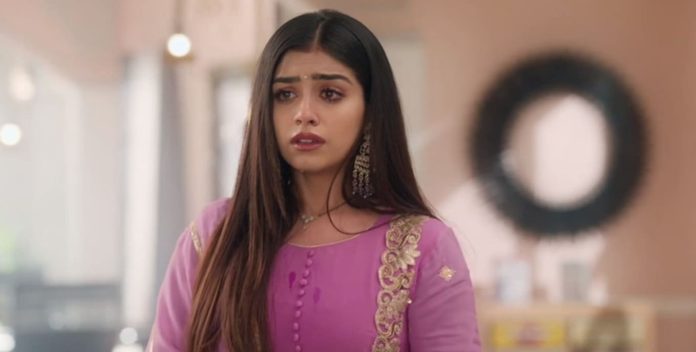 Udaariyaan 16th January 2023 Written Update Nehmat catches Advait Harleen desperately loves Ekam. She wants Ekam to reciprocate her love. She delays Jasmin’s arrival by disappearing her passport. She wishes Ekam forgets his past and moves on in life. Ekam is still stuck in his past. He wants to inform Nehmat about Advait’s cheat. Ekam reaches Nehmat’s house to meet her. She gets into an awkward situation when Neeru Bua catches Ekam and her together. Neeru Bua creates a scene and asks them if her arrival has hindered their romance. She asks them if they wanted to hug and kiss. Ekam and Nehmat get defamed by her. Neeru tells that she knows their love story, just like the entire Moga is aware of it.

Ekam just wants to talk to Nehmat and tell her about her husband’s cheat. Nehmat turns deaf ear to him. She asks Ekam not to create any drama in her household. She commands him to leave. Her bitter words break his heart. He gets tearful eyes and leaves from her house. Nehmat isn’t happy, but she is trying to be faithful in her marriage. She doesn’t want to have any terms with Ekam now. Ekam feels hurt by her behavior. He reminisces their moments when he felt they are inseparable. Nehmat accepts their separation and wants to move on in life with Advait. Ekam tries to bring Advait’s truth out. He re-attempts to meet Nehmat.

Nehmat goes to wake up Advait. She is stunned on seeing him in bed with his lover. Nehmat can’t take his strike on her self-esteem. She catches Advait’s cheat. She decides to walk out of the Kapoor mansion and also Advait’s life, when she learns that Advait isn’t willing to keep their marriage. Nehmat packs her bags and begins to leave the house. Ekam finds Nehmat leaving. He learns about Advait and his lover’s presence in the house. He realizes that Nehmat has learnt the truth, and decides to stand by her. Shamsher wants to stop Nehmat back for the sake of Advait’s political image. What will happen now? Keep reading.

Shamsher informs the family about the huge Lohri celebrations. He tells that he will celebrate with his sons and bahus. He wants his bahus to look amazing. He asks Advait and Nikhil to get the best dresses and jewellery for their wives. He wants the people to keep talking about his family. Advait tells them that he is busy, he can’t take Nehmat for shopping. He asks his mom to take Nehmat. Satvik tries to bring Ekam and Harleen together.

Nehmat asks Advait to come for shopping, they shall coordinate their clothes and look good together at least for Shamsher’s sake. He isn’t interested in pleasing Shamsher. He asks her to buy anything she wants. Ekam gets mad while handling the mischievous kids. He asks them to study instead troubling each other. The kids begin to cry. Harleen reaches there to play with the kids. She manages them well. She surprises Ekam by her skills. She hopes that he spends time with her. He thanks her for handling the kids. She tells that she is good at it. She asks him to speak to her well.

She convinces him to become her friend. She gets happy that she has won in her goal. Ekam makes a leave. Advait apologizes to his girlfriend. She is upset that he didn’t celebrate her birthday. He asks her to come home, because he has sent the entire family for shopping. Ekam reaches Advait’s house and learns that the family has gone for shopping. Satvik calls Ekam to fix a dinner meeting. Ekam makes an apology as he can’t come for dinner. He misses to see the lady entering the house. Ekam tells that he is busy tonight. Satvik tells that he is leaving in a few days.

Ekam agrees to meet him. Harleen tells Satvik that she will arrive at the same place and act ignorant of their dinner plans. Advait surprises his girlfriend. He thanks his girlfriend for forgiving him and doing his favor. Nehmat returns home. Ekam thinks it’s the right chance to tell Nehmat about Advait’s truth. Nehmat rushes to get the shopping list. Ekam asks her to listen to him once. She asks him to not come in her way again and again.

She hurts his feelings and rushes to her room. She is stunned to see Advait and his lover romancing. Advait asks her if she didn’t go with the family. Nehmat tells that she had gone out, but came back to take a list. Advait asks her what’s wrong. She confronts him about his illegitimate affair. She reminds that he is married to her. She rebukes him. She tells that he worries for his political imagine, his evil deeds will ruin his career totally. He asks her why is she getting so hyper when there is no relation between them. He asks if she is feeling bad. He asks if she expects him to be loyal to her.

She tells that she doesn’t expect his loyalty. She was hoping that he will reform. She lectures him. He asks her not to behave like a typical wife. He reminds that they have no relation. She asks him to respect her. He tells that even she doesn’t respect him because Ekam is still in his heart. She tells that she didn’t let Ekam come between their relation. She blames him for hiring Ekam and bringing him home. She doesn’t want to tolerate his affair. He taunts her for not being true to her husband. He tells that he loves his girlfriend, he isn’t scared of anyone.

He leaves with his lover. He sees Ekam outside the house and tells that Ekam might have reported this to Nehmat. Ekam is not surprised. Advait tells that Nehmat would not get free of the marriage, until she dies. Nehmat remembers Rupy’s words of support. She decides to leave the house to keep her esteem. Nehmat packs her bags. The family returns home and finds Nehmat leaving the house. Advait also comes back. Shamsher asks Nehmat what is she up to. Ekam tells that he will answer them and clear their doubts.

Reviewed Rating for Udaariyaan 16th January 2023 Written Update Nehmat catches Advait: 3/5 This rating is solely based on the opinion of the writer. You may post your own take on the show in the comment section.