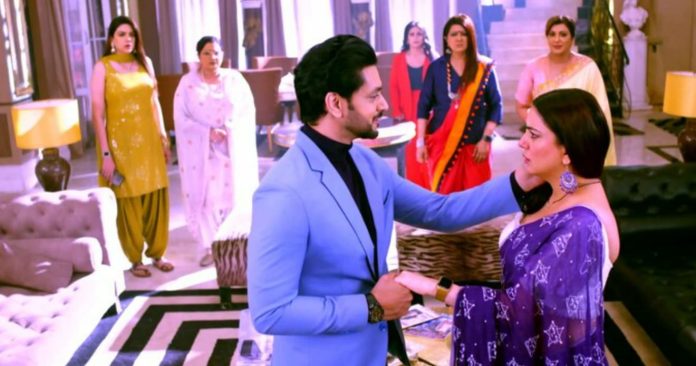 Kundali Bhagya 27th January 2023 Written Update Preeran unite Arjun is warned by Anjali not to forget that Rishabh and Preeta nearly killed him. She tells him that their goal was to uncover the rationale behind Rishabh and Preeta’s plot. She coerces him into thinking Preeta is guilty. Soon after, Arjun asks Preeta to marry him in return for allowing the Luthra family stay in their home. Rakhi is glad that Preeta accepted his offer. Everyone in the family is stunned to hear this, though. Anjali queries his choice when he exits. She is given a revelation by Arjun, who then goes on to explain why he chose to wed Preeta. Rakhi stands up for Preeta in the face of everyone’s attempts to persuade her that she is making mistakes.

Later, Karan tells Shrishti that his motives and intentions will be known by all. Karan tells that she will understand everything soon. She tells that Preeta is doing this for the family’s sake, she would have never agreed to marry him, she is Rishabh’s wife and respects him a lot. He asks her to call him Jiju. She tells that she used to call Karan as her Jiju.

She asks him not to dream much, the marriage didn’t happen yet. He tells that the marriage date is fixed, its after two days. She asks him did he bribe the pandit to get him married soon. He tells that he knows about the auspicious mahurat for the marriage. He asks her not to worry, everything will be okay. He advises her to calm her anger. Prithvi tells Anjali that he can get Arjun for her. Anjali asks the security to throw out Prithvi. He asks her to think well, he can get Arjun for her. Anjali is clueless if she should believe Prithvi or not. What will Anjali and Prithvi do to stop Preeta and Karan’s union? Keep reading.

Karan and Preeta share an eyelock. He tells that he wants to know something, and wants her to answer just the truth. She tells that she has the same condition for him, she will ask him something and she just expects the truth. He agrees to him. He asks her why did she say yes to his marriage proposal. She tells that she felt this is right for Rakhi and the family members. He asks about herself, if she felt its right for her as well. She tells that its his second question, when they decided to just ask one question each. He tells that they can ask two questions each. She agrees. She asks him the reason for the marriage. He tells her that he can’t think of anyone else, he just wants her.

Karan asks Preeta if she would marry him, if he frees her from the marriage condition and also lets the family stay in the house. She answers with a yes. She tells that she likes to stay with him, she longs to spend time with him, she wants to talk to him and enjoy life. She tells him that she wants to live her life with him, she has always thought of him every moment, she misses him a lot when he isn’t in front of her, she isn’t able to say anything when he is away, she feels he is her life, happiness and love, he is her everything. Her reply makes him emotional.

She remembers Rakhi’s words. She asks Arjun if he wanted to hear this. She tells the real reason, she wants to marry him to get an official license to trouble him, because he has troubled them a lot. She asks him to change his decision if he wants. Karan tells that he won’t change his decision, if she troubles him, then he will double trouble her. She sheds tears, realizing he is her Karan. Karan also weeps. Anjali comes to meet Prithvi. He asks her why did she come, when she had ousted him from her house. He asks Sherlyn to throw out Anjali. Anjali asks for his help. He refuses to help her.

She apologizes to him. He asks her to get out. Sherlyn asks him not to behave rudely, Anjali is their friend, because their enemy is the same. Prithvi tells Sherlyn that he offered help to Anjali, but the latter threw him out of the house. Anjali admits her mistake and apologizes. Sherlyn is ready to help Anjali. She tells that she will get Arjun for Anjali, she won’t let Preeta win. Karan gives his kundali. Preeta realizes that it’s a fake kundali. Rakhi fears that kundalis may not match. Bani gets angry on Arjun, who does whatever he wants, without caring for anyone’s sentiments.

Dadi asks them to talk in a positive way, and enjoy the marriage moments. Karan realizes that Rakhi knows the truth, that he is her son Karan, so she is so happy. He doesn’t want to accept this truth. Pandit tells that the kundalis are matching well, but there is a little problem in the marriage’s mahurat. Shrishti and Kritika tell that they are okay with a late mahurat also. Dadi asks them if they aren’t interested in Arjun’s marriage. Rakhi tells that Arjun is perfect. Shrishti asks Rakhi to look at Arjun closely, he is heartless. Kritika tells that Arjun acts like family always.

Rishabh asks her to stop. Sameer tells that Arjun has made them mad. Mahesh asks the pandit not to pass time, and just tell them the mahurat. Pandit tells about the close date. Kareena tells that the marriage can’t happen. Rishabh stops her. She tells that they have to maintain their class, they can’t manage the marriage arrangements in a few days. Rakhi tells that she will handle everything in one day. She asks them to prepare for marriage. Karan stops Rishabh and informs him that he is shifting to guest room as of now, but he will shift to Rishabh’s room after the marriage. He hopes Rishabh doesn’t mind.

Rishabh tells that the entire house is of Arjun now. Karan goes outside to drop Dadi. Rakhi asks the family not to take tension of Karan, he is just acting as a bad boy, he is making his bad boy image. Preeta recalls Karan’s words. Prithvi tells that Sherlyn can’t make any plan without him. She tells Anjali that they can win even without Prithvi’s help. Anjali gets Arjun’s call. She asks them not to talk for some time. Karan gives the good news to Anjali that his marriage date is fixed. She grows worried.

Reviewed Rating for Kundali Bhagya 27th January 2023 Written Update Preeran unite: 4/5 This rating is solely based on the opinion of the writer. You may post your own take on the show in the comment section.