The sneak peek starts with Tiger Shroff dancing on a Heropanti movie song and is then welcomed by Kapil, Siddhu, and the audience with a standing ovation for his dance performance.

Kapil then comes to him on stage and speaks on the moustache which a real tiger has, and also talks on his father moustache and then asks him Why he didn’t get a moustache until now ? Tiger replies that he is still in his younger days so moustache will come later. Kapil then says that Tiger has done a movie even before getting a moustache which is great. 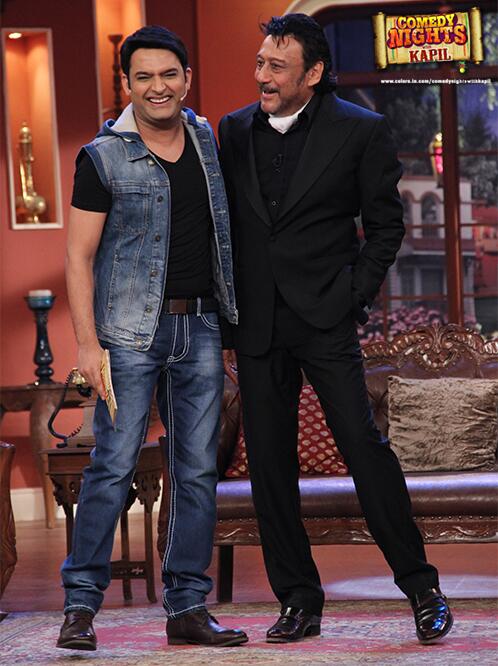 Kapil then welcomes Jackie Shroff who comes on the Hero movie title song with again standing ovation from Siddhu. Tiger then does a sommersault on stage with which Kapil and Siddhu becomes surprised.

Kapil shows photos of characters from Jackie’s movies which he refer it to as co-actors. The first one shown is the dog Moti from Jackie’s movie Hero. In the photo, Jackie is touching Moti with great love and affection which is a scene from the movie Hero (1983). Kapil speaks on the love shown by Moti in the movie. He then asks Jackie about his love for animals or whether he has fear of animals. Jackie responds and speaks on that shot with Moti and says that he should get an oscar for it. The reason being that as dogs become big he is afraid of them. During the shot he was afraid of the dog. Kapil cites an experience of Jackie during his visit to the music composer house – Laxmikant. Jackie responds about the incident that happened in Laxmikant ji’s house where unknowingly he was bitten by his dog when he went to eat at the dinner table. The dog was sleeping beneath the table and jackie put his foot on the dog and thereby getting a bite on his thigh and not much upper part of his body invoking a laughter. 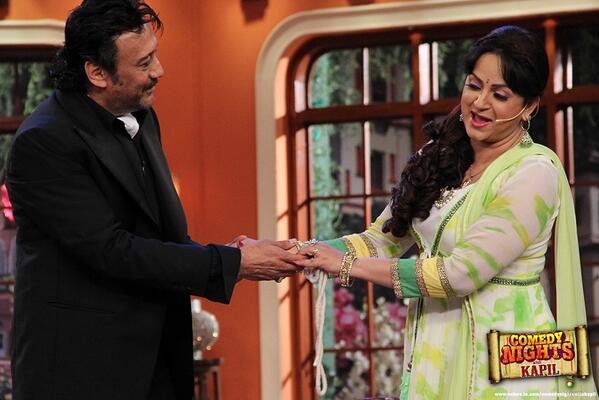 Kapil then welcomes Heropanti’s actress – Kriti Sannon who comes on the stage and hugs Kapil. A man from audience speaks that he never did a stunt and wants Tiger to teach him about how to do stunt. The man comes on the stage and Tiger first enacts a spinning shot where his foot goes over the man’s head. After this, the man also repeats the same shot with Tiger and then leaves. 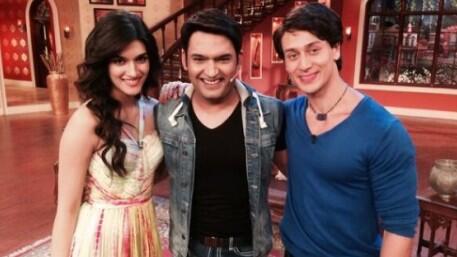 Sooner, Palak comes on the the stage on a small scooty (Luna) on the Ding Dong Oh baby sing song. Pyaar ke Shaam ka.. She greets Jackie. Daadi is also seen on stage. When Bittu taunts Palak on her Luna, She then says that she filled the petrol in Luna by her mouth 2 times. Palak says that she can ignite fire from her mouth as some petrol still remains in her mouth which is a warning to Kapil as he was taunting her. Palak then wants to speaks a quote – Mein Jab Bi Is Ghar mein Aati hoon, Bittu sharma Kha jaate hain mera Bheja…and then sings Goriye Goriye mera dil chura ke leja. and even dances on the song. Jackie sir is amused with her performance. But Bittu is unimpressed and tells her to take Babaji ka Thullu from inside and with this Daadi becomes excited as well.