PS: FYI folks: Though Colors promised that Karan Tacker will come on the show for today’s episode but Karan didn’t appear on the show, probably he will come for tomorrow’s episode.

The show starts with Kapil playing the drums and Dadi, Palak, Bua and Raju dancing on stage and dressed in pink and colorful costumes with lots of make-up on a Balam Pickari tune from Yeh Jawaani Hai Deewani movie. Daadi who is dressed in all pink even wears a blonde hair gown goes to Bittu and forces him to come with her and enjoy with them. Bittu informs Daadi that they will celebrate International Imarti Devi Granny Music Awards. Raju becomes puzzled on hearing it. Bittu informs them that he has taken 21,000 INR from a girl who wants him to run an International music awards in the memory of her grandmother (Granny). Bittu suggests them to go inside and prepare for the singing by looking in the Internet how international singers compete in competitions.

Kapil speaks with Siddhu on the numerous awards function these days. He says that nowadays actors and stars when they receive a phone call from an award function organizer, they do not entertain them. Kapil speaks on different looks of trophies. He says athlete trophies looks very vibrant and shows confidence while acting trophies are very sober and down-to earth. Kapil then talks on the trophies with respect to different climates. He says that winter trophies looks like the one who sits as they are about to shiver.

Bittu himself becomes the host of 29th Imarti Devi Music Awards with Sugandha as his co-hostess. He then introduces the participant by cracking a joke that the participant will leave fast after singing and welcomes him as Tochi Raina. Tochi comes on the stage while singing Itkara song (from Wake-up Sid movie) – “Rooh Ka Banjara Re Parinda.. Chad Gaya Dil ka Re Gharonda… Chad Gaya Dil ka Re Gharonda Todke.. Re Gharonda Todke, Gaya Chodke Je Naina Karu Band Band.. Beh Jaaye Boond Boond.. Je Naina Karu Band Band”. Kapil and everyone appreciates his singing and claps. Bittu then introduces the next category which is – Best Song of the Year and welcomes Baby Boll team – Kanika, Meet Bros Anjjan. Kanika and Meet Bros comes on the song by singing Baby Doll song from Ragini MMS 2. They together groove on the song. Daadi comes as Tedhi Gaga (spoofing International singer and Icon Lady Gaga) bringing much surprise to Bittu’s co-host Sugandha but Bittu manages to convince her about Daadi’s abilities.

Bua will be going to flirt with heart-throb Karan Tacker with her cute 22-year old funny liners. Karan being a nice guy will try to reciprocate in the same vein as Bua to make her happy and even graciously exchanging Red Roses. 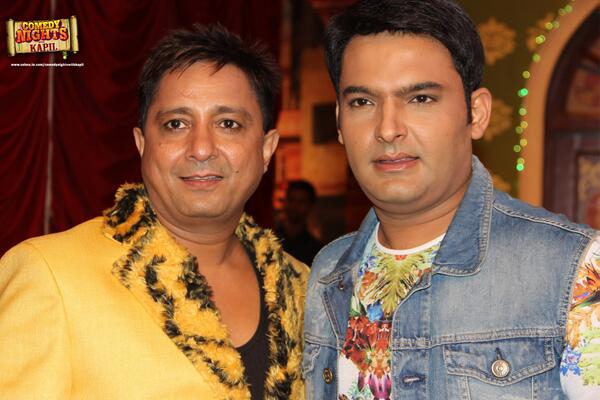 Kapil then welcomes Sukhwinder singh by calling him a Shaar Singer (Singer with a Tiger tag). Sukhwinder ji comes on the stage and dances with Kapil on the song – Aaja Makti phodo Koi Goodluck ..Chal Chal Hongi Tain Tain song. Kapil thanks Sukhwinder for coming on his show and asks for his strong voice. Sukhwinder ji informs that when he was a child he went to a political party and sang there and people showered him with flowers and later he realized that actually the flowers were meant for the minister and he was dragged from that place. That was the first gift of his rise.

Kapil asks that Sur (musical note, intonation) are only 7 but now we have so many millions of songs. Sukhwinder ji says that there are hundred colors which brings such diversity. Sukhwinder ji sings the title song from Matru Bijlee ka Mandola which has different tones and music forms from classical to modern. Kapil’s musicians plays the music with much flair and expertise and Sukhwinder singh finishes the song with a Sargam at the end. In another short promo, Palak and Dhamaka tries to entertain Sukhwinder ji and Palak wants to teach a dance move to him. She says its ‘Tango’ and she needs to utilize her Tan-gho (referring to her legs) invoking a laughter. She then dances with Dhamaka (Akshat) while singing Deh Chak Chak bringing smile on Sukwinder ji and on everyone’s face. 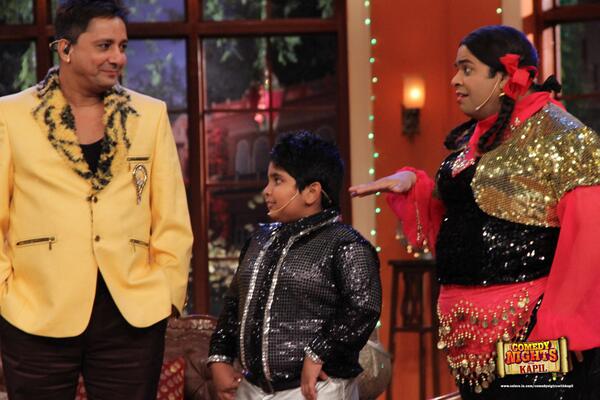 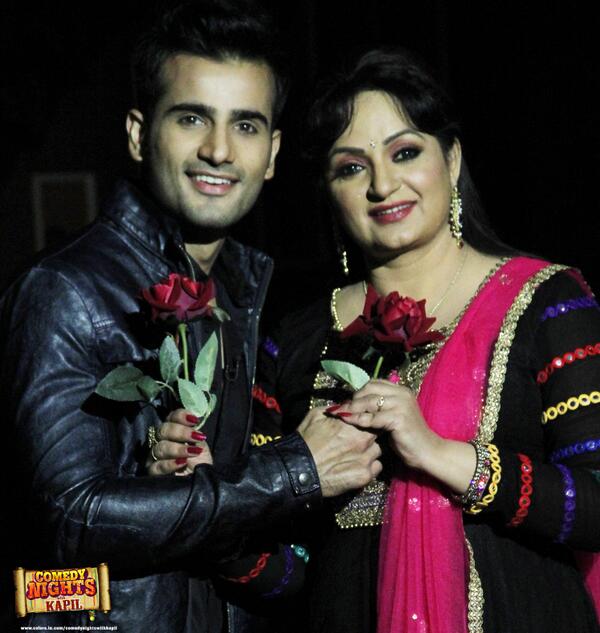 * Kanika Kapoor, an Indian Punjabi Sufi folk singer from the United Kingdom and was born in Lucknow, India. Her forte in music genres are Sufi and Bhangra. While, Meet Bros Anjjan is a trio of Indian Music director which includes Harmeet Singh, Manmeet Singh and Anjjan Bhatacharya. Their recent song composition ‘Baby Doll’ for Ragini MMS 2 was an instant hit among youth. They also did music composition for movies like Satyagraha (Janta Rocks song) and Paan Singh Tomar (Kero Mama).

* Sukhwinder Singh, Karan Tacker, Palak (Kiku Sharda) and Dhamaka (Akshat Singh) are participants in the upcoming dance show Jhalak Dikhhla Jaa 7 on Colors. Karan Tacker is also the host of Bindass show Halla Bol. Read more on Jhalak at our post about it.

* Tochi Raina was born on 2nd September, 1965 in Darbhanga, Bihar. He is an Indian playback singer known for singing in Hindi films. Tochi’s forte with genres are Sufi, Hindustani, classical music. Most notable works includes:
– Itkara – male version song – Wake-up Sid
– Saibo song – Shor in the city movie (duet with Shreya Ghoshal)
– Aali Re – No One Killed Jessica
– Read more about him on his Wikipedia page

* Neeti Mohan is a playback singer and some of her songs are Ishq Wala love (Student of the Year movie) and Jiya Re. (Jab Tak Hain Jaan). She is the sister of Shakti Mohan and Mukti Mohan.

* Incidentally, Imarti Devi was the name of a pivotal character of a women who was a mother-in law in Colors past show Kairi – Rishta Khatta Meetha (ended in December 2012) where she was very severe and sometimes reasonable with her daughter-in law Ambika (Ambi).