Theme of the Episode : Fight Against Sexual Harassment; Fight for your self-respect; Do not let anyone play with your emotions and believe.

Rocky is moved away by Veera as he was forcing her for a kiss. Simmi on camera with heroes team speaks that she will make sure Rocky’s ego is hurt since he will not be hurt emotionally as he thinks so much of himself. Simmi at the party place looks for Veera and sooner calls Veera. Rocky is not moved and puts his force on Veera and wants her to pretend that she is kissing him and takes a photo with her. Veera starts to cry after his actions. He speaks on his satisfaction to get the kiss and asks why she was so serious for just a kiss.

They moved from that place and comes to the party place. He suggests Veera to not create a scene inside, and soon meets Simmi. She asks him what he did with Veera ? He replies on her behavior and reminds that she is kissing boys. Simmi becomes angry with him and goes to meet Veera who has locked herself inside the restroom, and sooner both meets. Veera speaks on Rocky’s forced attempts and harassment. She wants Simmi to take such action, and Simmi promises to teach the boys a hard lesson. Harish and Rocky speaks about their respective kisses, and Rocky informs that he has kissed Veera. Sooner, Rocky and Harish are being wooed to take more drinks, and after then both becomes high and not in full senses. Rocky and Harish are taken to the room by the same boys and girls and their clothes are removed leaving behind only their shorts. Next morning, Harish and Rocky wakes up to find their clothes missing and only in shorts. Rocky finds that not only clothes are missing but also his wallet, car’s and home key’s are missing as well. They also find the room to be locked and becomes worried. Sooner, Rocky receives a message and it is then shown how Harish and Rocky were left with only their shorts [flashback scene: Veera explained to other people there about Rocky’s ill treatment and abuse who then mixed sleeping pills in rocky and harish’s drink, and then took them to the room, removed their clothes and locked them inside].

Rocky and Harish sees Simmi, Veera and other friends outside their home, and Simmi calls Rocky and reiterates him to read her earlier message which asked them to find out who is the winner for their bet and once they declare one winner then only they can come outside. Simmi speaks that according to her harish is the winner but for Veera it looks that rocky is the winner. Rocky wants Simmi to end their pathetic situation and wants her to open the door. She insists him to put the phone on speaker. He speaks in a bold voice and speaks about his position and boasts about his ability. She responds on knowing all about him yesterday and orders him to keep the phone on speaker. She then wants him to take the lipstick from there and write on his chest with it that he is a loser. Rocky fumes at her and thinks what she is saying is rubbish but she is not listening to him and disconnects the call. Harish wants Rocky to write it down, and Rocky in turn wants Harish to do it instead. Sooner, both engage in a fight (Tu Tu Main Main) and blames each other for the bet.

Harish speaks that Rocky has told earlier that he can kiss any girl, and Rocky responds that Harish has told him that he can easily win Simmi as he knows since his childhood. Harish then opens up and thinks he cannot do such a thing (lipstick writing on chest) as he fears about his parents knowing it, and Rocky has the same fear. Harish thinks that it was Rocky’s idea and he then tries to beg Veera and asks for forgiveness. Rocky takes Veera’s call and apologies to her, she asks him how he has harassed her inside his car even after her repeated pleas to stop. Veera doesn’t listen to him and soon Rocky receives the call from his father and he speaks of coming to his home in 5 minutes. Rocky is very nervous and with much worry on his face writes down I M LOSER on his body and sends the photo. He receives the message that now Harish has to do the same. Harish with a teary face also writes the same of being a loser. Both feels ashamed and he also clicks a photo and sends it to them.

Simmi and Veera learns that Rocky and Harish have written down with lipsticks. Simmi calls Rocky and speaks that punishment is done, and now comes the confession. Rocky wants her to stop it, but she wants him to write a detailed confession of last night harassment and post it online. Simmi and Veera finds the same and laughs on them for posting the confession. Sooner, the room lock opens and they come out of the farmhouse to find Rocky’s car without tyres and at the same time receives a call from his father. Rocky becomes worried and calls Simmi and informs her that there is nothing in the car and she lied. She responds that even he lied on being committed for her and cuts his call. Rocky informs Harish that they have to go in that some condition. Both are frustrated and feels helpless at that time. 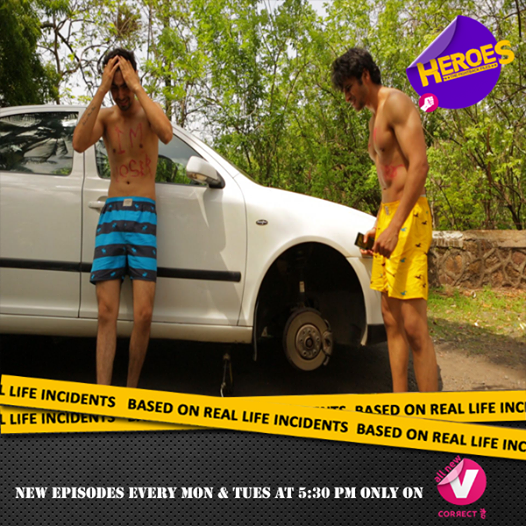 Simmi and Veera on camera with heroes team speak that they don’t have any clue what they did afterwards and also they were not seen in social circles, coffee shops, gyms. Veera speaks that they are not meeting friends, and even heard that Harish is moving out to other city and taking admission. Simmi speaks that she learnt that Rocky’s outside movement is restricted and now he can only go outside in elder’s company. Siddharth Malhotra regards both Simmi and Veera as true hero, and Shraddha suggests that we should find out villain in our life and then have a fightback without fear to be a true hero.