Actors/Stars Shraddha Kapoor and Siddharth Malhotra are the guest hosts on Heroes. Shraddha speaks that every story has hero and villain and speaks that in films hero fights with villain easily and wins, but in real life its not easy to fight with villains. Siddharth then speaks on today’s story of Heroes where we will see two real-life Heroes and take inspiration.

Theme of the Episode : Fight Against Sexual Harassment; Fight for your self-respect; Do not let anyone play with your emotions and believe.

The story starts with Harish and Rocky meeting each other and Rocky comes with a bike (looks like Royal Enfield) with which Harish feels much awe and thinks that Rocky’s father is too gracious in giving luxuries to Rocky. Rocky speaks that his father doesn’t agree when he speaks of party at the farmhouse. Harish becomes worried and thinks that the party which Rocky was organizing is cancelled. Rocky responds that he doesn’t listen to his father and the party is ON and they will have a blast, and moreover wants Harish to come with his girlfriend Veera. Harish agrees to bring Veera, and Rocky advises him to spend some good times with girls and then dump them. Harish continues to be in awe of Rocky’s bike.

The party night comes and Veera and Simmi are seen going in their car for the party. Veera is well prepared with makeup to meet her boyfriend Harish and Simmi thinks that her boyfriend Rocky is much better than Harish. When Veera speaks of Rocky’s background, Simmi accepts the fact that she has heard that Rocky is tagged as Casanova but still believes that he has changed since he has spoken to her that he is officially committed.

On other end, Rocky and Harish are seen in their car and going to the party. Rocky speaks to Harish that in order to win girls, you need to say some serious things and give some jazz like repeatedly saying to her I love you, I cannot live without you, you are the only one. Harish thinks that feelings of girls will be hurt by speaking lies. Rocky smiles and asks him whether he has fallen a lot for Veera ? Harish responds that Veera is good and cute. Rocky then suggests that all girls are cute, and asks him Isn’t Simmi cute ? Harish asks how come Simmi came in their discussion. Rocky again asks Harish how he feels for Simmi as they know since long time ? Harish informs him that Simmi is not his type, and Rocky speaks there are two types of girls – hot or not hot. He thinks that Simmi is too hot for Harish and she might have rejected him as well. Harish responds that he haven’t tried so how can she reject him. On that note, Harish speaks that if he has tried he would have win Simmi. Rocky is not convinced with his answer and thinks that he is made for girls like Veera. Moreover, he speaks that he can get any girls and shows his exuberance while saying so.

At the end of Veera and Simmi, Simmi reiterates that Rocky has changed. Harish speaks to Rocky that he cannot win Veera since she is faithful but can win other girls. Rocky responds that Harish has faith in his mind while he feels attraction is in his body. Harish speaks that you get attracted by your heart but Rocky still continues to taunt Harish and says that he got Veera because he couldn’t get Simmi and wants him to accept that reality. Rocky then goes on say that he can win Veera anytime, after hearing this Harish asks him to not say anything which he wants. Rocky proposes a bet and says that he will kiss Veera at the party, and asks Harish to kiss Simmi though he thinks that harish will not even touch her. Harish accepts the bet and asks him what will he give to him if he wins, Rocky responds on giving his bike while Harish offers his Ipad.

Veera on camera with Heroes team speaks that she never thought that Harish has made some plans and cannot believe about those things. Harish and Rocky meets Veera and Simmi at the party place, and Rocky even compliments Veera on her beauty. At the party, Rocky dances with Simmi but looks at Veera. They exchanged partners and Rocky dances with Veera while Simmi dances with Harish. Sooner, Harish is taken away by some friend and he goes out away. Veera also goes out to find Harish but is hit at her legs and Rocky takes the opportunity and takes Veera with him in his car. Harish goes inside the party’s room and comforts Simmi who is completely drunk. She asks him about Veera and Rocky and he answers that they are coming. Harish touches Simmi and gives her some massage. 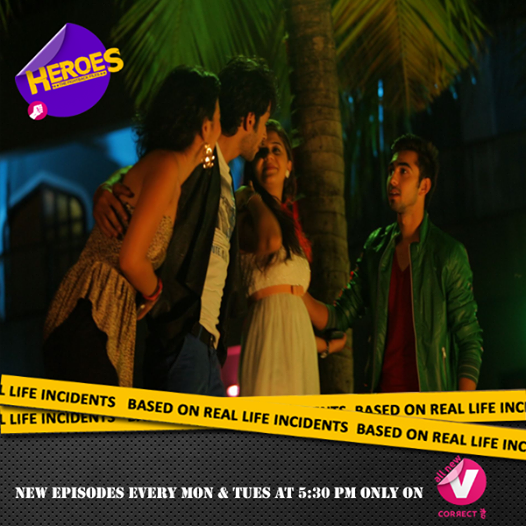 Rocky takes Veera and stops the car at some nowhere place and soon she finds from there the city seen with lights. He insists Veera to drink alcohol and touches her body but she shrugs off. He speaks that beauty is not in the place but in the company you are with. Harish at his end requests Simmi for a kiss. Rocky continues to flirt with her and calls her cute. Simmi slaps Harish as he insisted much and calls him mad and the one with disgusting arguments. He then speaks that he will loose his IPad if she didn’t cooperate. Veera starts feeling uncomfortable, and Rocky speaks that she is looking much hotter with worry in her face, Harish opens up about the bet which he and Rocky has made.

Simmi is in tears, and Harish says that it was Rocky’s idea to make the bet. Simmi after realizing about their plan wants Harish to just pretend that he is kissing her and orders him to take the photo and send it to Rocky. Harish sends the photo to Rocky, and she leaves from there. He thinks that Veera will not kiss Rocky and he will take his bike. Rocky then shows Harish’s photo with Simmi, and Veera thinks it is not true. Rocky comes close to kiss her and she is battling out to move him away from her.

To be continued in next Episode -> Heroes 1st July Episode