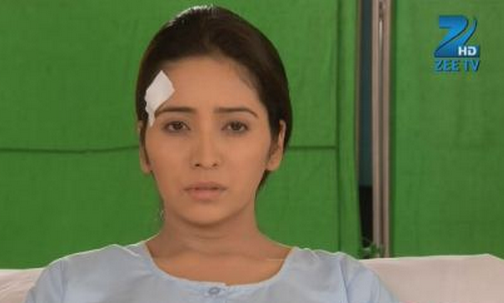 A REVIEW ON SHODDIER DEVELOPMENTS OF EMA

Poor Kamla can’t help herself now, as her sweet daughter Kalpi, for whom she started showing concern lately, has gone out of the Kamla Nest to take a new flight. Better name the show as Ek Mutthi Ghonsla!! Kalpi does not need to work honestly to earn a living now, as she has landed in a rich family post her accident. We knew about Raghav and Kalpi’s accident, but Kalpi drowned in the river down the cliff, and got saved by some men, who rushed her to the hospital. Suhana, who was also an accident victim died at the same hospital, and scared of giving this news to her dad Sanjay Diwaan, her uncle Dheeraj used his contacts in the hospital to influence the doctors and exchanged Suhana’s dead body to give it Kalpi’s identity, and made Kalpi don the life of Suhana Diwaan, as Kalpi got her face completely burnt and lost her memory too, so that she can swiftly get into a new home. Kamla will be shown Suhana’s dead body as Kalpi, and she might be hitting the walls of the hospital with her metal hands, to mourn for Kalpi’s death. The hospital should beware of Kamla and quickly wear the slippers to run away from her, before she takes it down by her tears flood. What a stupid twist!! Can’t believe the creativity of the makers…..

Do they want to show Kalpi’s got a heavy blow of her face that burnt her face completely and moved her brain to another region to show her memory loss. It is good they did not make her handicapped. LOL!! Bechari Kalpi will always be a Bechari, no memory, no identity, no parents to sob with, and no Raghav. Oh oh oh….. We feel miserable for Kalpi, but more than that, for the show EMA.  We have seen the actress Asha Negi winning hearts by her role of Purvi in Pavitra Rishta, where she complimented Rithvik Dhanjani as Arjun. But for EMA, replacements are not good, the character given to a particular actor should be allowed to them till the character dies, such facial surgeries are such a bore to look at. Asha Negi have to get the suffering, worry, emotions of Kalpi, which Rachana portrayed very well. Rachana’s eyes were very expressive and she said it all by her eyes, limiting her dialogues. Asha should portray the pain of the person who just lost her memory. She can’t just loosen the kite on a weak string. Rachana made the character of Kalpi rock and giving the role to someone else and expecting her to get into the skin perfectly is not rightly done by the makers. Asha Negi as Kalpi/Suhana have to try hard to win the hearts of the viewers, which beats only for the original Kalpi, Rachana Parulkar.

On the other hand, its reported that Shaleen Malhotra, of Star Plus’ Arjun fame, will be donning the lead role as Kalpi’s love, either as Raghav or any new character. He will be making Ashish’s way closed for EMA as the makers might end Raghav’s character by showing dead. Well, its good if Ashish’s stays away from EMA, as we don’t have a strong heart to see him romancing Asha Negi. Sad to say, but EMA makers are really testing patience of everyone. They should better open a pathology lab if they love to keep doing tests!! And the reckless thing here is, they are not rectifying any errors even after their so called testing phase. Anyways, who worries for the empty box to be stolen now as all the content is already gone in the form of Rachana and Ashish’s exit from the show. We just wish those two gems to shine in their best make and their next endeavors. We hope Asha lives up to high expectations from everyone. Keep Tellyreviewing!!