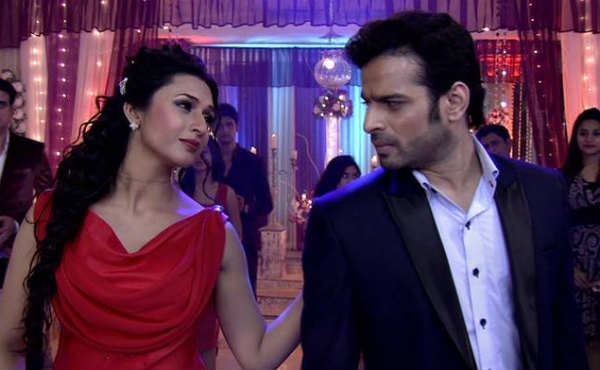 Raman and Ishita have gone a bit ahead and came to gifting phase to follow their boozing love. Raman wants to make up Ishita’s mood and brings a gift. He asks her to open it and she is shocked to see a bathrobe and it does not come alone, it comes with Raman’s taunts to wear the bathrobe when she has to stitch her blouse in mornings making it an odd moment. Ishita is partly touched by the gift and gives him a return gift to settle the scores. She gives him a black eyemask asking him to wear it and sleep at night, and relax his eyes from watching cricket and staring at her in mornings in odd moments. Raman tells her a big thanks for it, as he was thinking to buy one as he does not want to see her face when he turns her side. They both start arguing on their unique gifting sense, and depict a strong bond again. Way to go Raman and Ishita, a start has happened and soon they will be seen walking hands in hands.

Suraj dislikes Shagun and notices how cleverly she is fooling Ashok since 5 years and making him take the responsibility of Raman’s son Adi. He calls Shagun a gold digger and asks Ashok to just dump her finally, as its high time and he has to move on. Ashok hides his intentions of ditching Shagun, as he wants to take Shagun to the hill top to push her down and break all her dreams. Ashok is eyeing Mihika and wants to teach Raman a lesson by hurting Ishita and Mihika. Shagun is clueless about Suraj and Ashok’s talk about her. Ashok calms Suraj and asks him to trust him, as he has something in his mind regarding Shagun.

On the other hand, Mihika is unaware of Ashok’s dirty plan against her. Raman comes in Ashok’s party after knowing his link with Suraj. Raman insults both of them, and throws the cake on Ashok’s face ruining his birthday and giving them some much deserving taunts. Raman asks them not to trouble Ishita, else he will bring them on roads and ruining all their business empires. Raman is bouncing high as he has already made a strategy against Suraj to make him beg to Ishita for forgiveness. Suraj feels humiliated again and decides to end Raman and Ishita’s chapter. What will Suraj and Ashok do now? Ashok will strike a deal with Raman asking him to resign as President from Delhi Entrepreneur Assocation to get back Ishita’s license. Raman readily agrees for his lovely better half, shocking Shagun who witnesses Raman’s love for Ishita. Shagun starts regretting to leave Raman for Ashok. Where will Shagun go when Ashok dumps her? After Mihir instilling Raman about his concern and love for Ishita, will Raman get ahead and profess his love to Ishita? Keep reading.