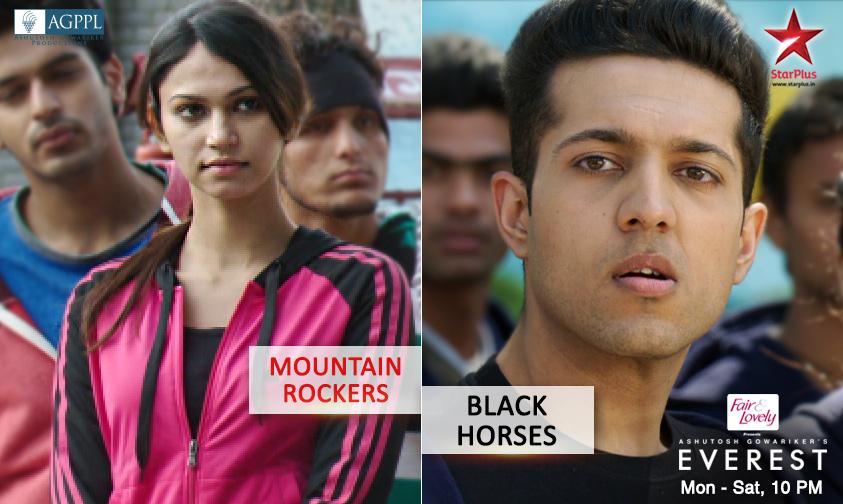 The NIM training goes into its second week with mountain rockers (MRs) coming first in the 1st week with 25 points while Black horses (BHs) got 20 points. Pari had tried to create misunderstanding between Mansi and Anjali since black horses were punished by Colonel Abhiyankar for hurting Raman. Siraj was fine in knowing what Mansi thinks and her love for him after Anjali and Aakash’s support. He then goes ahead to give a sort of lesson to black horses and removes the laces from their shoes, thereby making sure that they report late for the Tekla mountain trekking & climbing training. Black horses – Kabir, Pari, Sangy & Co reports late without their shoe laces and gets punished in marks deduction by colonel Abhiyankar and also needed to carry MR’s ropes. Anjali though initially didn’t support Siraj and Arjun’s mischief since she wanted to employ talent and hardwork but soon gets in the same vein and laughs on black horses. Now, Black horses are in a stronger mood to take revenge and Kabir threatens Anjali directly. Arjun suggests to Anjali that its good to be bad sometimes and further adds that even fairy tales have villains who attack often. Thus, Arjun is piggybacking his support to mountain rockers when needed and giving them apt consolidation. Both teams are told about real mountain climbing (with harness) and need to take out a yellow flag after reaching the top and the one covering more height is the winner. Moreover, there is individual marking and the real-life mountaineering training will assess the physical fitness and teach the students about planning, conservation of energy and balancing. Pari and Anjali are seen climbing and midway Pari decides to harm Anjali making her loose as well to put her in physical danger. She puts force on the ropes which exerts much pressure on the harness support atop the mountain thereby making the equilibrium goes haywire which in turn effects Anjali. Anjali’s balance goes for a toss which makes her slip and is falling down with little harness support. How Anjali will save herself – employing balancing/survival technique or some external support from Arjun, Aakash or Abhiyankar ? With this dangerous activity, black horses are bound to get punished and loose even in the 2nd week and moreover will face Colonel Abhiyankar’s ire and displeasure with good reigning supreme over bad.

Coming to colonel Abhiyankar’s teachings, he continues to inculcate the fundamentals of mountaineering to students and spoke about some rules – Passion (journey & experiences); no guts, no glory (devil is inside of us); Team spirit & friends (mountaineer will never betray his team), no indiscipline. He is also inching closer to Anjali and suggested her to not over-think after learning about her Everest dream. For him, personal Everest is to give good training to his students, and also give all support to Arjun’s training for his Everest expedition. It has to be seen whether he will come forward to give more personal attention to Anjali as well. He informed Arjun about the difference between confidence vs. overconfidence, and gave analogy of life and death so as to highlight. At Arjun’s end, he thinks Anjali is also like him since both are talented and passionate. Soon, he learns about her Everest dream and wonders how come she can leave to Everest expedition just after N.I.M training. He speaks about his own experience of summiting 7 peaks and after then now he is preparing and going for Everest. Again, Abhiyankar steps in and informs to Anjali and Arjun that experience is fine but trying is more important and also mountaineering is from mind and over body.

Anjali and Aakash’s blossoming love shows more signs, when Nikita pampers Aakash, Anjali gets jealous after seeing them. And the same feeling arouse in Aakash when he sees Anjali getting tips and good talk with Arjun on their way to Tekla mountaineering site. Aakash at his end pulls Nikita’s leg and doesn’t give much attention. He shows more care for Anjali and during Anjali’s fall due to Pari’s severe mischief, he shows much concern and worry for Anjali. With all such developments, their unspoken love, bonding and camaraderie will continue to prosper. Keep Reading.