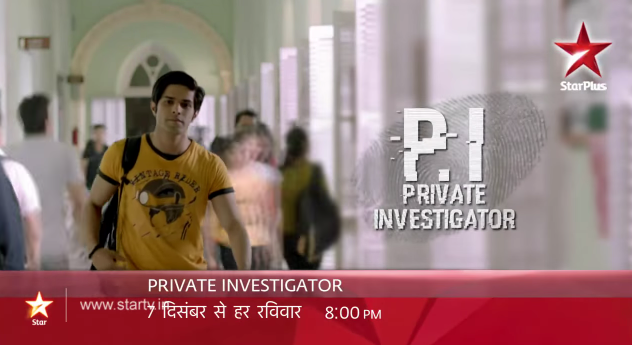 Recap: Raffe, a criminology student solves the murder mystery case with his attention to detail and also helps police Inspector Tiwari. The person doing the crime Vimlesh Patil is caught in the end and Yasmin the girl at whose home the murder took place is relieved since she is fine and doesn’t need to go back to Nairobi. Raffe’s mom Anita  finds him assisting the police and calls Vijay seeking some help.

The story starts at the city museum and the guard finds a mummy going away after coming out of the casket. Raffe at his end wakes up in the morning and is told to hurry up by his mother. Raffe gets a call from his friend Raghu and he informs him of going to the museum. Raffe takes breakfast and speaks of not taking a bath and is going to museum to see Egyptian Mummies. Raffe’s mom pulls his leg and asks about his girlfriend. Raffe comes out and soon meets Sonu and Raghu and shares Parata (Roti, breakfast food) with them. He goes with them to the museum while his mom watches him and smiles. Raffe speaks on how bodies were preserved in ancient Egypt and they are called Mummies and informs Sonu. Vijay is going for a meeting at his end. Raffe reaches the museum and finds police barracks there and soon learns about the theft. Sonu wants Raffe to come with him but Raffe wants to enter the museum and soon gets entry there on the pretext of meeting Inspector Tiwari. Tiwari is seen there and being informed that Mummy and specter have gone and also the security guard is missing. He meets Ana Damcot – Art Historian who lead the exhibition in 5 countries before coming to India and a foreigner man Abu Aman speaks that scepter is very valuable and costs 7 million USD. The man (director of Museum) informs Tiwari that the scepter has a curse. Tiwari gets a call from his boss and suggests that the matter is small. He starts speaking with Raffe and suggests that a fool will steal the stick (specter) which is having a curse. Raffe asks what was the curse but Tiwari doesn’t know and does not have clues either and wants Raffe to leave from there.

Raffe looks at the museum and then introduces himself as Tiwari’s nephew to Mohan – the security head. Mohan speaks of not knowing how it happened and saw CCTV footage to find that mummy walked away with the scepter and Raffe is puzzled. Sooner then, Tiwari, Raffe and Mohan finds a dead body in mummy look at the backyard. Mohan is being taken to task by his boss and Ana and other foreigner Abu thinks that the museum director and his men are irresponsible. Raffe comes home and watches the news about Egyption scepter theft and about the curse. Raffe rubbishes these news and calls it as drama but his mom suggests that curse can have an impact and shares a story. Raffe thinks that the scepter is stolen because of its worth and then uses Google search and then in the night arranges all the clues – security head, mummy walking away, curse.. but couldn’t find an answer. Next day, Raffe meets Raghu at the college who speaks of waiting for a girl Dhanalakhmi Rajalakshmi from Bangalore and asks for Raffe’s help in how to speak to her.

Raghu soon meets Dhanalakshmi who calls herself as Lucky. Raghu speaks that he is very lucky then and wants to get called Rag and also introduces Raffe. Raghu informs that Raffe has to go and collect the fish from the market and then leaves with Lucky. After a while, Raghu meets Raffe at the fish market and informs that lucky went for kick boxing. Raffe speaks of knowing how theft have happened and by simple logic that it is stolen by security staff. The mummy was first stolen and then the man who stole it himself become the mummy so that in the night it can be taken away. Raffe thinks that there was someone else who helped that person but their plan didn’t went smoothly since the guard saw them and he was killed and wrapped in the same mummy clothing. Raffe speaks of having suspicion on security head Mohan and he is the one who can tamper security systems and also the walking style of mummy and Mohan was the same. Vijay was following Raffe and soon bumps into him and Raffe’s phone falls on the ground and he soon picks it up. Moments later, Raffe finds Tiwari at the same market place and asks him whether mummy’s thief has been found. Raffe speaks of having suspicion on Mohan while Tiwari speaks to the fish vendor women and asking her to give discount for his fish.

Tiwari speaks of closing the case since Mohan just died and thus Raffe’s suspicion on him is gone. Raffe tries to praise Tiwari and wants to go to the crime scene. Tiwari and Raffe goes to the Mohan’s room where he is found dead and Raffe finds 2 cups of tea and plastic flowers. Tiwari gets a call and informs to his boss that the case is closed since the thief is caught and also the scepter is found. Raffe gets more clues like Mohan’s dead body is seen holding the cigarette in right manner unlike the earlier time. Raffe meets Ana and other foreigner man Abu and introduces himself as the criminology student assisting Inspector Tiwari. Ana thinks to first check whether the scepter is real or fake. Raffe finds a box there with Mumbai Dockyard permit and remembers it as clue. A specter specialist Jatin comes to verify whether the scepter is original or not. He checks it and informs that the scepter is original. Raffe is surprised and Tiwari speaks that the case is closed. Later, Raffe meets Raghu and informs that the clues are not matching and who has killed Mohan but the autopsy report suggests that he got heart attack and also scepter is found at his home. Raffe speaks that Tiwari has closed the case and Raghu wants Raffe to keep his mind open. Vijay calls Raffe’s mom Anita and he asks about her work and she replies on working at Mumbai Institute of Social Sciences. She is reading a murder mystery book of Agatha Cristie. Raffe gets a dream of how he has asked about his father and when he was a child his mom said to him to not look behind and the blast with the car. Raffe wakes up and his mom asks whether he got the same dream and she tries to motivate him that at the right time all things will come in front. He speaks of being 20 years old and wants to know about his dad.

She replies that he will be like 2 yrs for her even now. Next morning, Raffe wakes up and reads the newspaper that the curse has strike again and goes to the murder scene. Tiwari is also seen the crime scene and it turns out that the scepter specialist jatin is killed because of the curse. Raffe looks and cites that it is a murder and Tiwari doesn’t listen to him. Tiwari gets a call that the scepter is fake and they got this info from Egypt and wants him to work on finding the real one. Raffe says that jatin was murdered because he knew that the scepter is fake. Raffe leaves and goes to ask his lab incharge whether there is a liquid which will increase heart rate very rapidly leading to death. Raffe learns that there is a flower Oliander which when consumed have the same symptoms causing death with fast heart rate. Raffe goes to inform Raghu who was with Dhanalakshmi that the murder weapon is found. Raffe speaks that Mohan and Jatin have conspired in the theft. Jatin first put Mohan in the casket and then Mohan walked with the scepter and then the thief first killed Mohan and the case was closed. Jatin also got killed since he also touched the scepter and all the blame goes to the curse. For knowing the theif, he wants to know who has bought the flower Oliander. Raffe reaches the nursery and informs about the toxins in that flower to Dhanalakshmi, The thief first put that flower buds in Mohan’s cigarette and then put it in Jatin’s alcohol. Raghu comes there and speaks of not finding Oliander and then offers a flower to the Dhanalakshimi aka Lucky. Raghu starts googling and Raffe wants to know the background of Ana and the foreigner man Abu Aman and wants to know what they were saying is indeed correct.

Raffe learns that both Ana and Abu have been transferred from Amsterdam and they didn’t share that info with the police. At the nursery, Raffe finds the oliander flower and the nursery man speaks that the delivery was being brought at the dock yard and that boat’s name is Ali Baba. Raffe looks at the dock yard from the bridge and informs Tiwari that the theif will run from there with the scepter. Tiwari and Raffe are seen as municipal worker men and Tiwari asks Raffe how come the international thief is going through the sea. Raffe informs that at the airport there is lot of screening and thus the thief wants to go through the boat. Raffe sees the boat and suggests to Tiwari that the boat will take the thief to a Yacht which will take him outside of India. Raffe looks at the people and soon find Ana with a scepter bag and runs to her. She sees him and tries to run but gets hit by a car. Raffe and Tiwari are shocked to see her end. Tiwari asks Raffe whether the curse exists or not ? Tiwari speaks to the media on how Ana stole the scepter with Mohan and the scepter specialist Jatin and then she murdered them. Tiwari praises the Indian police and suggests that they are not lesser than Scotland yard. Raffe at his home speaks that when joining life puzzles sometimes we see unexpected things. During his search to find thief, he found a women thief and wonders what else he will see.

Next Episode: Raffe attends a success party of a movie and the actress makes announcement about it. Raghu asks Raffe whether he got clue and he replies Ka Ka Mala wa… Raffe meets a girl but she doesn’t want to talk to him. Raffe meets Vijay who asks him to apply his own mind since he is th P.I. and also the case belongs to him. 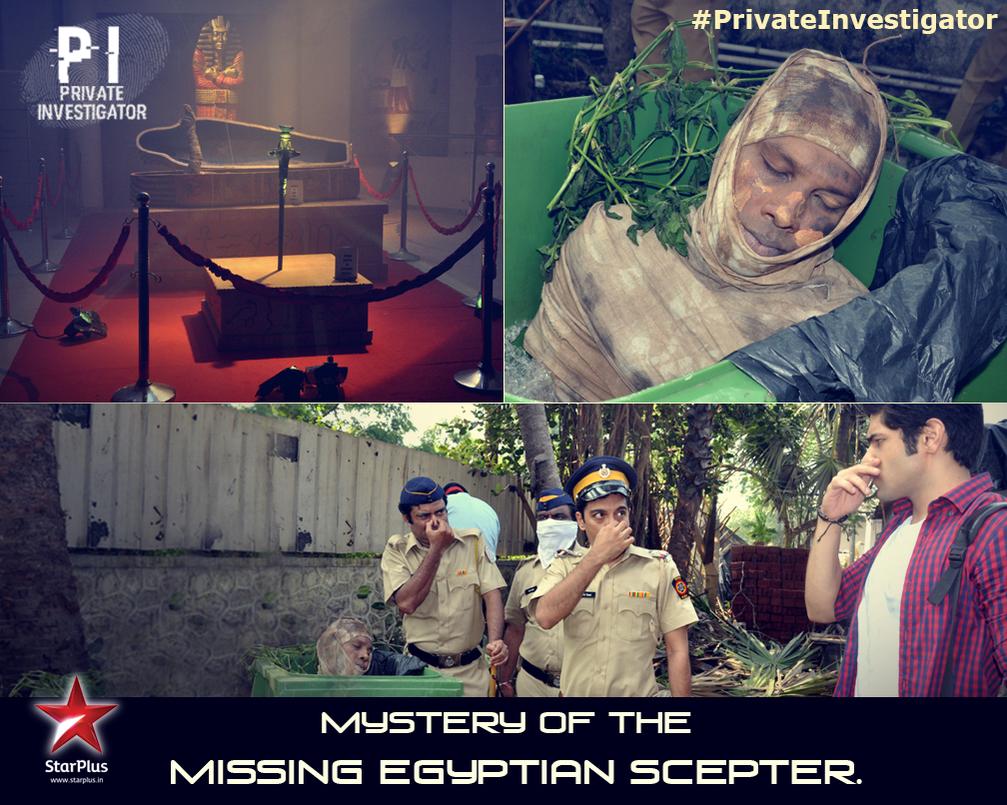 Additional Note on Cast:
* Dhanalakshmi Mahalakshmi is portrayed by Actress Priya Chauhan
– Priya is originally from Shimla and now lives and work in Mumbai.
– Role of Alina Khurana in Star One’s show Pyaar Kii Yeh Ek Kahaani (2010-2011).
– Worked in Jaane Kahan Se Aayi Hai movie (2010); Role of Taani in Sony TV’s Kya Hua Tera Vaada (2012-2013)
– Worked in Yeh Hai Aashiqui’s Episode 31 in the role of Priya as party escort and also worked in MTV Webbed (2013)
– Recently worked in Bindass’s Yeh Hai Aashiqui Episode 53 aired on 27th July 2014 in the role of Priyanka opposite a young boy who is a writer who wrote Promises and Lies novel depicting their love story. If interested, read that episode’s WU on our site here.
– Priya’s Twitter page