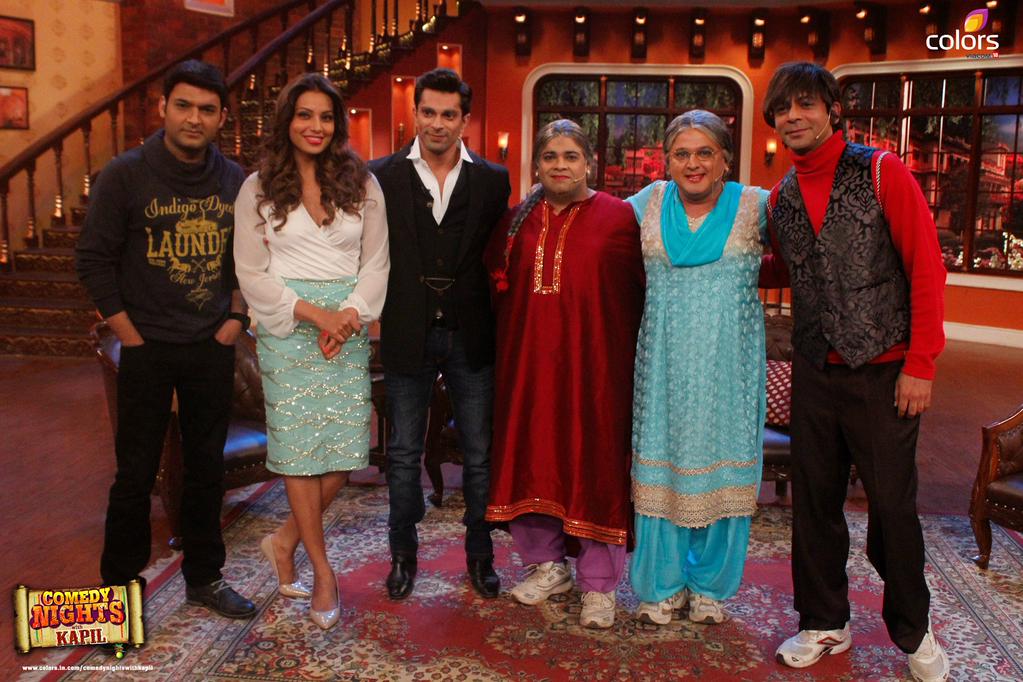 Kapil starts the show and starts speaking that the people blame the govt for any reason and cites an instance of a Tendua (panther, Cheetah) coming to the city and the people blames the govt for his presence. Kapil asks whether Tendua listens to people before coming to the city from village/forest ? He also suggests that the people blame govt for overpopulation but the actual case is people are responsible for it and not govt. Bua and Daadi make their entry and Daadi informs of fixing the marriage of Bua. Bua wants to know the qualities of the boy and she will say either Yes or No for them. Daadi says the boy is alive and he has some conditions like the girl should be having musical knowledge (sur). Bittu makes a taunt on Bua’s capabilities. After a while, Kapil comes as Qawwali man and carries a harmonium and dressed accordingly. Qawwali is a form of sufi devotional music popular in South Asia. He makes a joke on whom he loves. Bua calls the Qawwali man as liar. Sooner then, a old man comes with his son and gets greeted by Daadi. They want to hear a song and Daadi wants the Qawalli man to sing a man but he runs away. Bua is made to sing the song and she tries to sing but couldn’t move forward and then just dances while Bittu aka Qawwali man sings the Baby Doll song adapted for Bua, and making taunts at old man and his son.

Bittu with Guests for his magazine Interview and their interactions with family and audience
Kapil speaks that the guests on the show are very hot and share a sizzling chemistry among them. He welcomes Bipasha Basu and Karan Singh Grover. Bipasha and Karan comes on stage and greeted by Kapil. Bittu plays a prank with Bipasha by taking her to the kitchen on the pretext that she should give a demo in cooking and after going there she finds a masked creature. She runs from there after getting scared. Bittu suggests that she makes people scared with her horror movies and asks how come she got scared with a small prank. Bittu then wants Bipasha to give a score out of 10 for his co-stars’ hotness and he will mention those names. For Anil Kapoor, she replies 7, Hrithik – 10, John Abraham – ? She didn’t answer and evade that question. She speaks of giving 10/10 to Sr. Bachchan. For Kapil and Siddhu, she gives 10/10 making them happy. Bua makes her entry and greets Karan and shows affection. She speaks of being alone to Karan. Bittu makes a taunt at Bua by suggesting that she is not alone but instead a loan which neither the bank wants to give nor the customer wants to take. She speaks of looking like 26 yrs though her age is 22 and cites the reason of being alone. Bittu makes another taunt at Bua by suggesting that even her shadow shows her old age wrinkles. Karan and all get laughter on that note.

Bua is angry with Bittu and she speaks her mom’s age is 60 yrs and assk him whether she was born with an advanced delivery. Bittu asks whether Daadi is aged 60 yrs and goes on to comment that he has seen a group photo of Daadi’s school. Daadi is seen standing with Tatya Tope [maratha leader] on lighter note. Bua leaves from there while suggesting she has a zero figure to Karan. The show ends with Palak, Daadi, Bua grooving with Bipasha and Karan on their song Touch My Body from their movie.

Additional Note:
* Alone is a debut movie of Karan. Scheduled to release on 16th January 2015.
– Bipasha portrays the role of Trouble Twins Ghost of Sanjana/Anjana, and Karan plays the role of Kabir.
– Alone is a remake of 2007 Thai film with the same name. There are remake in Kannada, Tamil [Charulatha, 2012] and in Malayalam [Geethaanjali]. Alone, 2007 Thai movie’s plot is loosely based on Agatha Christie’s book, Elephants Can Remember

* Tatya Tope (1814 – 18 April 1859) was an Indian Brahmin Maratha leader who took part in the Indian Rebellion of 1857 and one of its more renowned generals. His Wikipedia page.