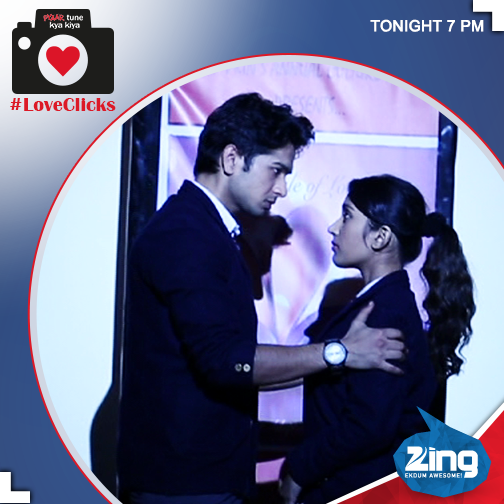 Meiyang Chang (the host) speaks about love at first sight and suggests that it is also true that sometimes it take many years to fall in love. He thinks for some people friendship is love. Today’s story is about two friends Arjun and Aditi who are studying at a boarding school in Dehradun. The story starts with Arjun and Aditi practising for a theatre play and are seen together. Arjun gives an emotional last line and his friend asks how come he has done it. Arjun then speaks that the line is for his life heroine. Aditi leaves from there as she needs to go to hostel. Arjun is being told about peer pressure and his friend suggests that he needs a girlfriend. He gets advised that Aditi aka Addu likes him. Arjun replies that Aditi is his childhood friend and then wonders but his friend insists that he should date his best friend which is Aditi. Arjun tries to accept his friend’s suggestion. Sooner, Aditi comes there and they go together on bikes. They spend more time together in the class [Kabhi Kabhi.. Aditi song plays] and his friend continues to push him towards her. He tries to come close to her but she doesn’t understand his moves. Later, they play basketball and he falls down and gets hurt. Aditi tries to shower much care and concern and he informs her that he is fine.

Later, he comes to her room and finds Aditi to be upset. She gives him the letter from a publication who has rejected her story. He asks her to not worry about publishers and wishes that her story will be published. He brings chocolates for her and she is surprised to see it. Arjun gets a call from his friend Sonu who informs that a junior Karan is turning out to be their senior in terms of dating a girl. He asks Arjun to come to the party where they will find respective girls for them. Arjun declines to attend the party and he begins to talk with Aditi. He informs her that other friends bully him by suggesting that he is not just friends with her. Arjun tries to suggest that there is more than friendship and then speaks of liking her. She thinks he is kidding and he takes out a flower and speaks of proposing to her. He siggests they can become boyfriend-girlfriend and there will be lots of fun. With some hesitation, she agrees to him and feels shy followed by a hug [Bas Mein Aur Tu song plays]. Aditi and Arjun are seen walking together and everyone are surprised to see them. He takes her to the open cafeteria and brings a cupcake and they ate it together. Sonu tries to inform Arjun that she is a different girl. Later, Arjun comes to drop Aditi at her hostel and is about to kiss but she runs away and soon comes back to give him a hug.

Meiyang (the host) speaks that Aditi became the girlfriend of Arjun but she doesn’t know the real reason of him which was peer pressure.

Arjun meets his junior Karan at the school who asks him whether he is still a virgin and pulls his leg. Soon, they find a new girl entrant Roshni and gets mesmerized and thinks she is hot. Arjun, Karan and Sonu all get much awe with her. Later, Arjun takes Aditi by bunking the class and brings her outside. He starts to kiss her but she stops him. He speaks of loving her but she continue to suggest on not liking it. He again tries to kiss and she replies of not being comfortable. She thinks they can wait until marriage and then can have kiss. He reminds her they are 17 yrs old  and calls her boring. He then opens up and suggests on wanting to have fun and calls her Behenji and even her attitude the same. She begins to cry and he speaks more that she doesn’t deserve him and they aren’t a match. She slaps him and he leaves. Arjun’s friend Sonu comes to Aditi and supports her. She thinks on losing her best friend and also reminds that she has loved Arjun. Next morning, the new girl Roshni is approached by Arjun and gives her the directions since she was asking it yesterday. He follows her and learns that she came to the rehearsals place to audition for the Juliet role. Soon, she learns that Arjun is portraying the role of Romeo. She gives a good audition and gets selected. He thinks for bringing on stage chemistry they can spend time outside and calls it method acting. She suggests he can drop her home and he readily accepts. He takes her to the open cafeteria and there finds Aditi as well. He offers a cupcake to Roshni and takes selfies with her while Aditi looks at them from a distance. He also looks at Aditi too. [Saajna plays]

Meiyang (the host) speaks that Aditi was heart-broken and got more dejected to find Arjun has moved on just one day after the breakup and was found with Roshni. For Arjun, he was thinking to have a hot and bold girl Roshni and was quite content.

Arjun is having difficulty in his play rehearsals and the play director is annoyed with him as he keeps forgetting the lines. Aditi thinks there is nervousness since the play is scheduled next day. Roshni leaves Arjun and asks him to first remember the lines and declines his offer to go out. Aditi comes there and asks Arjun about his problem. Arjun speaks of having problem with his dad and she suggests that he need to understand his dad. Sonu comes there and speaks of searching for her and reminds Arjun that Aditi was his ex-GF. Next day, the play is about to start and Arjun is seen with Aditi in the make-up room. Roshni comes there and asks Arjun to get ready for the rehearsals and he leaves. Roshni reminds Aditi that Arjun is her boyfriend. Aditi replies that everyone knows that Arjun is her boyfriend but Roshni counters by saying that Aditi still believes that Arjun will come back and they live happily thereafter. Roshni suggests to Aditi that she hangs out with Sonu to make Arjun jealous and calls it as drama. Sonu comes there and Roshni tries to demean him and also Aditi. He speaks in high voice against her and Arjun makes his entry and asks Sonu on how he is speaking with Roshni. Sonu reminds on how Roshni was speaking badly with Aditi but Arjun doesn’t listen and pushes him away. Aditi comes to defend Sonu and Roshni blames Aditi and takes Arjun away. Sonu informs Arjun that he doesn’t deserve any girl given the fact he has hurt Aditi. Arjun comes to another class with Roshni and reminsces good moments he shared with Aditi, his love confession, his hurtful words during the break-up, Roshni’s and Aditi’s words, and contemplates on his thoughts. [Darmiyan.. Benam Rishta Woh.. song plays].

He comes back from his thoughts and Roshni hugs him and suggests why he get affected much. He peaks of getting affected since he loves her much. He speaks the line – I love you Addu and Roshni learns he doesn’t love her and leaves. Arjun comes to meet Aditi but she is not interested to talk. He tries to get support of Sonu and calls himself stupid and even apologizes to Sonu. Sonu advices that he should go and apologizes to Aditi and has hurt her and also her self-esteem. He reminds Arjun that she understands him well but what he has done to her and has expected things which she doesn’t prefer. Sonu speaks that Aditi loves him. The Romeo-Juliet play starts with Romeo wants to stay with Juliet while she is afraid since her mom is calling her. Arjun as Romeo is glad to meet her mom played by Aditi. Aditi as Juliet’s mom comes there and he forgets her play name. He begins to speak the dialogues as Arjun. He apologizes to her for hurting her feelings and keeping bad thoughts. He asks whether she will forgive him. Juliet’s mom aka Aditi forgives him. Moreover, Roshni as Juliet apologizes to Romeo and her mom and then speaks of making a dive from her balcony to find her prince charming. The curtains are down and Arjun and Aditi come closer and he speaks of waiting until marriage for their love. Both hug each other to become lovestruck. The story ends on that happy note.

Meiyang speaks that Arjun understood that Aditi will stay with him forever and Roshni can leave him at any time. He suggests that in love or relationship its not needed to be intimate or get physical since there is much more to it and he has seen such thing in Aditi’s love. He asks viewers to share their opinion on what they would have done if they were in the place of Arjun and Aditi using the hashtag #PTKK on Zing TV’s Twitter and Facebook pages.