Mrs. Bhalla and everyone cry at home after Romi’s medical weakness. This breaking news makes her worried. She goes to meet Sarika and begs her to marry Romi, and apologizes to her for her rude behavior earlier. Sarika realizes the family came to know about Romi’s state and got after her. Mrs. Bhalla bends infront of her and asks her to give one chance to Romi and them, promising her lifetime happiness if she gives them their heir. Her true to life liners melts Sarika, and she takes time to think about it. Ishita goes to Ruhi’s school and meets Vandu, who came to pick Shravan. Ishita hugs her and goes to get Adi and Ruhi home. Shagun makes a vamp entry and takes Adi pulling him while he eyes Ishita, thinking about who’s right after Rinki’s marriage drama.

Everyone celebrate Holi ka Dahen, and the couples do the puja. Aman and Ragini do the puja, while Neil does puja with Nivedita, though his heart still beats for Ragini. Whatever the problems come, Neil and Ragini would be getting together soon. Neil has all his attention on Ragini, even when Nivedita is with him. Even Ragini looks at Neil much to Nivedita’s dislike.

Panchi tries to get closer to Titu and he does not know about her romantic dreams. She fails as Titu is always surrounded by his family. Surekha and Govind try to hide Titu’s laziness from Panchi, while Rekha finds a good partner in Manorama to expose Titu and ruin Panchi’s happiness. They make a plan seeing Panchi make Prasad for the puja, and ask her to take Titu’s help. Titu unknowingly drops the Prasad and Panchi gets annoyed thinking why did he not try once to save it. Rekha and Manorama start filling Panchi’s ears against Titu, but she does not fall prey. Govind tries to answer Panchi’s doubts and helps her to reconcile with Titu.

Chakor gets Kasturi’s blessing as she begins to go to school. Chakor knowing well about Bhaiya ji’s double-faced truth in how he presents himself goes to meet him to ask for his blessing. He is shocked to know about her enrollment since he haven’t paid the fees. Nevertheless, Chakor is excited to go to school and her determination is not going to stop and ready to face any new challenge that come on her way.

Helena’s soldiers attack Dharma in the forest by tricking her first. Dharma is believed to be killed by the soldiers as they attack on her face but it is not sure. Chanakya learns about possible Dharma’s death from Radhagupt [with her ring found near dead body] and also Bindusara. Meanwhile, Ashok starts his study at the royal school and is learning sword fighting to protect his mother Dharma and going against her since she wanted non-violence and peace life. Nonetheless, he also comes to know of Dharma’s death news and is distraught. Bindusara goes to see the dead body and vows to take care of the responsibility of Ashoka. Dharma is believed to be dead as evidences – rings, bangles point in the direction but Acharya Chanakya have been keeping an eye on Helena and her ploy. He also wants to see Ashoka fight for his mom and carry on his duty by waiving off his promise on non-violence. How the truth about Dharma gets unravelled?

[youtube id=http://youtu.be/Zvxcg6cxuT0]
– Ashoka gets teary eyed and plans to leave Pataliputra after believing Dharma’s death. Chanakya tells his spies to keep an eye on Ashoka and make sure he doesn’t leave the town.
http://youtu.be/EUN5K5yU6QA

The show went through 11 year leap. Anandi’s daughter Nandini aka Nimboli have gone through a child marriage and lives with her husband Kundan and his family. Nimboli faces many challenges there while her childhood dreams are not getting fulfilled. Kundan tries to tease her and wants to make sure she gets some scolding from his parents. Nimboli is naughty and mischievous while Kundan carries some attitude and roughness. As she plays Holi with her husband with childhood innocence, her mom-in law finds it to be not amusing. Nandini gets caught and punished with her hands tied down and water is thrown at her. This is the beginning of new chapter in Nandini’s life of being in child marriage situation. 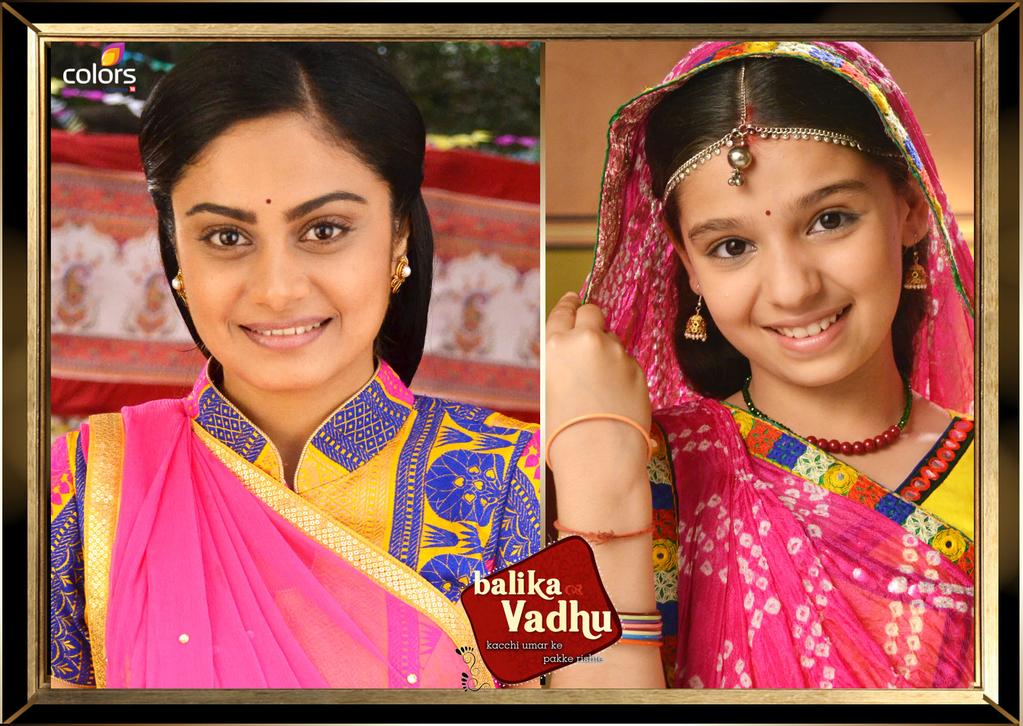 Sid and Roshni get drunk and get intimate, forgetting all the differences and their romance will be high as their loves is revived again. Roshni is mistaken about Sid again and fires some dirty remarks on him. Sid loses his temper. Sid was arranging for her Grah Pravesh and was very happy, but it takes a U-turn again. DD and Roshni reach Sid’s home for his arrest. Sid comes to know of DD’s kidnapping charge and Roshni’s accusation on rape. He gets heart broken and decides to break all the relationship with Roshni. Sid didn’t stop there and pinpoints all of Roshni’s weaknesses – ego, weak trust in him, believing others easily and falling in traps/trickery. He says he will not bear if she stains his love and scolds her for having such filth in her mind against him.

Veera gets drunk by much Bhaang intake and she creates a huge drama scene by dancing and getting closer to Baldev, infront of all the elders and irks Manjeet Tai ji the most. Baldev tries to control Veera’s behavior and she acts more silly, admitting her love to him. She plays the Dhol and hugs Baldev. She gets a chance to romance and Baldev too supports her, going against Bansuri and Manjeet. Veera does not realize she has drunk Bhaang instead of the regular Thandai. Baldev colors her face and they play Holi together. Manjeet is the one who has mixed the drugs in Veera’s Bhaang to make her lose her senses and prove her to be a bad wife for Baldev. Her plan fails and this step brings Veera and Baldev intimate. Meanwhile, Gunjan’s miscarriage happens after she decided to keep her baby. Ranvi and everyone request the doctor to save Gunjan and the baby.

Urmi arranges a surprise for Ishaan and wears the evening gown he gifted her. Ishaan comes there and is surprised seeing the beautiful arrangements. She clears his annoyance and holds her ears to apologize. He likes the heart shaped balloons and flowers, and hugs her happily. The misunderstanding gets cleared between them and she wishes she gets Ishaan’s friendship as a gift. He forgives her and they have a dinner date. He loves her a lot and compliments her thankfully. This turns out to be Urmi’s dream sequence, as Ishaan’s entry and his anger makes her upset. He does not get happy and leaves with his annoyance.

Nisha celebrates Holi with her family and sees her cousins being so happy and playing Holi. She stays aloof and recalls her first love Viraj. She imagines him everywhere and gets sad. Nisha smiles seeing her family’s happiness, and she regrets to get married to Kabir by mistake. Everyone knows that she is still in love with Viraj. Viraj really comes there in the Holi function along with Kiara. Kabir will soon leave after uniting Nisha and Viraj. Kabir who became Nisha’s husband by default will have his track ending, making Nisha free from the unrealized marriage.

Gopi meets her daughters being unaware of their identify. Meera hits Gopi by her scooty and she falls on the road. Vidya runs to help her, and does not realize she is their mum, as Gopi’s face gets all the mud on her face. Jigar then helps Gopi and takes her along. Vidya misses to see even Jigar. This hit and miss scenes are going to create more suspense.

Ranvir and Ishani perform on a romantic song on their dinner date. Ranvir confesses his love and gives her roses. He gives her a series of surprises. Ishani gets glad, but her happiness will be short-lived as Chirag returns again with his revenge plan. Chirag tried to harm RV at the movie theatre but ran away as RV’s dad made noise. RV takes Chirag’s threats lightly but he doesn’t know that Chirag is adamant on harming him. Chirag gets another opportunity to harm RV after tricking him. He attacks RV and going to succeed in his ill intentions. How Ishani react to see RV falling in Chirag’s trap and getting harmed ?

Minty starts digging up Rajat and Anu’s relation by using innocent Veer. Anu promises Rajat about lunch, and Minty makes her busy in work and sends her off to market, stating she is not well. Minty then tells Rajat that Anu has gone for lunch date with Veer and fills poison in his mind. Rajat comes home and does not find Anu, and falls in Minty’s words. He gets raged and decides to confront Anu and Veer. Minty stops him thinking the right time has to come for some mega shock that breaks Rajat and Anu’s marriage in one stroke.

The show will be popular for its non stop kidnapping drama and Pragya and Abhi’s stupidity. They reach the Dhaba and the people get excited to meet the rockstar Abhi. Abhi starts eating the Dhaba food as he has put many efforts to save Pragya from Neil. Abhi asks a man to help him in making a call to home. They try finding the way home and his fans lift him, dragging him in the Holi Celebrations. Abhi dances with the people and plays Holi. Pragya is tensed as the goons come there to find them, and Abhi and Pragya run by fooling them with their colored faces. Will they get free of the kidnapping scene after this Holi dance?