Service Wali Bahu:
Payal’s marriage gets fixed and also marriage date is also discussed. They are some issues on where the pre-wedding rituals should take place with Dev’s father Jogeshwar Babu wants it at his place but Payal’s dad wants at his home [girl’s house]. Nevertheless, that issue gets sorted out with Jogeshwar Babu keeping focus on service wali Bahu and luxuries that will come along. Next in the track is the engagement preparations, Payal’s mom informs her that she will not go to office even if there is urgent work. This is because Dev is going to come with his family in some time to their home. Payal informs her mom that going to office is more important to her than engagement. She cannot run away from her duty, and on that note she gives a shock to her mom and even her dad, brother and other relatives are shocked. Will Payal sticks to her decision of giving preference to duty over engagement ? On another front, Jogeshwar Babu put efforts to make sure that his son Dev doesn’t feel any bad about his in-laws since he only wants working daughter-in law Payal in his home at any cost.

Nisha Aur Uske Cousins:
Viraj agreed to get engaged to Kiara since he wants to move on and forget Nisha, and tries to deny his feelings for her. Kiara is fine with it because she is doing all such thing under orders from Gayatri. With Dada ji’s holding firm on having a full-fledged marriage, Nisha & Kabir didn’t have other option left but to keep doing all the pre-wedding preparations. However, they are also working in tandem to find strategies to stop their marriage. Nisha has already informed Kabir on having accepted the marriage truth infront of Dada ji because of her anger with Viraj and Kiara’s relationship [put forward by Gayatri]. Next, Nisha & Kabir go out with cousins to select a wedding card but she lacks interest there but nevertheless visits the shop. Dada ji told Kabir to bring his mom and he gets anxious since his mom is not there. He first comes with an excuse that his mom has gone for pilgrimage to temple. Later, he finds a lady thief and convinces her to enact as his mom for which she agrees. As marriage track opens up, there is interesting clash of marriage preparations on one hand, and Nisha & Kabir’s strategies to stop marriage on the other.

Udaan:
The brat kid Suraj who has earlier challenged Chakor on not letting her complete the homework creates more problem for her, and tears apart her notebook. She urges him a lot to not do such a thing but in vain. Suraj carries jealousy against Chakor and thus hates her. She reaches a temple and get some prasad as rice, and soon gets an idea on to make a gum paste from it, and recreates the book again. She thanks Hanuman ji for giving her the idea. Suraj didn’t stop there in bullying Chakor, and stole her shoes from the temple with his friend’s help. He throws the shoes away in a moving van, and Chakor gets much disappointment & sadness. Later, he puts pressure on Imli and bullies her with charge of stealing Chakor’s shoes. Imli gets hurt but Chakor is determined and decides to go school without shoes. Will Chakor find a ray of hope in getting back her shoes, and also teach Suraj & Co a tough lesson  ?

Diya Aur Baati Hum:
Sandhya & Sooraj attends a Puja ceremony with Bhabho in the context – Sandhya being pregnant with twins. Bhabho knows of Sooraj’s plan to give one child to Ankur’s wife Ankita since her daughter Bulbul is unwell and he justifies about Ankita’s pain as the rationale. Bhabho during puja tells Sandhya to put the protective thread on the second Kalash. But Sooraj intervenes, and informs that Ankita Bhabhi will put the second thread instead of Sandhya. Bhabho gets shock again, and asks Sooraj what is he speaking. Sooraj opens-up to her and informs of his decision to give the second child to Ankita Bhabhi. Bhabho gets more tensed and comes out of the Puja, and confronts Sooraj and asks how he can take this big decision on his own without asking her. She cannot agree to his decision, and clearly informs the same to him with her strong words. Sooraj gets nervous while Sandhya, Babasa, Emily and others are witnessing that development. Will Sooraj respect Bhabho’s decision, and changes his self stance and plan ?

Ashoka:
Ashoka continues to have the believe that his mom Dharma is alive and with his heart saying it is the truth. He speaks to Bindusara that his mom is busy and thus not present with him.  Acharya soon discovers a veiled woman closeby, and gets some hint that Dharma might be alive. Dharma also looks at Ashoka and Acharya, and gets shocked. Will Ashoka finally come closer to meet his mom Dharma, and his undying believe of her being alive coming true ? Ashoka’s special episodes about Dharma and Ashoka are from 19 to 20th March 2015.

Doli Armaanon Ki:
Ishaan and Urmi have spoken the three magical words – I Love you to confess their love for each other. Samrat gets agitated and Urmi gives him a fitting reply and thinks now his ego and male chauvinism has taken a severe beating. She is glad to have realized her feelings for Ishaan, and starts loving him much. She prepares to consummate their marriage with the Suhagrat [maiden night after marriage] night and waits earnestly for Ishaan in their room. Urmi now is only having dreams of her better-half Ishaan. The night have passed by but Ishaan has not arrived thus cutting short Urmi’s happiness. It turns out that Samrat has stopped Ishaan so that he doesn’t reach Urmi. Urmi is hopeful to have her marriage consummation with Ishaan, and her strong spirit providing good support. Samrat is working in tandem with Damini, and thinks their partnership eventually going to help him more. Ishaan’s dad Anirrudh, Sanaya are happy to see Urmi & Ishaan together but the larger question is Samrat continuing to pester Urmi. What will be Urmi & Ishaan’s defiant move to counter the trouble-maker Samrat ? 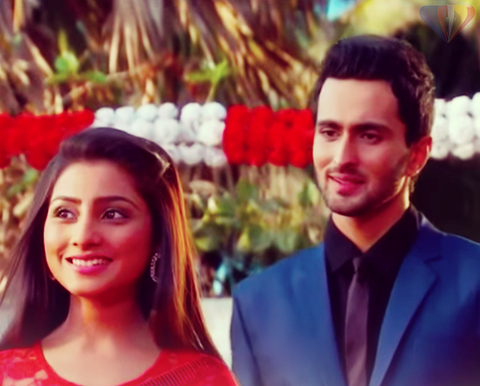 YRKKH:
Muskaan was worried a bit because of her motion sickness and family rituals at Alok’s family home before marriage but gets strong support and assurance from her brother Naman. She gets relieved and the minor issues with coconuts and rituals are resolved. Next in the track is Alok and Muskaan tying the nuptial knot with their marriage getting realized. The marriage took place in a pompuous way with everyone having much joy and happiness. Alok first came to Akshara’s home to get Muskaan with his Baaraat in Band Baaja Baaraat style. Devyaani does Alok’s Aarti and welcomes him inside with much love for the wedding. Alok and muskaan get married with all rituals. After the wedding comes the Bidaai moment, the mother-daughter duo Devyaani – Muskaan get teary eyed and also cry during that moment. Akshara and Naksh also provides their blessing and support to the newly married couple.

Jamai Raja:
Roshni has won the best bahu in Shringaar competition thanks to Sid who has helped her in getting make-up and shringaar. The occasion was organized by Punjabi women’s association, and it again paved the way for their sweet Nok-Jhok and fights with love continues to be the binding element. Sid has helped her in putting Jhumkas, Bindias, necklace and even hair set-up. After winning the best bahu title, out of buoyancy and happiness, she showers a hug to him and soon both realize it was not supposed to do there in public forum. Nevertheless, Sid & Roshni are coming closer with such happy instances.

IKNMP:
Suhani is taken to the hospital by Ragini though she doesn’t know her real identity and relationship. Meanwhile, Neil is on the lookout for Suhani after she was not seen at the arrivals in airport. He wants to give Suhani all the love which he has not given her until now, and only provided financial support. It turns out that Ragini comes to know of Suhani getting kidnapped, and is taken in a car. She gets worried since the same morning she has taken her to the hospital. She is present with Aman and both follow the car to reach the godown where Suhani is held captive. The kidnapper there shots at Suhani as she was running away and in the process gets injured. He then shoots himself down. Ragini helps injured Suhani and takes her to the hospital where she gets immediate treatment, and Neil coming to know of it as well. Suhani’s entry is connected with the past of Neil & Ragini and also related to their divorce. In the ensuing track, the flashback scenes of Neil & Ragini are going to be shown which unravels Suhani’s connection with them.