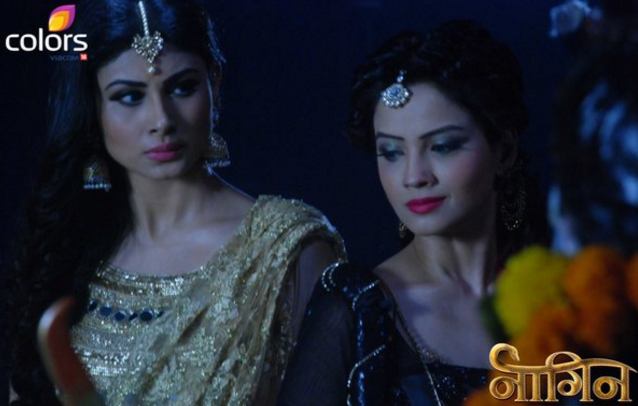 Sesha and Shivangi have a fight. Both the Naagins fight and get anger out. Before Shivangi could secure herself, she was attacked by Sesha. Sesha is much angry and is determined to kill Shivangi. Shivangi lacks expertise and gets bitten by Sesha.

Shivangi escapes by the wall and runs to the temple. Rudra was present at the temple. Shivangi has poison in her. She reaches Rudra and falls in his arms. The Guru tells Rudra that just Rudra can save Shivangi as Rudra is a very powerful Naag. Rudra tries to get Shivangi’s poison in him. Rudra prays to Shiv and takes Naag avatar. The enemies are increasing in number. Rudra and Shivangi are managing by helping out each other. Rudra saves Shivangi’s life.

Later, Rudra takes the blame on himself that he has married Alia for money. Alia’s heart breaks. Rudra accepts the blame so that Rocky and Shivangi do not get separated. Alia scolds Rudra and is angry on him. Alia says I trusted you and saw love in your eyes for me, and asks him to deny all this. Yamini scolds Rudra and asks him to leave from the house. Shivangi sees all this silently and does not react. Rocky says Rudra is big fraud, who married Alia for money and fooled all of them. Rocky and Yamini ask Rudra to leave from the house before they call police. Rudra has gone out of Yamini’s house.