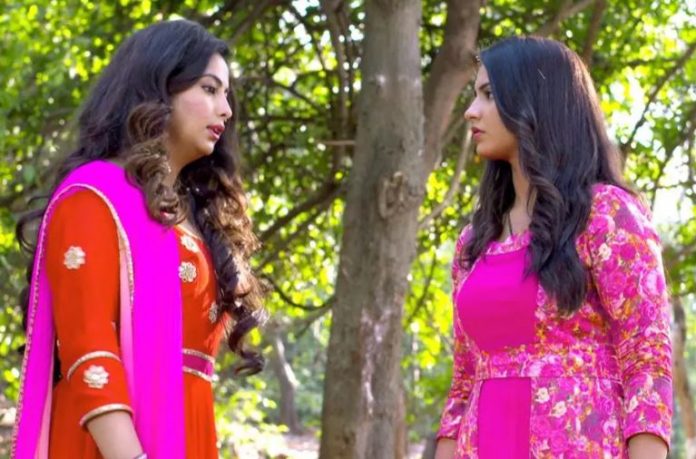 Chakor and Imli’s election campaign goes on. Suraj supports Chakor in her campaign. Imli then asks Suraj to destroy Chakor’s campaign. Suraj obeys Imli’s command. He tears the posters. Chakor doesn’t feel bad. She wants Suraj to stay protected by Imli and Ranvijay’s tortures. Chakor falls down the ladder. Suraj runs to save her. They have a moment of romance. Chakor challenges Imli and asks her to get ready for the defeat.

Chakor finds the goons kidnapping Amma ji in an ambulance. She tries to help Amma ji. She asks the goons where are they taking the lady. The goons ask her not to interfere and push her away. Chakor doesn’t lose courage to fight with them. Chakor finds Anushka. Anushka asks about Amma ji. Chakor tells her about the goons taking Amma ji somewhere. Police stops them. Chakor asks inspector to let them go, they are in hurry. Inspector promises to help them. Anushka scolds him for wasting her time and stopping them on Rantej’s order.

Chakor and Anushka try to save Amma ji. Anushka sheds tears. She digs the land to find Amma ji. Chakor asks her to calm down. She tells Anushka that Amma ji is not in the jungle, they have to find Amma ji somewhere else. Anushka gets Amma ji’s clothes and shows to Chakor. They dig the soil to find Amma ji, who is buried alive by Rantej’s goons.