Jiji Maa: Uttara tries to keep Suyash away from Falguni, so that her plan doesn’t get any hindrance. Suyash tells Falguni that he will always be with her. He leaves to meet Uttara. Vidhaan and Niyati buy some toys for their would be baby from the vendor. They get happy to shop for the baby. Uttara plots to kill Falguni and comes up with a great idea. Falguni goes for a balloon ride. Niyati joins her in the last minute. Falguni and Niyati have a ride and enjoy. They aren’t aware of the bomb planted in the balloon by Uttara and Dilip. Falguni and Niyati then realize that their lives are in danger, since the hot air balloon isn’t in control. The balloon soon blasts off by the bomb, which makes the girls trip down the balloon floor.

Kanhaiya requests Daali to make tea for Janki. Daali agrees to make tea when Kanhaiya makes her emotional. She gets her hand burnt by the hot pan. She doesn’t know how to treat a burn. Kanhaiya helps her out and eases her pain by using cold water. Daali realizes that Kanhaiya really cares for her a lot. Janki gets suspicious of Kanhaiya and Daali’s relationship’s truth. Janki spies on them and finds them in a cute situation. He likes the fact that Kanhaiya is teaching real living to Daali. Kanhaiya always helps Daali. Janki is sure that Kanhaiya will be proved worthy of Daali. Daali then faces a problem when her clothes get stolen from the bathroom. Kanhaiya reaches her to rescue again. Janki wishes Daali accepts Kanhaiya as her life partner, by all her heart. He thinks of some ways to make Daali realize Kanhaiya’s worth, despite their status difference. He wants to unite Daali and Kanhaiya.

Rahul tells Gauri that they have to leave for Kashi to stop Indra from getting the Shivlings. He asks Swami ji and Gauri to accompany him. Shakti finds the Shivlings with Namrata. She thinks Namrata has the Shivlings, which the entire village is finding. She hides Namrata from Thakur and Lakhan. Thakur meets Shakti and confronts her for backstabbing him. Shakti and Thakur’s enmity goes on. Shakti tells him that she wants to kill him and fulfill the revenge. She doesn’t acknowledge his goodness. Thakur holds his anger and tells her that he has a big duty to take the Shivlings back to his village, else he would have sorted their problems long ago. Shakti wants him to work hard and find Shivlings.

Shivay is left with no option than to go ahead for the remarriage. He wants to talk to Anika. He isn’t aware that Anika is around. He senses Anika close and looks for her. Roop separates them. Rudra disguises himself as a pandit to fail Roop’s plotting and save Shivay. Roop limits Anika from going out. She asks her to sit back and watch Shivay’s remarriage. She invites Tej and Jhanvi. Pinky tries to take help from Tej. Roop suspects them. She asks them to just enjoy the marriage ceremony and bless the newly weds. Roop is happy that they are getting trapped in her plans. Pinky helps Omkara and Rudra in stopping Shivay’s remarriage. Omkara assures her that Shivika’s union can’t be ruined.

Adi meets Roshni at night and tells her about his growing problems with Aaliya. He misunderstands Aaliya and her efforts. He tells Roshni that Aaliya wants him to depend on her. He wants to prove anyone that he is better. Roshni comforts him by boosting his confidence. She shows belief in him and offers him help. Adi gets glad to have her with him. Aaliya tells the family that Adi is busy in office. She hides about her fights. She shows her belief in Adi. She tells them that she trusts Adi and his love, he can never do anything wrong. Raman asks Aaliya to always trust Adi. He is proud that Ishita also trusts him. Ishita doesn’t want to think wrong about Raman. She limits her thinking for the betterment of the family.

Avni imagines Neil reaching her and making a love confession. Avni’s heart melts and she accepts his love. Avni tells him that its difficult for her to live away from him. She too confesses love for him. Neil and Avni have an emotional union. She soon realizes that she is just yearning for Neil. She finds Neil and Mitali at the jewelry store, when she goes to sell her bracelet. She hides from Neil. Neil buys engagement rings. Neil learns Avni has sold her bracelet which he gifted her. He buys the bracelet back. He doesn’t want to lose such memories. Avni returns home. Neil meets her and returns her the bracelet which she tried to sell off.

Manish thanks Naira and Kartik for understanding Aryan’s love and also respecting his feelings. He praises Naira for exposing Suhana. Aryan realizes his mistake. Manish makes Aryan and Suwarna know their fault for blindly believing someone. Aryan gets heartbroken and loses belief in love. He leaves from the house to stay alone for some time. Naira gets Savita, Suhana and Rahul arrested. She takes away all the jewelry back from them. Naira solves the mess. Suhana makes a leave from Goenka house. Suwarna apologizes to Manish. She feels bad for Aryan who lost his first love. Manish isn’t annoyed with Suwarna. He knows she did this to support her son and gain his love. Kartik and Naira ask Suwarna to be happy that they got saved from Suhana, as the marriage didn’t happen. Suwarna fears for Aryan’s sorrow. 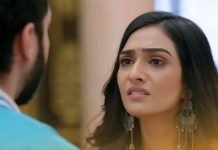 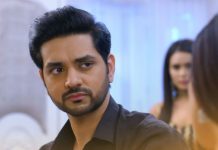 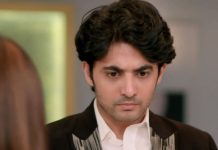