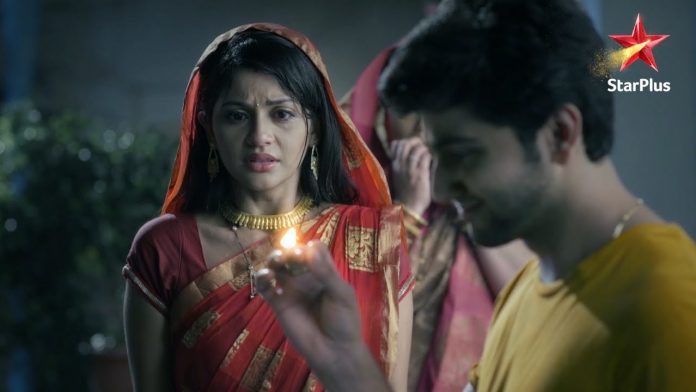 Radhe and Krishna get overjoyed after winning the bike in the competition. They return home before Shukla could figure out their outing. However, Bela understands that Krishna made Radhe take the disguise and trick the family, as she intended to participate in the competition. She exposes Krishna’s move in front of the family and tells them how Radhe supported his wife, by lying to them.

Shukla asks Bela if she has any proof to confirm her word. Bela produces the evidence against Radhe and gets him caught in no time. Shukla realizes that Krishna and Radhe participated in the competition and questions them if they is true. Krishna tells him that she has participated just to get a bike for Radhe. Shukla loses his cool knowing about the bike. He angrily pours kerosene on Krishna and the bike, asking Radhe to burn either of them.

Radhe saves Krishna and burns his bike, his dreams once again. the family gets moved by Shukla’s anger. Radhe sacrifices his dreams on his father’s command. Shukla wants everyone in his house to live life on his terms. He asks Krishna to remember her limits next time and think a hundred times before risking his reputation. He vents out anger on Krishna for upsetting the minister and losing the big contract. Shukla’s behavior gets unacceptable for Krishna, who nearly faced death. She decides to put an end to the madness of Radhe’s family and make a leave from Radhe’s life.