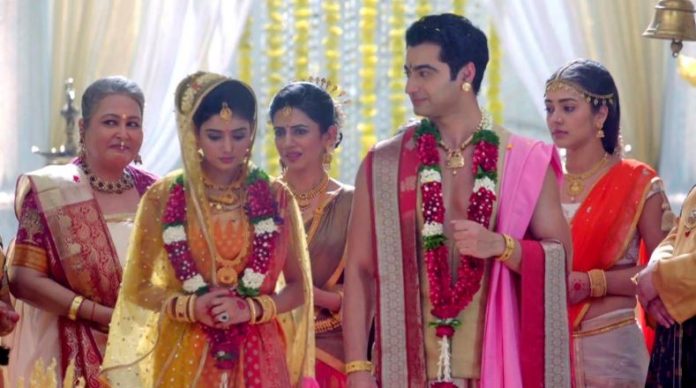 Angad shows up Haran to Pranali. Haran struggles in the cold captivity. Angad tells Pranali that his motive is to enjoy Haran’s killing in front of her. Pranali asks Angad not to kill Haran. Angad misunderstands her and thinks she has feelings for Haran. He angrily takes her away. Pranali informs Shil Aditya that Haran is captive and his life is in danger. Shil Aditya decides to find Haran before Angad kills him. Pranali tells him that she remembers the route by which Angad took her to the secret cave. She follows her heart and the route marks to reach the cave. Pranali gets a huge shock on seeing Haran facing death.

Angad then sees Pranali saving Haran and meeting him. Angad hides and overhears their conversation. Pranali tells Haran that she loves Angad and wants to keep her marriage, even if he is a demon. Haran respects her decision. Angad gets in a dilemma and realizes Pranali really loves him. He then spares Haran’s life and asks him to get away from their lives for once and all. Angad asks Pranali if she would become a Daanav Vanshi too and reign as a queen. Pranali gets a big shock. Angad asks Pranali to live with him if she wants, but on his conditions. Shil Aditya fears that Maling will lose its queen. What will be Pranali’s reply to Angad? Keep reading.