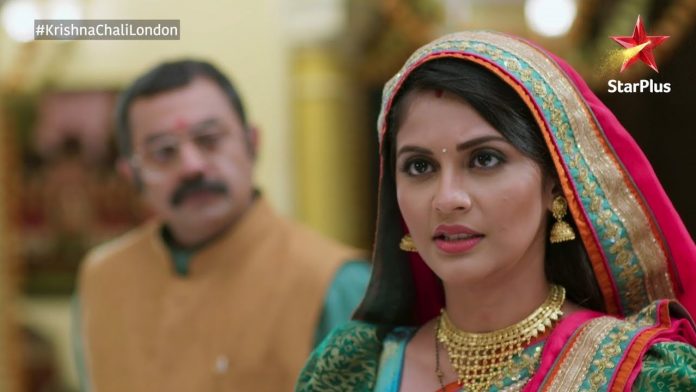 Krishna reaches the police station to meet her dad. She learns that Dubey is much beaten up in the lockup. She cries and tries to meet him once. Dubey hides his bad state from Krishna. He feels shattered. He asks Krishna to leave since she can’t tolerate his wounds. She can’t believe that Dubey was tortured so much. Her patience gives up. She vents out her anger on the inspector. She asks the inspector how could he torture her dad. She demands to know Dubey’s crime that they are treating him so badly.

The inspector tells Krishna that Dubey is a fraud doctor. She tells him that he is a registered medical practitioner. Inspector talks to her rudely and asks her to leave since he can’t help him, he acted on the complaint made on Dubey’s fraud. Krishna demands to know who made the complaint against Dubey. Inspector doesn’t reveal anything to Krishna.

Constable asks her to meet the higher authorities since the complaint came from them. He suggests Krishna to meet the health minister, who can help her in the case. Radhe comes home and asks Shukla to help Radhe. He gets a huge shock on learning that Shukla has trapped Dubey. Shukla tells Radhe that he won’t help Dubey, who is paying for his sins. Radhe begs him to give money for the bail. Shukla doesn’t agree to help Dubey. Radhe feels terrible when he fails to get help from his brothers.

Still, Gajanand helps Radhe a bit. Radhe thanks Gajanan for the help. Krishna determines to go to Lucknow and meet the minister to get help for Dubey. Bua accompanies Krishna. While they meet the minister, they learn a shocking truth about Shukla’s misdeed to trouble Dubey and frame him in the fraud case. Krishna witnesses Shukla rejoicing over Dubey’s sufferings. She gets much heartbroken.

Krishna can’t believe that Dubey and Bua got her married in such an insensitive and cruel family. She regrets for Dubey’s mistake. She tries to beg Shukla to get her dad released. Shukla serves his ego further. Will Radhe take a stand for Krishna? Keep reading.