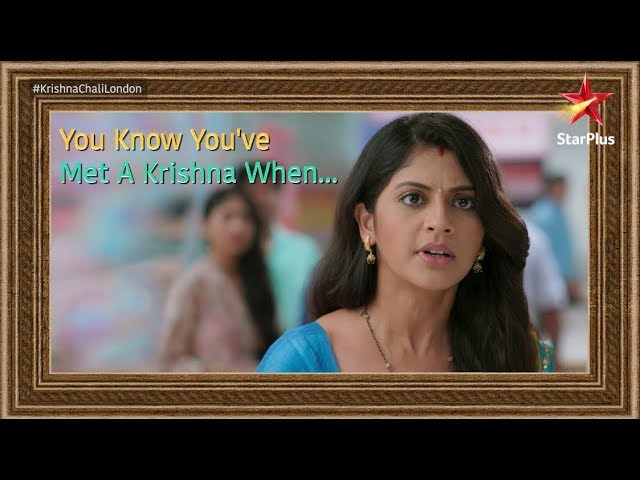 Radhe gets sidelined by Prashant’s coming. Radhe asks Dubey and Bua to return the money to Prashant and send him away. Dubey tells him that Prashant is not a stranger. Radhe tells Dubey that he has got the money and kept his promise made to Krishna, why do they need to take money from someone else. Dubey asks Radhe to let him decide few things. Bua tells Radhe that Shukla can get Dubey arrested again by any theft blame if they take the money from him. Shukla gets angry and summons Radhe and Krishna. Krishna gets upset again because of him. She becomes Shukla’s puppet. She agrees to leave Dubey in that state and go with Radhe.

She doesn’t want Shukla to vent anger on his wife. Prashant learns Krishna is leaving with Radhe and stops her. He asks her to stay with Dubey. She tells him that she has to leave as its really important. She thanks him for all the help. Krishna asks Bua to take care of Dubey. Bua asks Krishna to stay back with them for few days.

She gets disappointed with Shukla’s move. Krishna feels sad and doesn’t change her decision, knowing Shukla’s madness. She asks Dubey to take care of himself. Dubey gets upset as he has ruined Krishna’s life by opposing her decision. Krishna doesn’t want any interference of Prashant in her life. She wants to support Radhe, after seeing his efforts.

Shukla asks his wife to call Radhe and Krishna home before the day ends. His wife worries. She gets a word from Krishna, that they are coming home in some time. She doesn’t know what’s Shukla up to. Radhe stays disturbed because of Prashant. He doesn’t get his answers from Krishna. He doesn’t get any courage to ask her about his relation with Prashant. Krishna deals with her dilemmas over her past and present. She doesn’t want to hurt Radhe by any way. Radhe doesn’t misunderstand her, but wonders if she is hiding anything. Radhe also fears Shukla, who is raging at home.

On returning home, everyone gets worried seeing Radhe’s wounds. Radhe reveals that he has fought with a wrestler to get money for Dubey’s bail. He tells Shukla that he has taken his challenge and earned the money. Shukla scolds him and asks him if he knows about Prashant, who has bailed out Dubey and helped Krishna. He asks Krishna to tell Radhe who is she related to Prashant. Krishna gets speechless. Shukla tells Radhe that Prashant is Krishna’s ex boyfriend. Radhe gets a huge shock and shatters with this unexpected truth. Shukla wants to ruin Krishna’s happiness. Radhe questions Krishna if she still loves Prashant. Krishna tells him that she doesn’t love Prashant now. Radhe gets new hopes and takes a stand for her.