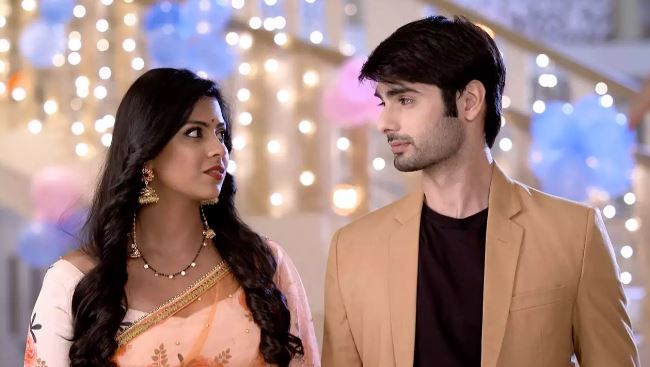 Savitri Devi: Sanchi and Veer get together to tackle Naintara… Sanchi gets helpless because of Naintara. She wishes she could explain Veer about Naintara and prove her point that Naintara is after Anand and his family. She meets the noble saint who is helping her deal with Naintara. She tells him that Naintara is planning to target Veer next. Sanchi can’t afford to lose Veer. She asks the saint to give her any solution to save Veer, she can do any tough task for his life.

Saint asks her to be sure of her decision, since the rituals are too tough and she can lose her life as well. He asks her to sit inside the fire ring and give up her life if she wants to defeat Naintara. Sanchi gets ready to burn her life, if she can save everyone else. She tells him that she would like to meet Veer for the final time. Sanchi meets Veer and gives him a surprise. Sanchi enjoys her last dinner with Veer and gets upset.

Anand and Veer visit the hospital. Naintara hypnotizes Anand and commands him to kill Veer. Anand attacks Veer. Veer gets a huge shock when Anand tries to stab him. Veer defends the attacks. They both have a fight. Naintara wants to take revenge from Anand. She wants Anand to kill Veer, so that Anand gets punished for his crimes. Anand is possessed and doesn’t get stopped by anyone. Naintara creates hurdles for Sanchi and doesn’t let Sanchi find actual Veer and Anand. Sanchi falls in illusion and sees them everywhere in the hospital. Sanchi worries seeing them. She fails to do anything. She is helpless because of Naintara. Sanchi stops Anand and Veer from the fight. She takes help from a saint to put an end to Naintara’s evil. She learns that Veer has got aware of Naintara. Veer supports Sanchi is tackling Naintara.