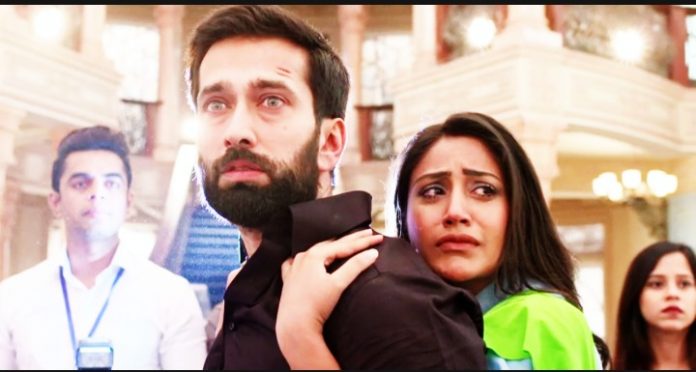 Ishqbaaz YHM: Karwachauth celebrations with huge twists In Ishqbaaz, Anika awaits Shivay. The Obahus take a rocking avatar. They want to impress their husbands. Shivay hands over divorce papers to Anika. Anika is in much tension. She decides to leave the house. Gauri and Bhavya don’t want Shivay and Anika to get separated. They stop Anika from leaving. They ask Anika not to leave her rights on Shivay like this. They insist Anika to stay back. Anika doesn’t feel like fulfilling the rituals without Shivay. Omkara and Rudra gift jewelry to Gauri and Bhavya on Karwachauth. They have fun in the celebrations.

Rather, Anika feels she doesn’t belong to Oberoi family. Shivay doesn’t want to keep relation with her. Anika doesn’t lose hopes. Priyanka and Roop don’t care for Anika’s leaving. Similar thing goes for Rudra. Anika gets crying with the thought that she will be losing her Shivay. Shivay stays indifferent and hurts her by the insulting speech. He also tells Anika that he is feeling suffocated in their relationship. He asks Anika to go away if she really cares for his happiness.

Gauri and Bhavya stand by Anika. Anika has understood by Shivay’s drama. She is frustrated when Shivay pretends unconcerned. She tells him that if he doesn’t believe in Karwachauth, she will leave from his life. She doesn’t want to force the relation on Shivay. Anika didn’t expect him to change so much so soon. She feels Shivay is intentionally doing this. But, she wants to obey him for the sake of his happiness. He controls his fears and pains. He stops himself from reflecting outside by much difficulty.

Omkara tries to make Shivay realize his mistake. He asks Shivay not to lose a gem like Anika. Likewise, Gauri apologizes to Shivay for blaming him for Anika’s accident and pushing him into guilt. Gauri tells Shivay that she was worried for Anika and didn’t think before accusing him. Oberois stop Anika from leaving the house. Anika agrees to stay back till Karwachauth celebrations get over. Shivay gets a surprise for the family. Shivay’s gift will be shocking for Anika and everyone.

Ishita and Raman have much love in their relation. The annoyances make them a bit away. Ishita makes it certain that Raman doesn’t get away on the eve of Karwachauth. She tells Raman that they have to be together. She also wants to present a good example to Rohan and Aaliya, who idolize them. Moreover, Shagun-Mani, Rohan-Aaliya, Romi-Mihika and Ruhi-Karan celebrate Karwachauth. The women keep the fasts for their life partners. They make prayers for the long life of their husbands.

Ishita performs Karwachauth puja by sighting the moon. Raman breaks Ishita’s fast. He also feeds her water and sweets. Everyone is happy to celebrate Karwachauth. Also, Ishita expresses love for Raman once again. Rohan and Aaliya have cute moments. Shagun and Mani bless Aaliya. Meanwhile, Karan confesses love to Ruhi. Karan brings in some surprises for her. The love stories of two young couples will be adding interesting twists.