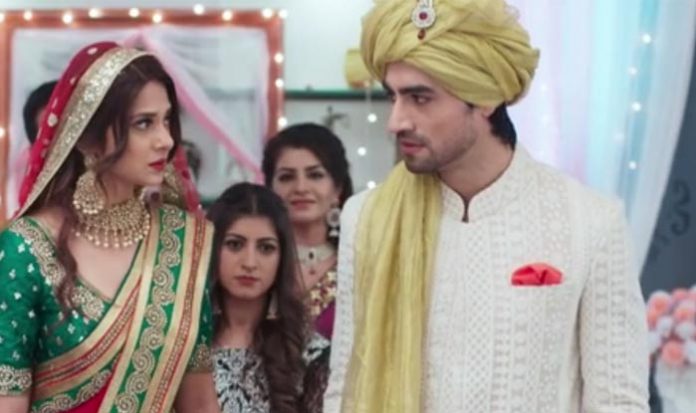 Bepannaah to go off-air; Farewell to Aditya-Zoya… Zoya and Aditya’s life has changed after the leap. Rajveer has taken over all the business and property of Hooda family. Zoya and Aditya have a hit and miss. Aditya meets with a minor accident, while he is lost in Zoya’s memories. Aditya loves Zoya a lot and can’t hear a word against her. Zoya is around Aditya. She saves Anjana from trouble. She pulls Anjana back, when Anjana was going to get hit by the truck. Aditya gets worried for Anjana knowing she went somewhere from the hospital. Later, he finds her and gets relieved. Zoya flees on seeing Aditya. He asks Anjana about the girl who saved her. Anjana doesn’t mention Zoya. Aditya rushes her back to the hospital. Doctor asks him to go home and rest.

Aditya refuses and tells that he will stay in the hospital. He says where there is my mum, there is my home. He lies down on the chair to rest and covers himself with a dupatta. Zoya comes there and takes the dupatta from his face.

Aditya and Zoya’s love saga comes to an end

She walks away from him. Aditya gets up and looks at her. Zoya to return to Aditya’s life again. Zoya will be seen becoming part of Aditya’s life again. Zoya looks after Anjana and helps her recover. This will make Aditya realize his mistakes and apologize to Zoya. Aditya will realize Zoya’s true love. Zoya and Aditya will be re-uniting soon in the show’s climax scene.

Roop and Ishika dance in the masquerade party. Roop compliments Ishika on her looks in the party dress. Ishika tells him that she has to wear this dress because of him. Roop says you are looking stunning. Ishika says no need to praise her falsely and blames him for the accident. Roop asks why is she blaming him for the accident. Ishika says I lost my clothes bag because of you. Ranvir looks for Ishika in the party and thinks he will find her even if she hides her face. He plans to make Ishika lose her mental balance in front of Roop.

Rupa informs Ash about Aadhya telling Jai about her act. Ash acts in front of Jai and pretends as if she is much hurt. Jai gets upset with Aadhya and thinks she lied to him about Ash. He feels Ash is genuinely having a leg fracture. Aadhya tells Savvy that Jai got upset with her and left. Savvy asks why she is affected by his behavior.

Aadhya says Jai is her friend and she cares for him. Savvy says Jai is Ash’s friend too and makes Aadhya realize her love for Jai. She says you fell in love with Jai, now he is not only your friend but has become your love. Aadhya is surprised and realizes her feelings for Jai. Jai finds Aadhya’s behavior strange. Rajat and Vihaan tell him that Aadhya loves him and is possessive about him. Jai wonders if he really loves Aadhya and if she loves him too.