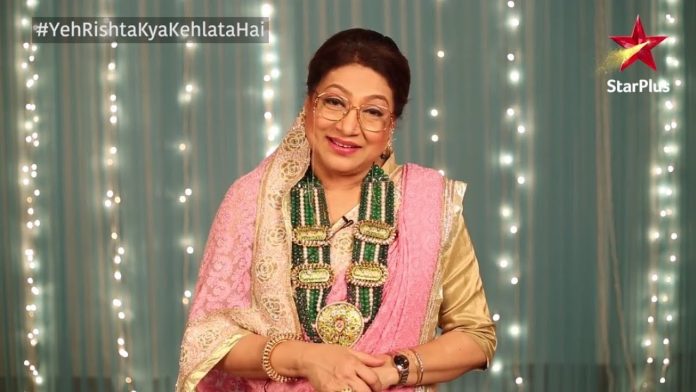 Yeh Rishta Suhasini shocks Naira. Naira plays a trick to trap Purushottam. Ila wants her misunderstanding to end. The families want to play the interesting game. Kartik and Naira explain the game rules to everyone. Naira gets angry seeing Purushottam’s evil ways. She warns him and tells him to control himself before it gets too late. The families want Naira to sing and dance in the celebrations. Samarth and Gayu get their mehendi applied between all the fun. Naira brings a twist in the tale. She tells them that this time they will dance on medley songs. Naira gets an idea and messages Purushottam from Mansi’s phone. She wants to threaten him, so that he makes a mistake in fear.

Purushottam calls Mansi and asks her why does she want to tell the old incident to everyone. He warns Mansi and challenges her courage. He tells her that her in-laws will blame her if she tells the truth. He asks her to better keep quiet. Naira learns his evil truth and cries for Mansi’s pain. She wants to talk to Mansi and help her. Mansi arrives with Anmol. Naira shares Mansi’s pain. She tells Mansi that she got to know everything. She doesn’t want to spare Purushottam. She asks Mansi to tell the truth to Kartik.

Mansi refuses to take any step, being afraid. Naira wants Purushottam to get punished. She says you should never conceal such things. Suhasini Dadi intervenes between them and tries to control Naira. She doesn’t want Naira to expose Purushottam.

She makes a shocking revelation that she knows her brother’s heinous act and still covered it up for the sake of family peace. She states that maybe Mansi was wrong, being immature in that age. Naira tells Dadi that she should have trusted Mansi. Dadi tells Naira that Purushottam helped them a lot, she can’t question him about the past. Naira determines to expose his truth. Dadi orders Naira not to put the relations and reputation on stake. She wants Naira to stay silent.

Dadi tells Naira that she will not let Kartik know this matter. Naira gets much disheartened that Dadi wants to hide the matter. She vows to expose Purushottam’s truth at any cost. Dadi warns Naira against taking any extreme step. Naira wants to talk to Kartik first. Dadi begs Naira to save her family. Naira doesn’t melt her heart. She asks Dadi not to stop her, since she will just do the right. Naira doesn’t want Dadi to save her brother. Dadi tells her that Mansi’s marriage will break if this truth comes out, Rukmani won’t let Mansi live in peace. Naira asks Dadi not to have any such fears. She wants to stop Purushottam. Dadi asks her to keep her family’s secret and end the matter right here.