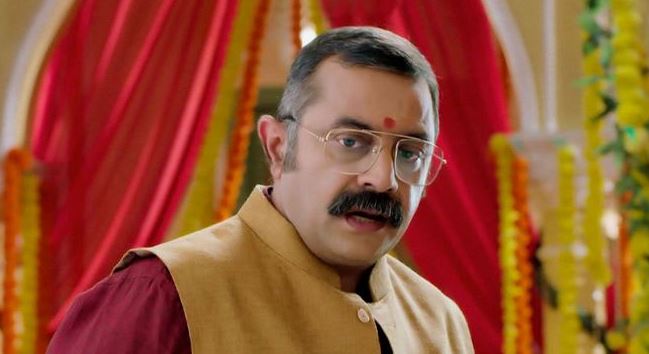 Krishna Chali London Huge drama Radhe is actually Mohan, an imposter. He meets his friend and celebrates his good life. He is enjoying taking Radhe’s place in Shukla family. He wants to marry Krishna soon. Nayani calls up Veer and asks him to talk to Sunaina once, who is behaving strange. Veer tells her that he will come home in some time and talk to Sunaina. Veer and Krishna want to expose Radhe’s truth and collect evidences against him. Sunaina learns from Mohan that he is at the same place where Veer has gone. She alerts Mohan to leave from the market and not come in Veer’s sight. She asks Mohan not to make any mistake and just get back to Shukla house. Mohan learns about Veer who is in disguise.

Veer and Krishna’s dramatic disguise fails. Mohan and his friend attack Veer and snatch the phone to destroy the video recording. Veer faints down after the attack. Krishna manages to take Veer for aid. Mohan flees from there. He thanks his friend for the help. He gets into new trouble when he finds Shukla watching his crime. Shukla learns that Radhe isn’t his son but an imposter. He realizes that Radhe is Mohan, and Veer was telling the truth. He beats up Mohan. He calls up Gajanan to tell Mohan’s truth.

Shukla doesn’t succeed to tell anything to his family. Mohan finds a chance to stop Shukla. He pushes Shukla in front of the speeding vehicle. Shukla meets with an accident. Shukla falls on the road. Mohan thinks he has got rid of Shukla too. He runs to Shukla’s house to get into his drama again. Veer gets conscious and checks his phone. He doesn’t find the evidence in it. Krishna tells him that they should go to hospital first. Krishna worries for Veer.

Gajanan learns about Shukla’s accident and rushes to him. Gajanan gets Shukla to the hospital and gets him treated. He pleads to Veer to operate Shukla. Krishna asks Veer not to make any mistake in performing the surgery after a long time. Veer gets the big responsibility of operating Shukla. Krishna and Veer want to save Shukla so that Mohan’s truth comes out.