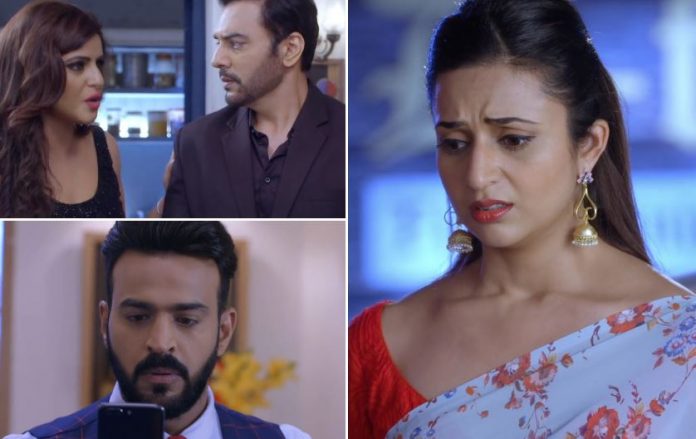 Yeh Hai Mohabbatein High drama strikes Raman Raman is worried that he is playing with Natasha’s emotions. He feels he is also being exploited this way. He doesn’t want to cheat Natasha. He wants to know her motives by becoming Shardul. He doesn’t trust Natasha. He thinks she can cross boundaries, assuming him to be her husband. He doesn’t want to invite such troubles. Raman tells Ishita that Natasha has called him home at odd hours, and maybe she is planning something. He asks Ishita to cancel the plans. Ishita tells him that she will accompany him to fail Natasha. He agrees on her assurance. Natasha tells her brother that she will find out Raman’s truth, since she knows Shardul very well.

She tells Sunil that Shardul was very innocent and he can come in their words easily. She knows that Raman will be manipulating and playing games with her. She tells Sunil that she had made the plan to catch his real truth. Simmi and Ishita ask Raman to take Natasha on the date, so that Natasha doesn’t try anything weird. Raman feels secure hearing their plan. Natasha gets more cunning. She gets prepared to meet Raman.

On the other side, Ruhi and Karan wonder why did the doctor not meet them. Karan tells her that Sudha can help him in gathering information about the doctor. Yug tells Aaliya that someone is surely tricking them by cutting down all the sources of information by which they can learn about Natasha. He tells them that they have to find their hidden enemy, who is helping Natasha. Karan makes a plan to nab their enemy. He calls up Sudha to seek her help. Arijit meets them and asks for Raman and Ishita. He finds them hiding something again.

He informs Natasha that they are up to something and she needs to stay careful. Arijit catches their lies and spies on them to know Karan’s plans. He wants to fail Karan’s plans. Sudha informs Karan that she couldn’t find about the doctor. Arijit wants to stop Karan from meeting the doctor. Meanwhile, Raman meets Natasha. She gives him a warm welcome. She tries to get romantic with him. Raman tells her that he wants to take her on a dinner date. He tells her a convincing story of his partial amnesia. He tries hard to explain that he is Shardul, not Raman. She knows that Shardul isn’t greedy for money.

She understands his lies. She gets certain that he is Raman. She doesn’t care for his identity and just wants him with her, so that she can use his face to unlock the diamond safe. Raman asks Natasha to get ready for dinner. Natasha makes plans to cancel the date. Raman informs Ishita that he is leaving from the house. Ishita and Simmi reach the restaurant to keep an eye on them. Natasha acts of a foot sprain and goes back home with Raman. She clicks Raman and her pictures to prove that Raman is Shardul. She wants to break Raman and Ishita’s relation, which gives happiness to Arijit.