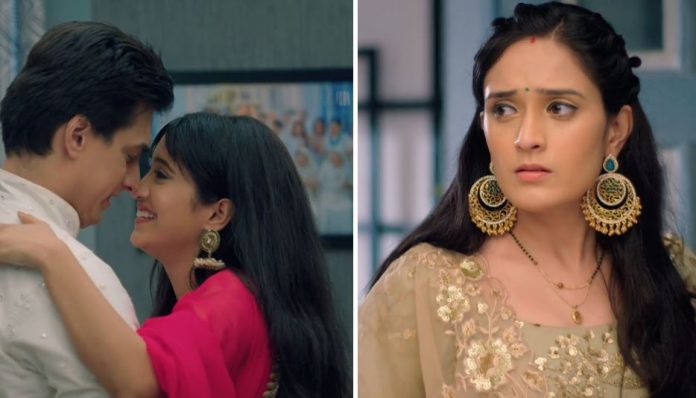 Yeh Rishta Suspicion twist over happy in love Kartik Naira Kartik and Naira couldn’t freely talk at home when the matter is about Akhilesh. They have a phone chat to discuss about the way they would proceed in Akhilesh and Lisa’s matter. Kartik asks her if she has thought of something in this regard. She doesn’t understand what step to take, since getting justice for Lisa will ruin Goenka family peace. She is afraid that Surekha will be heartbroken. Even Kartik is much tensed that Surekha won’t be able to handle this shock. He tells Naira that he is even worried about Luv and Kush, who have already distanced themselves from the family. He tells Naira that they should better plan things beforehand.

She recalls the times when Akhilesh and Surekha were also a loving couple. She misses the old times. Kartik and Naira’s chat gets known to Vedika, who gets helpless watching Kartik’s distraction. She wants Kartik to pay her attention. She wishes that he forgets Naira and moves on. Vedika gets angered when she gets mistaken reading Naira’s message to Kartik. She wants to confront Naira for wishing to return to Kartik’s life. Kartik doesn’t give time to Vedika, since he is occupied in this stress.

Naira fears that Lisa can take any wrong step, like suicide. She doesn’t want Lisa to harm herself. Kartik wants Naira to console Lisa and give her hope. He wants to fix everything in a way that justice happens with Lisa and Surekha too. Vedika tells him that he can share the matter with him. Even on his insistence, he doesn’t reveal Akhilesh’s matter. His silence makes Vedika angry. Vedika asks him to accompany her to the shop to get Ganpati idol home. Kartik tells Naira that he is going to get Ganpati. Naira recalls past when Kartik and she used to make the Ganpati idol and celebrate. Naira finds the kids arguing to become Ganpati.

She solves their fight by making them Ganpati’s Vaahan Moushak. She tells them that they both can become Moushak. She tells them that they shouldn’t fight for Kartik, since he belongs to both of them. The kids dance to welcome Ganpati. Kartik and Vedika get Ganpati inside the house to place it with love. Vedika gets the Jhanki well decorated. The pandit praises the Jhanki at first, which makes Vedika first. He then sings praises of Naira, for turning the cute kids into Moushaks. He tells Naira that this is something unique which he didn’t see ever.

The entire family gets praising Naira for her smartness. Kairav tells them that Naira always celebrates festivals by making the idols self at home. He doesn’t like Vedika’s idea to shop for the idol when they can make it themselves at home. He insists Naira to make a Ganpati idol, like she used to make in Goa. The entire family want Kairav smiling and happy. They ask Naira to make the idol for Kairav if that will give him happiness. Naira proves her talent once again by making an idol out of clay in minutes. Kairav asks Naira to play the idol and perform the puja with Kartik. He gets on insisting and brings her together with Naira.