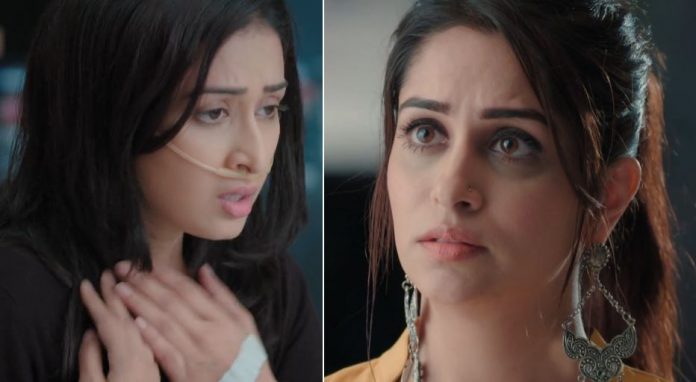 Hotstar Prime Kahaan Tum Raima unexpected exit Rohit and Sonakshi spend time to discuss the past and clear the misunderstandings. Sonakshi wants to tell him about that dark night. He tells her that Raima was his life before, but now Sonakshi is his life and love. He tells her that he believes her, he has seen her nature closely and knows that she can’t leave anyone dying like that. He tells that Raima would have not lied to him, but maybe that’s a misunderstanding in her mind. He can’t clear Raima’s misunderstanding right now, since she is in a weak state. He tells Sonakshi that he loves her and only belongs to her.

He tells that she is very simple and good-hearted that she helps even strangers and animals. He tells that he doesn’t want to know his past. He just wants time to break the truth to Raima about their relationship. He tells her that he lied to Raima that he loves Raima only so that Raima doesn’t get into any trauma. Sonakshi tells him that she was too scared to lose him. He tells her that he will just love her and never leave her. She tells him that she is okay with his lie to Raima, since she also wants Raima to recover.

On the other hand, Raima is still living in the bubble that Rohit loves her. She tries to get bonding with Veena and family. Veena knows Rohit has moved on with Sonakshi and its no use to give hopes to Raima. She asks Raima to focus on her recovery. Sonakshi reveals the past incident to Rohit. She tells him how she had reached the farmhouse on Raima’s call and found her injured. She tells that Karan forced her to not help Raima and turned her unconscious.

She reveals that Karan warned her against going back to the farmhouse or the police. Karan had threatened Suman and Sonakshi. Sonakshi tells Rohit that she had tried her best to help Raima, but since she reached there, she missed Raima. She shares the sorrow of broken engagement with Karan. She feels she got saved from a wrong man. She tells that Raima was taken to the hospital and then Suman didn’t let her file the formal complaint against Karan for the incident. She feels helpless and guilty that she didn’t help Raima that time. She tells him that she wants to apologize to Raima once.

He tells her that they will talk to Raima together. He assures that Raima is just her past. Sulochana brainwashes Raima against Sonakshi. She tells Raima about Rohit’s love affair with Sonakshi. Raima gets unstable on realizing Rohit’s lie. She leaves the house in a panicking state. She shatters thinking she has lost Rohit to Sonakshi. Rohit learns that Raima is missing. He tries hard to find Raima. Raima meets Sumit again and shares her sorrow of a broken relationship with Rohit. Will Raima and Sumit plot against Sonakshi? Keep reading.