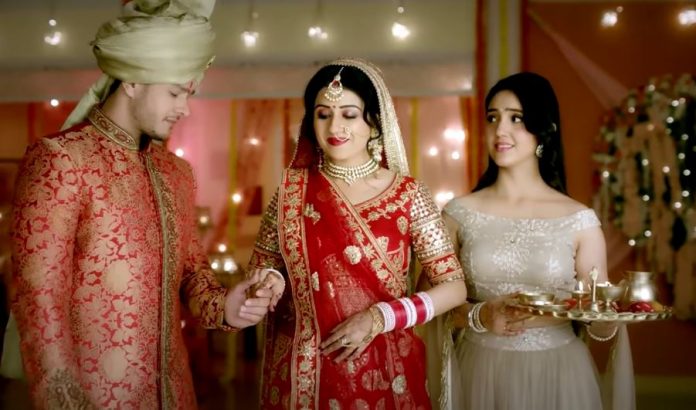 Patialaa Babes Rishtey Pyaar Ke Sufiyana Triple Twists Meenakshi is furious to know about Abir and Mishti’s relation getting fixed by Mehul. Abir tells that Mehul knew about his love story and took the initiative to get him married. Meenakshi feels Mehul has done wrong to go without informing her. She tells Abir that he should have informed the family at least. She asks if they don’t matter to him. Abir and Mehul’s upsetting move creates troubles in the family. Abir tells her that it was a surprise for him as well. Meenakshi doesn’t know how to react on this news. The family gets annoyed with Mehul.

Meenakshi knows Mehul is triggering Abir against the family. She confronts Mehul for his cheap tricks. Mehul tells Abir that Meenakshi and entire family aren’t happy for his alliance. Abir asks Meenakshi to accept Mishti for his sake. Meenakshi disapproves Abir’s request. Abir gets stunned when the entire family gets against. Kunal promises Meenakshi that he will not let Mishti come into their house. He threatens Abir that if Abir marries Mishti, then he will be divorcing Kuhu. This shocks Abir.

Madhav brings Saltanat home. She gets emotional on meeting everyone. She has got her memories back. She is thankful that she has united with her family because of Madhav. She feels indebted to Madhav for saving her life, since she was buried into the grave by her family, who assumed her dead. She is finally back in her house. She hugs her parents, Nadim and Rubina. She forgives Zainab for hiding Kainat’s truth for long. She sympathizes with Zainab. Saltanat is married to Zaroon. She hopes to get her married life back on track. Krish is much attached to Saltanat. He wants to be with Saltanat and Zaroon. Madhav can’t part ways with his son. He explains Krish that Saltanat needs to stay with his family. Krish is happy for Saltanat and Zaroon’s love story completion.

Patiala Babes:
Babita feels blessed to get a life partner like Hanuman. She gets blushing when she is asked about her bond with Hanuman. Babita and Hanuman are happy in their marriage. Hanumat loves her a lot. She is getting much love from him, which brings a stability in her life. Babita tells that she is very happy and enjoying her life’s new phase. She didn’t imagine to get a loving husband like Hanuman. She realizes his love and experiences good feelings. She prepares the dinner for Hanuman’s guests. She wants to keep his prestige. She wants to evolve in her happy world with Hanuman. She doesn’t want anyone else in her world. She wants to live free without any compromise. She forgets about Minnie and leaves her upset.