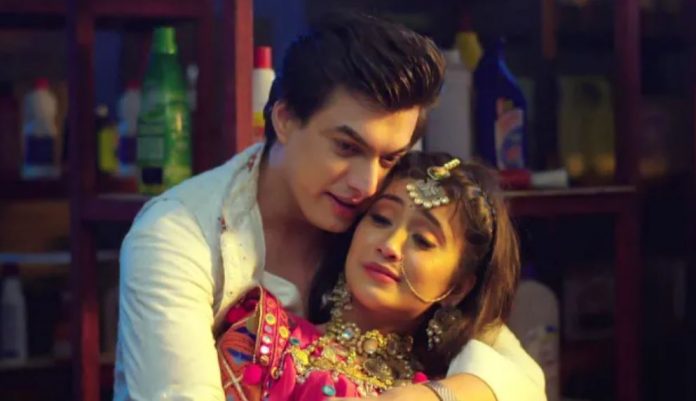 Yeh Rishta Sedated Kartik marries Naira Shocking entry adds twists Kartik and Naira are captive by the kidnappers. They shout on each other to get away, but they tend more close. He admits that he can’t live without her. He tells that he missed her a lot. They have a cute fight. He asks her why does she always get away from him. She admits that she loves him a lot, and always comes close to him when she wants to go away. She doesn’t wants him to face any troubles. He tells her that he missed her a lot and stayed in the guilt for breaking her heart by that one wrong question. He regrets a lot for it.

He sees the lotus tattoo made and recalls Kairav. He tells her that Kairav is their child, he loves him a lot as much as she does. He doesn’t want to separate them. He misses Kairav’s birth moment, since he always wanted to be with Naira in that moment. He asks her why did she take Kairav away. He realizes the hardships she faced when she decided to bring Kairav into the world and raise him alone. The families enjoy in the Dandiya event for long, for the sake of the kids. Kairav is happy with them.

Kartik asks Naira how could she face all the problems all alone. He tells her that he is scared to think of her struggles. He has many questions regarding her struggles. He asks her if she missed him. She tells him that she missed him so much each day. They live the moments again when she narrates about her life’s tough phase. She tells him how she worked hard to earn money to manage her delivery expenses. Kartik feels sorrowful knowing she was so helpless. Kartik also relives the delivery moment when Naira tells him that she had tried to call him as well. Kartik recalls the day when he got a call, but didn’t answer.

He tells her that he was living in sorrow and wasn’t in his own self. He apologizes to her. She tells him the sweet and sour moments. She tells him that she wanted him to be at her side. She failed to reach him and inform about Kairav’s birth time. Kartik curses himself for not answering her call that day. He tells her that he is responsible for her pain. He gets emotional reliving the moments again. They apologize to each other. She begs him to not snatch her child. He tells her that she faced many problems because of him, but now he won’t be separating Kairav and her. She is grateful to him.

Elsewhere, Damini gets strong evidences against Naira. She is hopeful that Naira will drop the case or lose in the court. She wants to see Naira in the court. She enjoys her pre-victory. Kartik and Naira propose each other for marriage. Kartik tells her that she got married even after the divorce. Kartik tells her that he wants to marry her once again. Naira accepts his proposal. They get few things around and light fire to make havan kund. They take the marriage rounds and get married once again, in the intoxicated state. They have a united moment against all odds. Vedika’s ex will be making an entry soon, which will mark Vedika’s exit from Kartik and Naira’s life. This comes as a relieve for the lovers in the coming track.