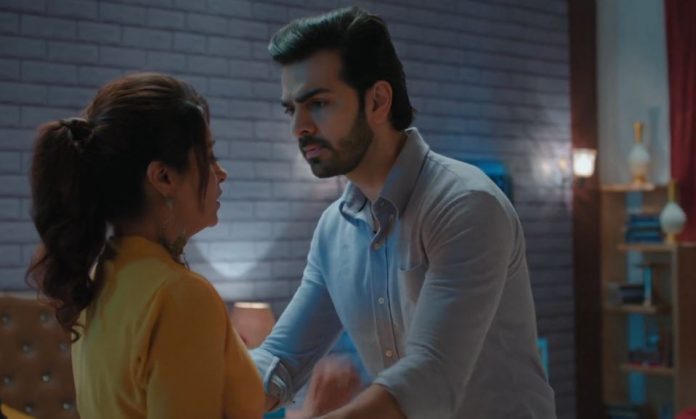 Kahaan Hum Stunning Twist Complicated love triangle Rohit is stressed about his complicated life. He shares his life’s miseries, that he can’t handle two girls. He doesn’t want to break Raima’s heart by telling her that he has moved on with Sonakshi. Same way, he can’t let Sonakshi go away by making a sacrifice of their love. He feels troubled thinking fate has played much unfair with him, he never got love in his life which he deserved. He badly wanted Raima before and fate snatched her from him.

He wants Sonakshi in his life and fears that fate will snatch her as well. He shares his heart out to Yash, who understands him well. Yash encourages him to be strong and face the situation. He knows Rohit can overcome this problem. Rohit doesn’t want to have a sobbing love story. He decides to find Raima and explain her about Sonakshi. On the other hand, Deepa confronts Pari about her affair with Rohan. She warns Pari against breaking Tanya’s marriage. She tells Pari that both families will suffer and her life will be completely ruined as well. Pari denies to have any relation with Rohan.

She tags Deepa to not be a marriage material that Akash is still in a love relationship with her. Deepa doesn’t accept the nonsense from her and slaps her. She tells Pari that she won’t take much time to expose her truth. She wants Rohan and Tanya’s marriage to stay. She asks Pari not to create troubles for a married couple. Pari feels humiliated by Deepa. She calls up Rohan to inform him about Deepa’s warning. Rohan assures her that he would handle Deepa and also Tanya. He asks Pari not to take any sort of tension because of Deepa. Deepa reaches Rohan to seek an explanation about his relationship with Pari.

He fears that Tanya might know the truth. Later, Naren and Veena share their views over Rohit and Sonakshi’s relation. Naren takes care of an ailing Veena and proves his life. She tells him that Rohit is also soft hearted like him. She wants Rohit to choose Sonakshi’s love. Naren doesn’t think Sonakshi is the right choice. He feels an actress can never become his bahu. He tells her that he would want Rohit to choose Raima, who deserves his love after so much suffering. Veena finds hard to explain him that love isn’t so calculative to come with terms. She leaves everything on fate.

She just wishes Rohit gets his true love. She hopes Naren gets to see Sonakshi’s selfless side. Sonakshi and Rohit reach Sumit’s house to meet Raima. Raima gets hyper and shouts on them. She expresses her hatred for Sonakshi. She tells Rohit that she doesn’t have a big heart to forgive an wrongdoer. Sonakshi pleads her innocence while Rohit supports her. Raima doesn’t want to listen to anything from Sonakshi. She takes the extreme step in anger and threatens of committing suicide if they force her to talk. Rohit and Sumit manage to handle her and keep her away from pointed objects.

Rohit knows Raima is crazy and reacts like her. Rohit shuts her inside a cupboard until she calms down. He wants Raima to sit down and talk to Sonakshi so that their misunderstandings can get cleared up. He lets Sonakshi explain about her broken engagement with Karan and the night’s complete events. Sonakshi comes out clean in Rohit’s eyes, but Raima doubts that she is just cooking a story. Sumit knows Sonakshi’s selfless side and supports her. He tells Raima that Sonakshi isn’t lying to her.

He also wants Raima to understand Sonakshi. Rohit begs Raima not to hurt herself and give them a chance. Raima asks him what does he expect from her. Sonakshi confesses her love for Rohit. She also declares her decision that she will leave from Rohit’s life. She tells Raima that Rohit would keep her happy. She wants Rohit and Raima to unite. She makes a love sacrifice and goes away from them. Rohit turns too upset when he fails to stop her. Raima sees his feelings for Sonakshi. She hugs Rohit, and finds him unresponsive. She drags him to Sonakshi’s house to unite Rohit and Sonakshi.