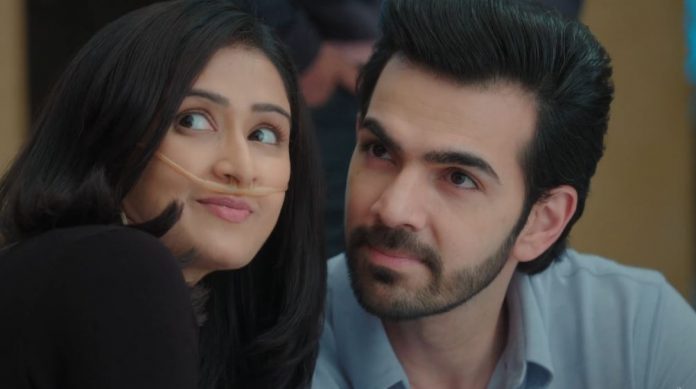 Kahaan Hum Unthinkable Raima Sonakshi Ex returns Rohit and Sonakshi feel the separation pain. She tells Suman that she had to unite Raima and Rohit. Suman asks her not to give such a sacrifice of love as in her tv show. She tells Sonakshi that there is a difference between her real and reel lives. She asks her to think as Sonakshi, not Parvati. Sonakshi tells Suman that she can’t hurt Raima’s heart. She sympathizes with Raima who had lost precious years of her life. Suman asks Sonakshi to not lose her love again. She decides to talk to Rohit, since love and marriage talks aren’t a joke. She wants Rohit to answer her. She feels Rohit had compelled Sonakshi.

On the other hand, Deepa makes Rohan tensed by revealing to Tanya that he is cheating on her. She shocks him to teach him a lesson. She leaves him with a warning. She asks him to change himself before Tanya learns about his affair. She asks him to forget Pari and not cheat Tanya. She tells him that this is just a warning for him, if he doesn’t mend his cheap ways, then she will soon expose his truth to the family. Rohan gets worried that Deepa will seriously expose his affair. He doesn’t want any divorce drama in his life.

Suman gets surprised when Rohit and Raima come home. She doesn’t let them come in. Raima asks Suman to let them come in since its about Sonakshi’s image keeping. She tells that she invited Sippys as well. Suman asks her why did she invite Sippys. Raima tells her that she wanted both the families to be together. She tells them that Rohit loves her and even she loves him a lot, their love is true that they have waited for each other for four years. She tells them that she is so happy to get Rohit back. She asks him to confess love for her. It gets too tough for him to say he loves her but he does this on seeing her fragile state. Raima asks him not to lie that he loves her. She very well understands that he loves just Sonakshi.

She does the unthinkable by accepting Rohit and Sonakshi’s love and uniting them. She tells the families that Rohit has moved on with Sonakshi and she has accepted this fact, since its not possible for someone for wait for many years for a life partner. She knows Rohit was missing love in his past. She wants to remain as Rohit’s past, knowing Sonakshi is his present. She asks him to be with Sonakshi. She wants to see them happy.

She wants to be Rohit and Sonakshi’s friend. She tells them that she isn’t crazy to become a vamp in their lives. She feels love will come knocking her doors soon. She gets willing to find love, someone like Rohit.

Moreover, Sumit meets them to return Raima’s bracelet. He flirts with Raima and proposes her. Raima finds him impossible. Raima thanks Sumit for helping her a lot unknowingly. She feels Sumit is a good person. Sumit gets a crush on her. He tells her that he got divorced and is single now. He gets falling for Raima. Sumit gets changing himself after meeting Raima.

Sonakshi likes Sumit’s positive change. Sumit apologizes to Rohit. He realizes he has done wrong with Pooja. Rohit hugs Raima happily that she is so understanding. Raima asks him to marry Sonakshi. Rohit’s family also wants the marriage to happen soon. Rohit and Sonakshi don’t want to marry so soon. Sumit assures Sonakshi that he will manage Netra and the shooting schedules.

He asks her not to worry about her work. Rohit doesn’t know if its right time to marry. Suman wants the marriage to happen soon. She feels Sonakshi deserves happiness.

Meanwhile, Veena gets stressed thinking Naren won’t be accepting Sonakshi for Rohit. She wants Rohit to convince Naren first. Rohit isn’t aware of Naren’s dislike for Sonakshi. Sonakshi looks forward to meet Sonakshi. She gets busy in her work. She sends a surprise gift for Rohit. Karan makes a re-entry in their lives. Karan meets Rohit to bring disgrace to Sonakshi’s character. Karan angers Rohit by speaking ill about her. What twists will Karan get for Rohit and Sonakshi? Keep reading.