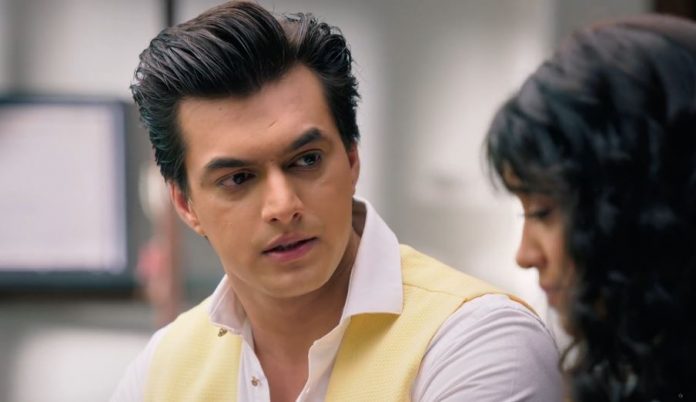 Yeh Rishta Kartik yearning confession for Naira Naira shocks Kartik by her untimely demand. She stops him from marrying her in the plain setup. She tells him that they will be marrying with all rituals at some temple. He tells her that her wish is his command, but they have to find any temple open at this time. She tells him that they can find the temple if they leave from the storeroom. He tells her that they will marry today some how. They lock the goons. They get free. They don’t find any temple to visit at night. They come home and find the temple there. He tells her that they can marry here right away. They get too tired. They decide to take a short nap before marrying. They reach her room and fall asleep.

Meanwhile, Naksh checks on Naira and drops Kairav to her. He misses to see Kartik there. Kartik and Naira’s cute moments come to an end. They wake up next morning and find each other. Naira asks Kartik what is he doing in her room. She realizes that he had spent the night in her room, which won’t be a good news for anyone knowing it. She asks him to rush to his house before anyone learns his presence. Kartik tries to recall how he got there and what had happened with them after the kidnapped injected them drugs.

Naira too doesn’t remember everything certainly. She tells him that they have to forget whatever happened and just be at their lawyer’s office in some time to sign the divorce legal papers. Kartik gets heartbroken. He yearns to get Naira back. He doesn’t remember that they confessed love and wanted to marry each other last night. On the other hand, Vedika feels terrible on knowing that Kartik isn’t home since night. She informs Dadi that Kartik is with Naira and had spent the night at Naira’s house.

Dadi can’t believe this. She understands Vedika’s pain. Vedika isn’t able to handle her marriage since Kartik isn’t giving her a single chance. She knows Kartik cares for her, but doesn’t love her. She feels her marriage can’t survive if Naira stays close. Dadi can’t wish for Naira and Kairav to get away from them. Vedika tells Dadi that she can never take Naira’s place in Kartik’s life. She is much disturbed. Dadi sympathizes with her. Naira gets ready to meet the lawyer. Kartik gets confronted by his family. They ask him about spending the night at Naira’s house.

Vedika asks him if he went there to meet Kairav. Kartik clears the misunderstanding. He tells about the shocking kidnapping and drugged state. He asks them to believe him, he was not in senses and doesn’t remember how he reached Naira’s house. He tells them that Naira also stated the same, that she doesn’t remember the series of events. Vedika is upset and wants to believe him. Goenkas are worried thinking of the kidnapping. They sympathize with Kartik. Later, Kartik and Naira meet at Damini’s office.

They don’t remember anything that happened. They realize that they tried to marry in the intoxicated state. Vedika reaches there to give him the legal papers. She overhears Kartik and Naira’s conversation. She learns that they got married again in the drugged state. She can’t believe this. Damini asks Kartik and Naira to sign the legal case papers. Kartik and Naira’s wonderful love chemistry gets observed by Damini. Damini makes them sign the papers. She doesn’t want to lose her promotion because of their emotional side. She doesn’t want them to bring disgrace for her career. She warns Naira against the custody battle.

She tells Naira that she will make her lose, the battle is going to be very tough. Naira doesn’t get scared of her warning. She tells Damini that she will prove a mother’s capabilities to her. Damini believes in her talent and capabilities. She tells Naira that her motherly emotions won’t work in the court. Damini can do anything to win the case. Suwarna finds Kartik too worried. Kartik makes a confession that he is badly yearning for Naira, he wants her back in his life. She finds him falling helpless. She meets Naira to convince her to drop the custody case. Naira doesn’t listen. She wants her son at any cost. She wants Kartik to move on with Vedika. Suwarna feels Kairav won’t be able to handle the truth that his parents are fighting for his custody. Kairav overhears them and realizes Kartik and Naira’s uneven terms.