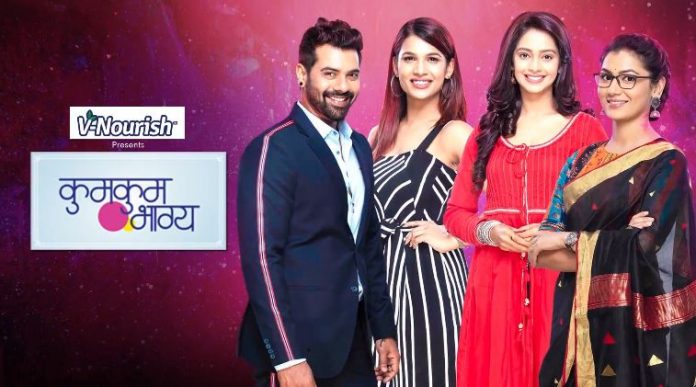 Kumkum Bhagya Stunning Upcoming Hits on Zee5 Priyanka gives a false statement to Police and tells that Rishi molested her. She acts as the victim and projects Rishi as molester. Pragya comes there and tells Abhi that Priyanka had come to her house and told that she wants to marry Rishi. She says she refused to agree to Priyanka’s sayings. She says then Priyanka threatened to cut her veins if I don’t let her marry Rishi. Priyanka gets tensed and cries, saying Pragya is lying. Abhi says she doesn’t lie. Pragya looks at him seeing his trust. Abhi asks Priyanka why did she do this? Priyanka thinks to cook up a story. She gets to learn Abhi and Pragya’s strong bond, which is unbreakable by anyone.

Gudiya Hamari Sab Pe Bhaari: Radhe asks Nanhe lal about the song on which Gudiya and Sweety will dance to prove that who is better as Sarla. Later, both the girls dance and compete with each other. Nanhe Lal’s Constable comes there and tells that they found a dead body and seems like it is your samdhan ji. Nanhe Lal slaps him. Radhe and Pappu cry. Gudiya asks what happened? Pappu says Amma is no more and cries.

Tujhse Hai Raabta: Kalyani tells Anupriya that they shall play a game before OT Rasam. She says Anupriya’s bridal dress is hidden in Aao Saheb’s room and your Adinath’s sherwani is hidden in Kaka’s room. She asks them Anupriya and Adinath to search for each other clothes. Anupriya goes to Sarthak’s room while Adinath goes to Aao Saheb’s room to search for Anupriya’s dress. Anupriya searches for Adinath’s Sherwani and finds her photo album. She gets teary eyes and cries. Kalyani comes there and says I have seen whatever I wanted and understood also that this marriage is a lie.

Anupriya confessed that the marriage is a lie. Kalyani is surprised and asks her to say the truth, but Anupriya refuses. Later, Atharv insists Kalyani to watch the video, but she says that she will see later. Atharv says Aai doesn’t listen to me. Kalyani takes the camera to play the recording and faints due to the 24 hour fast, and the camera gets dropped from her hand. Atharv shouts Aai. Malhar and others get shocked. Asawari tries to steal the camera.

Main Bhi Ardhangini: Mohini tells Vikrant that she will not marry him. She will not do injustice with other women being a woman herself. Vikrant asks a woman? Mohini says she still has mangalsutra of your name and as far as I remember, you didn’t do her last rites so she is your wife. She says according to Shashtra and rules, you can’t marry anyone until your first wife is there. Vikrant looks on shocked.