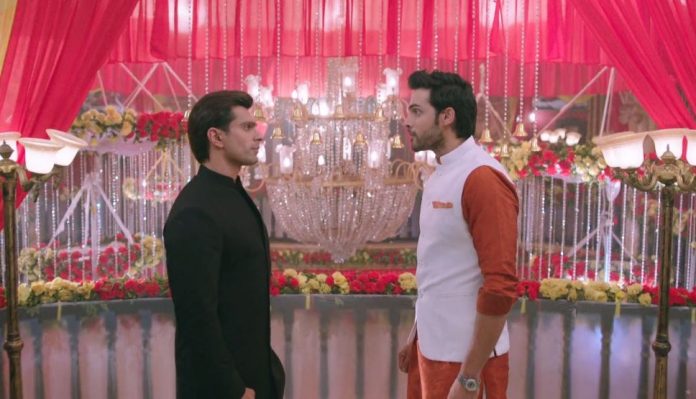 Kasautii Anurag Bajaj Challenge Komolika fresh start Anurag and Shivani learn the reason behind Prerna’s marriage with Mr. Bajaj. They can’t believe the truth that Prerna has sacrificed her entire life just to save Anurag. Anurag gets angered knowing Mr. Bajaj blackmailed Prerna to marry. Prerna is worried and deals with the emotional storm in her heart. She loves Anurag a lot. She thinks of her sorrow that she can see her love, but can’t accept him. She wonders why did she face this day. She cries out her sorrow. Anurag feels Prerna had always hidden the truth from him.

He wants to confront her about deciding for their lives alone. Mr. Bajaj’s manager Mehra pays money to the goon and asks him to never mention Mr. Bajaj’s plans to anyone. Anurag meets Prerna to confront her about marrying Mr. Bajaj. He cries that she had made this sacrifice just for her. He finds her sleeping. He hugs her with love. He can’t tolerate the truth that she ruined her own life to make his future better. When they wake up in the morning, he tells her that he will always be with her and never leave her. He wants to prove Mr. Bajaj’s evil to her so that she herself leaves her so called husband. He wants Prerna to clear her doubts first.

He tries to make a plan to win back Prerna. He knows she loves him a lot. He wants to confront Mr. Bajaj as well. Elsewhere, Komolika gets violent when she sees her new face. She wants to bash up the doctor for snatching her old face and identity. She wants her old face back. She wants to look pretty like always. She gets surprised when Ronit meets her. Moreover, Anurag blames Mr. Bajaj for separating lovers. Mr. Bajaj clears that Prerna doesn’t love Anurag. Anurag tells him that he knows the truth about Prerna’s sacrifice. He is happy to know that Prerna still loves him. He tells Mr. Bajaj that Prerna will soon break the marriage.

He asks Mr. Bajaj not to expect high. He tells that he has learnt the truth by the accidental recording. He now wants to challenge Mr. Bajaj and win over him. Ronit tells Komolika that he decided to get her face changed by the plastic surgery so that she gets a new identity, new hope and a new life. He wants her to make a fresh start. He explains that their dad doesn’t love her anymore. He asks her to forget dad and think of her future. She wants to know about Anurag. He tells her that Prerna and Anurag are separated, since Mr. Bajaj married Prerna. He asks her to marry Anurag if she wants.

She gets happy that Mr. Bajaj kept his promise and destroyed Anurag completely by snatching his love. Anurag tells Mr. Bajaj that he is the evil which will end this Navratri. Mr. Bajaj doesn’t care of his warnings. Anurag doesn’t want anyone to come between Prerna and him. Anurag throws an open challenge. Mr. Bajaj wants to kill him. Komolika looks forward to meet Anurag. She gets decked up like before and goes to meet Anurag. Anurag finds the goon to gather proof against Mr. Bajaj. He will be exposing Mr. Bajaj and throw him out of his life.