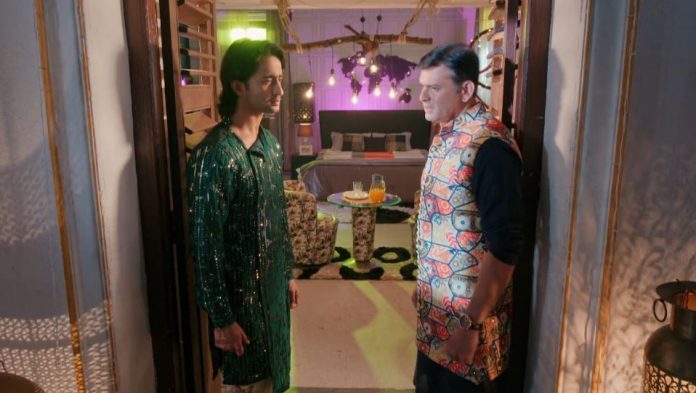 Rishtey Pyaar Mehul truth revelation stuns Abir Abir apologizes to Mishti. She tells him that she has realized her mistake of blindly trusting him. She feels Abir has broken her trust. They both get into pain and sorrow. They feel distanced because of Kunal’s truth. Abir shatters when Mishti goes away from him. He wants to explain to her that he always took decisions for the betterment of the family. Meenakshi discusses about Abir and Mishti. Nanu feels they should fix Abir’s marriage soon. She doesn’t think Abir needs them now, since he is running after his dad. She tells him that Abir is with Mehul only. Mehul tells her that he is much hurt by her words. He asks her not to break his heart.

She wants him to leave from his house. She wishes he never met Abir. She expresses her hatred for Mehul. Parul tells Mehul that Abir is righteous, once he knows the entire truth, he will support Meenakshi only. She warns him that Abir will never support him, knowing his crimes. She asks him to leave. He asks her what will she do when Meenakshi kicks her out of the house. He tells her that he will get Abir, while Meenakshi gets Kunal. He tells that she will be left alone and have no place to go. He instigates her against Meenakshi.

She shows her belief on Meenakshi. She tells that Meenakshi has always supported her and will be the same forever. She doesn’t care for Mehul. Abir and Mishti miss each other and cry. Abir gets upset watching Kunal and Kuhu’s verbal fight. Kunal is angered that Mishti slapped him. Kuhu finds it right. She feels Kunal has cheated all of them and the slap was justified. She scolds him for planning such an evil thing and breaking her heart by slapping the divorce on her. Kunal doesn’t realize his mistake. He feels everything is justified since he hates Mishti. Kuhu admits Kunal and her planning to frame Mishti. Abir gets a huge shock on learning their mistake.

He can’t believe that they lost their senses in hatred. Kuhu apologizes to Abir. Kunal has no sense of responsibility. He doesn’t think he owes any explanation to Abir. Meanwhile, Parul is stressed about Mehul. She wants to talk to Abir to postpone the marriage until things get fine in the family. Meenakshi understands that Parul spoke to Mehul and got disturbed. Parul denies at first. She tells Meenakshi that Mehul is evil-minded. Meenakshi knows that Mehul will try to break their unity to win. She asks Parul not to fall in Mehul’s trap.

She promises to always support Parul. Parul gets a big relief. She finds the jewellery missing. They doubt Mehul. Mishti wants to know why she couldn’t earn Abir’s trust. Abir wants to tell her the truth of Kunal’s eloping. Mishti is too hurt. When he justifies Kunal’s emotions, she gets irritated. She asks him to accept Kunal’s fault and rectify it. She doesn’t want to talk to Abir unless he stops supporting Kunal. Abir tells her that Meenakshi hates her and that’s why Kunal has the same feelings.

Mishti tells him that Kunal can’t follow anyone’s mindset, he has his own thinking. She tells him that Kunal’s actions are wrong and he can’t justify it. She cries for Kuhu’s future. Abir is also tensed about Kuhu. Kunal feels guilty over cheating Kuhu. He didn’t wish to ruin her life. Later, Mehul gives emotional support to Abir. He connects to Abir by his poetry. He asks Abir to share his sorrow. Abir shares the shocking incident with Mehul. Mehul feels Kunal is divorcing Kuhu, which means he is just like Meenakshi, who has no belief in relations.