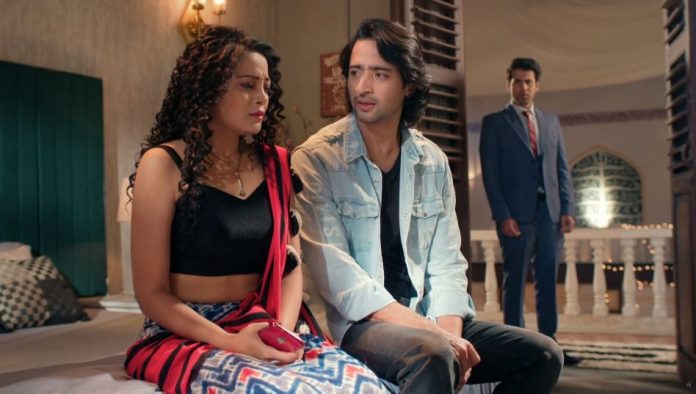 Rishtey Pyar Saddened Abir Kuhu accepts divorce Abir gets too upset while thinking of Mehul. He feels Mehul doesn’t know anything about his family, but he is misjudging them by a single incident. Abir wants to explain Mehul that Kunal isn’t so bad. He gets Mishti’s love letters. He misses Mishti on reading her love vows. He feels he couldn’t make promise to Mishti. He wants to make new promises and fulfill as well. Mishti also misses Abir. She wants to meet Abir. Abir tells Mehul that he is missing Mishti. Mehul wants him to meet Mishti and sort their issues.

He asks Abir to think over his decision of marriage. Abir tells him that Mishti won’t get respect in the family if he marries her against the family’s wish. He wants a good life for Mishti. He wants to give her happiness. He didn’t imagine to see this day. He can’t make a choice between Mishti and family. He can’t hurt Meenakshi either. He goes to meet Mishti. Mehul feels he is winning Abir. Mishti feels hurt that Abir lied to her. Abir feels sorry and wants to talk to her. He loses courage to talk to her. Mishti finds Varsha worried.

She thinks Varsha has a right to know about Kuhu. She wants to tell about Kuhu’s divorce. She goes ahead to tell Varsha. She gathers courage to tell Varsha. Varsha attends Kuhu’s call. Kuhu sounds normal and takes her permission to come home. Mishti changes the topic. She feels Kuhu wants to come home and break the divorce truth herself. She doesn’t tell anything to Varsha. She hopes Kuhu comes home soon. Varsha hopes everything is fine in Kuhu’s life. Kuhu acts strong, but shatters within. Kuhu tells Abir that she wants to go home, she wants to live between dear ones. Kunal feels guilty when he finds Kuhu crying. Abir feels Kunal should take responsibility of his mistake and apologize to Kuhu. Kunal gets helpless.

He doesn’t want to keep the unwanted marriage. Kuhu apologizes to Abir for framing Mishti and maligning her image. Abir tells Kuhu that he shouldn’t do wrong on anyone’s saying. Kuhu tells him that she has done everything with a hope to get Kunal. Abir explains Kuhu that she shouldn’t pamper Kunal. He feels Kunal won’t change. Kuhu packs her bags to go to Maheshwari house. Meenakshi wants Parul and Nidhi to search for the necklace in Mehul’s room. She asks them to be careful. They learn that Kuhu is going to her Maayka.

They get worried. Kuhu lies that everything is fine and she will return soon. Abir feels responsible for Kuhu’s life. Meenakshi wants to know what’s happening in her family. Abir wants to meet Mishti to clarify. Mishti gets unsure about meeting him. Kuhu brings Kunal’s truth out. She reveals that Kunal spoke on divorce on the same day of marriage. Abir can’t believe that Kunal was so determined to break the marriage. Mishti had to lie to Varsha because of Abir. Abir wants to fix things in their lives. Kuhu and Kunal part ways. She accepts his divorce plea unhappily. Will Kunal change his decision? Keep reading.