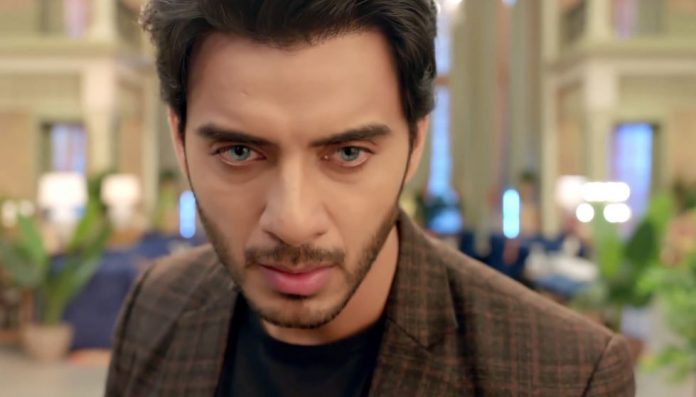 Tellyreviews Star Delights Top 3 Today Upcomings Ronak takes Muskaan for the blood tests. They both undergo the tests. Ronak asks Hanumant to gift a spy camera teddy to Lovely from his side so that she doesn’t doubt his plan. Hanumant gives the teddy to Lovely to know her plans. He tells Gayatri that Muskaan went somewhere and Ronak went to find her. Bua tells them that Muskaan has run away since she knows the truth. Lovely tells them that Muskaan is Ronak’s love, they shall wait until the reports come. She speaks in favor of Muskaan. Ronak watches the camera feed. He cries happily that Lovely changed.

He is happy that Lovely has forgiven Muskaan by her heart. Muskaan tells him that Lovely always speaks her heart, unlike Bua who cheats them by her sugary talks. Ronak and Muskaan meet Lovely. They gift her a big teddy and thank her. The family prepares for Ronak and Muskaan’s engagement. Muskaan tells him that she will kiss him post their engagement. Ronak gets the shocking reports. He tells them about the positive results. Gayatri can’t believe this. Muskaan gets worried. Bua asks Gayatri to stay away from Muskaan, who is really ill.

Lovely asks Bua not to treat Muskaan in such a bad way. She recalls learning Ronak’s plans to spy on her and acting a step ahead. Bua asks Ronak not to get engaged to Muskaan. Ronak asks her to stop it. He tells Gayatri that the reports got changed, so he got the tests done in another lab also. He reveals the negative reports. He tells them that someone has done this to separate Muskaan and him. He tells them that their enemy is still close. Ronak tells them that he will not spare his enemy next time.

Lovely tells Ronak that she will leave the house if he suspects her. Ronak tells her that he doesn’t doubt her. He wants her to live with them. Ronak and Muskaan get engaged. Their kiss challenge drama goes on while they perform happily in their engagement ceremony.

Yehh Jadu Hai Jinn Ka:
Jinn doesn’t want Aman and Roshni to unite. He wants Roshni out of his battle with Aman. He wants his revenge on Aman. Roshni comes in between to hinder Jinn. He wants to kill Roshni first. He makes an attack on Roshni. A car flies in the air to fall over her. Roshni gets freezed. She can’t help herself. Aman saves her in the nick of time. When she faints, he takes her to lie her down in the park. He watches her peaceful face and hears her cute talks. He likes her. He isn’t aware of her identity, that she is a Tawaif’s daughter.

He goes home to meet his family and informs them about the Jinn’s arrival. He tells that the Jinn is surely coming to take his deposit. His family wants to be prepared as well. They hear Aman’s big change when he turns evil and attacks the family. They ask Aman to get married soon, so that his life partner’s fate saves him. They don’t want him to take risk. Aman doesn’t want to marry anyone, since that would ruin a girl’s life. They make an emotional moment to convince Aman. They ask him to protect them from himself. They want Aman to meet his would be fiancee Ada. Aman agrees to meet Ada and her family.

Aman shockingly gets influenced by Jinn’s presence outside the house. He soon changes into a beast. He can’t control himself and rushes out of the living room. His family covers up his change and absence. Aman attacks his mum and aunt. He loses his control on his heart. They get badly hurt by his beast avatar. Dadi hurts Aman to bring him back to his normal avatar. Dadi has seen the Jinn sign and understands that Jinn has followed Aman home. She gets upset to injure Aman. Aman has to save himself from the chasing Jinn. How will Roshni become Aman’s protector? Keep reading.

Sufiyana Pyaar Mera:
Saltanat and Zaroon’s romance breaks because of Krish. Krish wants to spend time with them. Krish’s mum gets the photo cuttings and holds evil intentions. Zaroon doesn’t want Saltanat to go away soon. They have a romantic moment. Shah and Sharma families dine together. Indu gets upset seeing the non-veg food. Rubina asks her to calm down and keep them informed about their choices. Indu wants to make a leave. Madhav tells them that they will be shifting in the evening. He packs his bags. He wants to get back home. He wants the worker to fix the damaged house. The worker looks for someone in the house. He finds the house much damaged.

Krish wants to stay in Saltanat’s house. Nilam doesn’t want Madhav to leave. Dadi and Hamza know Nilam is upset. Krish asks Dadi to stop Madhav from going. Nilam tells her plans to Krish. She also wants the same thing. A woman scares the worker and makes him run out of the house. She is Madhav’s wife, who is much evil. Nilam announces a cricket match between Shah and Sharma families. Saltanat asks Madhav to leave only if he wins the cricket match. Madhav agrees to her condition.