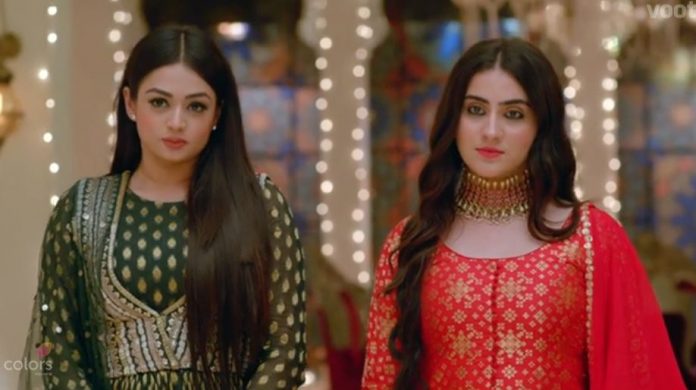 Bahu Begum Storm strikes Noor Shayra reacts Shayra and Noor join hands against Ghazala. Noor likes the jewellery when Shayra shows it to Shayra. Noor asks Ghazala to give her some kilos of gold also. Ghazala tells her that jewellery isn’t cheap, she won’t give her anything. Noor tells Ghazala that she will take the diamond necklaces. She argues with Ghazala. Shayra chooses her favorite jewellery until Noor keeps Ghazala busy. Noor gets the jewellery boxes and runs. She troubles Ghazala. A new storm strikes Noor’s life.

Noor becomes the target of everyone’s anger. The lawyer meets Razia and family. He tells them that Azaan has signed the alimony papers, which entitles the house to Noor. Azaan checks his signs. He tells them that Noor brought the papers to him and took his sign. He asks Noor to answer him, why did she trick him. Shayra asks Noor to clarify herself if she is right. Noor tells Azaan that she speaks her heart out always, she never cheats anyone. She tells them that she doesn’t want the property, she doesn’t want the money, she just wants their love. She tells him that she will return the property back on his name.

She blames Asgar and Surayya for changing the papers. They ask Noor not to blame them for her mistakes. Noor burns the papers and proves her innocence. She scolds the lawyer. She tells them that she just asked the lawyer to make divorce papers, without the alimony clause. She lectures him for his mistake. She asks Azaan to believe her innocence. Shayra shows her belief on Noor. Azaan is still puzzled about Noor’s actions. She tells Ghazala that she will check Surayya’s room to find the documents. Ghazala and Shayra also help Noor.

Surayya stops Noor from wrecking everything. Asgar and Surayya vent our anger on Noor for her nonsense accusations. Noor tells Azaan that Surayya has made the wrong papers and replaced it when they signed the papers. Ghazala asks Noor to better accept her mistake and apologize to Azaan, instead of playing the blame game. Shayra tells them that Noor doesn’t lie. Ghazala asks Shayra not to be innocent, Noor had taken advantage of her mum’s death, she can do anything. Asgar asks Azaan to check Noor’s room for the original documents. Shayra stops them from checking Noor’s room. She takes a step to totally support Noor.