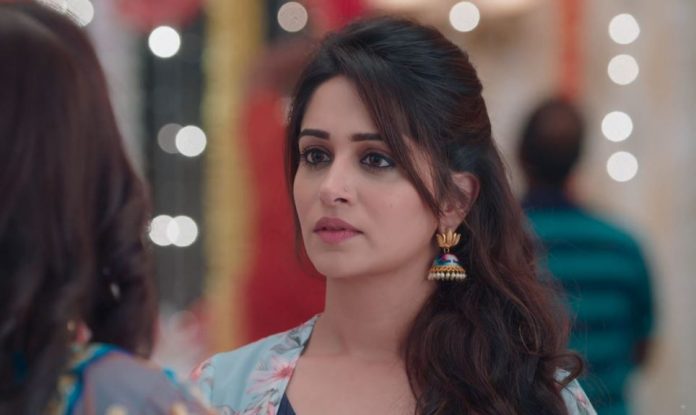 Hotstar Exclusive Kahaan Hum Top 4 Spoilers Meenakshi surprises Abir by fixing his alliance with Mishti. Abir didn’t expect Meenakshi to take this step. Meenakshi and Nanu talk to Maheshwaris. They happily fix the alliance. Kunal opposes the alliance. Abir gets angry and tells that his family is preparing to separate Mishti and him. He is upset that Kunal is hurting him. Kunal tells Abir that Meenakshi has made the pre-nuptial agreement, which states that Meenakshi won’t ask for money after the marriage. Maheshwaris get angry on Meenakshi’s condition. Abir knows that Meenakshi has wrong thinking and she can do anything. He tells her that everyone knows Meenakshi’s truth.

He exposes Meenakshi’s evil truth to Maheshwaris. Meenakshi tells him that she is just making sure that Mishti doesn’t cheat them. Abir knows Mishti is too hurt. He apologizes to Mishti. He doesn’t want to live with his family. He declares that he will marry Mishti and move out of the family. Mishti wants to unite Abir’s relations with love.

Kahaan Hum Kahaan Tum:
Sonakshi gets busy in her shoot. She doesn’t reach the function on time. Raima fills her place to cheer up Rohit. She didn’t wish Rohit and his family to fall into an awkward position while answering the guests. Raima dances with Rohit in his engagement.

They get paired up in the paper dance. Sonakshi isn’t jealous of Raima. Suman gets angry that Raima isn’t understanding the limits of friendship. Rohit and Raima have pure friendship and are clear about their relation. Suman asks Sonakshi to keep Raima away from Rohit. She doesn’t want any trouble in Sonakshi’s life. She feels already there had been much drama for Sonakshi. Mahesh also becomes part of the engagement function. Mahesh steals the engagement ring to stop it. The rings go missing, which causes a new problem for Rohit and Sonakshi.

Sufiyana Pyaar Mera:
Madhav feels bad when he finds Saltanat and Zaroon romancing. The Shah and Sharma families play the cricket match. Shah family wants to win the match to stop Sharma family from leaving. They want to make the decision by playing the cricket match. Madhav starts developing feelings for good-hearted Saltanat. He gets helpless. He knows she is someone else’s wife. He wants to leave from her life. Krish gets adamant that they will live with Shah family. Zaroon wins the cricket match. He asks Madhav to stay back with them. Dadi tells Zaroon that he has invited troubles by having Madhav with them. Madhav’s wife enters Shah mansion to create a havoc. She reaches Krish. Saltanat gets alert and protects Krish from the unknown lady.

Muskaan:
Ronak tricks Muskaan. He acts shy that he doesn’t want to reveal his tattoo to anyone during the haldi ceremony. He poses a new challenge to Muskaan. He orders a dress for Muskaan. He asks her to wear it for his sake. He expresses his wish to see her in this dress. Muskaan accepts the challenge. She asks him to be shirtless during the haldi. She wants him to show his tattoo to everyone. Meanwhile, Sir ji gets troubled knowing he needs to arrange more money for his surgery. He wants his aides to rob some money and get it for him. He calls Lovely with a plan. Lovely agrees to him and brings him home to attend Ronak and Muskaan’s Haldi ceremony.

Ronak gets high security to protect the family. He wants everyone to be fine. Ronak welcomes Sir ji home, unaware of his truth. Ronak gets the ordered dress delivered for Muskaan. He pulls her leg. He puts her in trouble in front of Gayatri. Muskaan understands his plans. She manages to hide the parcel from everyone. Sir ji finds the jewellery and asks Lovely to keep it safe.

He tells that he doesn’t want to get blamed for any robbery. Lovely doesn’t care for Muskaan’s jewellery. Sir ji calls his men inside the house to steal the jewellery. He is in need of money. His men enter the house and steal the jewellery. They attack the witness, Bua. Ronak reveals his tattoo to everyone. The family sees Muskaan’s name tattooed and praise his love. Ronak gets haldi applied to himself. Muskaan and Gayatri also fall in trouble because of the thieves. Muskaan fights him and calls Ronak for help. Ronak heroically saves his family again. Muskaan surprises Ronak by wearing his gifted dress. They get into a romantic moment.