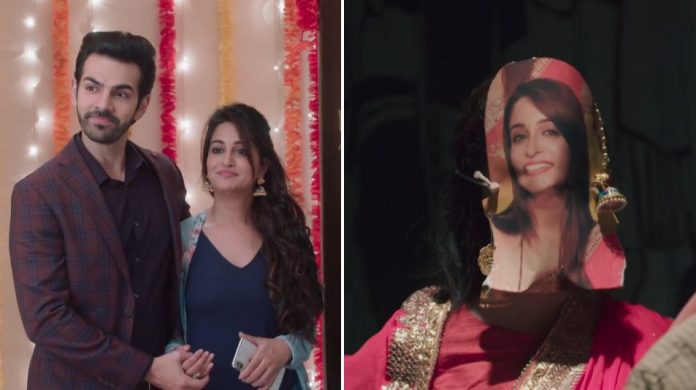 Kahaan Hum StarPlus Shocker Sonakshi Kidnapping Rohit and Sonakshi get over the accident of the lights falling down because of Mahesh. Rohit saves Sonakshi in time. Sumit, Netra and the entire crew want to check on the reason for the accident. Netra assures that she will find out and get things fixed. Sonakshi doesn’t call off the shoot. She tells Netra that she wants to help her in finishing the shoot soon. She wants to enjoy her time when she is with Rohit. She doesn’t want the work pressure to lower her happiness. On the other hand, Suman wants Pari to get involved in the marriage arrangements. She reminds Pari how much Sonakshi did for her like a motherly figure.

She asks Pari to at least show some enthusiasm and participate in the functions happily. She gives a warning to Pari. Pari gets convinced. Rohit and Sonakshi arrive home. Suman tells them that she spoke to Veena and fixed everything for the first function, that’s engagement. Rohit plays a prank by demanding dowry. He asks Suman to fulfill his demands, else he won’t be marrying Sonakshi. This brings tension for Suman for a while. Rohit then presents his demand, that’s Madhuri’s presence in the marriage function.

He feels its not a big thing for Sonakshi, since she is also in the same profession. Suman pampers Rohit with love. He wants their relations to always stay the same. Rohit asks Sonakshi to try and get Madhuri in their marriage. Sonakshi doesn’t promise him. She tells him that Madhuri is a film actress, and it won’t be possible for her to get her for their marriage event. Mahesh reaches close to Sonakshi. He spies on her and gets more possessed. He wants to get her in his life. He feels lost in his marriage, since his wife doesn’t love and respect him. He cries out his sorrow over his bad marriage. He wants the perfect wife Parvati for him.

On the contrary, Naren doesn’t want to accept Sonakshi in the family. He wants to avoid the marriage. Sukhmani explains him that Sonakshi proved out to be a nice girl, Rohit loves her and they should support his choice. She tells him that she will become Sonakshi’s guarantor. She is sure that Sonakshi is the right person for Rohit. Naren unwilling agrees but gives them a warning, that Sonakshi’s marriage with Rohit won’t stay for long. He feels he knows Rohit more. He tells them that Rohit would not like the media attention that follows the tv actresses. Veena announces to the family that Naren has agreed to accept Sonakshi.

She asks them to celebrate and dance. The Sippys plan grand wedding functions for Rohit. Rohit and Sonakshi get into a romantic moment, which angers Mahesh. Sonakshi loses her earring. Mahesh gets it and regards it a love token. He gets more psychotic. He goes a dark place where he makes a mannequin ready as Sonakshi’s character Parvati. He expresses his love for Parvati. He wants Sonakshi madly. Rohit dances with his family when they request him for a performance. Naren doesn’t like his family getting mad for Sonakshi.

Sonakshi is worried for the expenses. Suman reveals that she already spoke to Veena and decided to share the expenses equally. She asks Sonakshi not to stress herself and just enjoy the functions thoroughly. Mahesh wants to stop Sonakshi’s marriage. He plans to kidnap her. He vows to stop the marriage. Mahesh risks his life and comes in front of Akash’s car, just to meet Rohit and get an entry into Sippy mansion. He plans to harm Rohit and make way to kidnap Sonakshi.