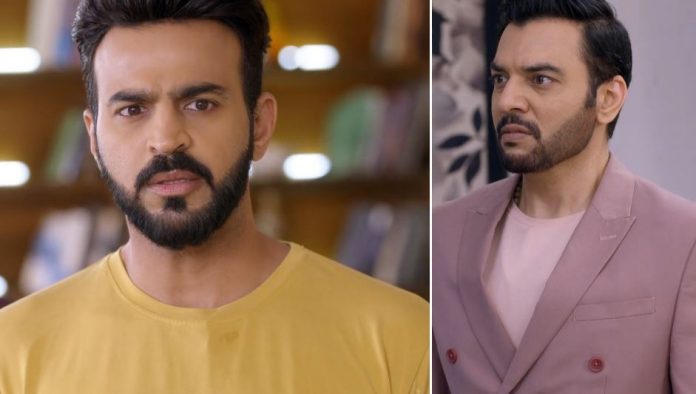 Mohabbatein Huge troubles Arijit master stroke Ishita wants strength to fight her enemies and protect Raman. He tells her that he will always support her and become her strength. He tells that they will win over the evil on the day of Dussehra. He wants their life’s Raavan to get finished. He tells that the entire family is there to support them. Everyone supports Ishita like always. On the other hand, Natasha is glad to know the entire chapter of Sunil’s blackmailing. Sunil tells her how he has managed to get her bailed out by Arijit’s help. He tells that he had stabbed the doctor, Arijit was blackmailing him and now he is blackmailing Arijit by his secret. She wants to trap Arijit well.

She knows Arijit can help them in getting Shardul. Arijit is angered that Sunil is taking advantage of Neeti’s secret. He wants to get rid of Sunil. Bhuvan advises him to kill Sunil and Natasha also. Arijit tells him that he isn’t a criminal, he doesn’t kill people like that. He wants to find some way to secure Neeti. Meanwhile, Ishita gets an idea to find Neeti by tracking her by using her medication details. She tells them that they can target the local chemists and shortlist to find Neeti’s location.

The family likes her smart idea. She tells them that Karan can help them. Karan wants his manager to find out about Neeti’s chemist. Ishita is relieved that finally she will be knowing about Neeti. She tells them that they will also be learning about their hidden enemy, who is still a mystery for them. Raman breaks the good news in the family that Yug has managed to get the contract by quoting the right quotation. The family wishes Yug for his success. They tell Yug that they shall celebrate this good news. Their belief in Yug is proved true. Raman and Yug rush to the office to meet the investors and talk about the new project. Yug feels confident by his success. Raman is sure that Yug will prove out to be a good businessman.

Later, Natasha and Sunil meet Arijit and ask for the money. Arijit gets irritated by them. She poses her demands. She asks him to kidnap Shardul for her. She tells him that she just wants Shardul for a short period, she will free him afterwards. Arijit doesn’t think the kidnapping would be easy. He tells her that he won’t help her. She threatens to expose his truth to Bhallas. She counts his crimes.

She tells him that she has done much wrong with Bhallas, and they have a right to know it. Arijit gets worried. He loses his cool. Bhuvan asks him to accept Natasha’s demand, since their game can’t get over this way. Consequently, Ishita meets Neeti’s doctor to get her prescription. She wants Karan to locate the chemist soon. Karan passes the details to his manager. Ishita and Karan try to get the chemists details to track Neeti. Ishita wants to meet Neeti and find out the mystery. Arijit makes a big plan to trouble Raman and Ishita, and also target Sunil and Natasha. He wants to target four of them with his one master stroke.