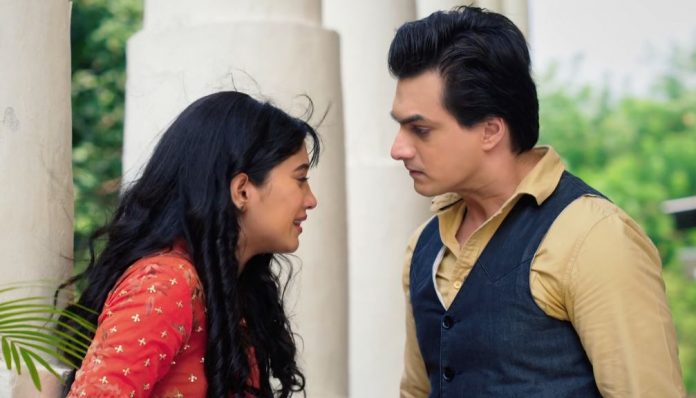 Yeh Rishta Preview Kartik Naira Unimaginable Twist Damini questions Naira about the big secret hidden from the family. She asks her to bring out the secret since there can’t be any better time to do so. Naira fears that the abortion attempt truth is close to get revealed. She doesn’t want the family to know it. She tries hard to stop Damini and prays for the truth hiding. Damini doesn’t listen to her. She tells the family that Naira has cheated them. She tells that Naira didn’t just do wrong with Kartik, but also their families. She asks them to withdraw the sympathy from Naira. She reveals that Naira was never wishing for the child, she felt the pregnancy was unwanted.

She tells them about Naira’s attempt to abort the child. She asks Naira to confirm the truth. Naira admits that she had gone for the abortion. Damini tells them that Naira is fighting the custody battle for the same child which she wanted to abort. She asks Naira how did she get possessive about the child now, when she was insensitive before. Naira gets humiliated by Damini, who questions her motherly emotions. Kartik can’t believe this truth either. The families also get in shock, since this is something unimaginable from Naira’s side.

The truth leaves Kartik stunned. Naira expects him to speak up. He feels disgusted by her move. Kumar asks Damini not to humiliate his client. Damini answers Naira about putting Kairav’s health in risk. She tells them that Kairav is suffering because of his mum’s mistake. She tells that Naira can never be a good mother. She blames Naira for making Kairav away from his father. Naira breaks down in the court. She turns speechless when Damini hits questions at her. Naira weeps and runs out of the court. Damini tells the judge that Naira has always been a coward, she can never face any situation outright.

Kumar wants some time to get back Naira. They get the next hearing for the case. Kartik goes to seek an answer from Naira. Elsewhere, Vedika sinks in guilt that she is hiding her past from Kartik. She wants to hide her past from Goenkas also. She gets a huge shock when her ex calls her up. Her ex has returned with a purpose. He calls up to threaten Vedika. Vedika wants her family support. Meanwhile, Kartik confronts Naira for her decision to abort the child, for whom she has fought with the world. He tells that she wanted their child when she was critically ill. Naira doesn’t want to answer him.

She was afraid that she won’t be able to give father’s name to her child. She knew Kartik was doubting her character and might have not accepted their child. She had her own reasons for her thought to abort the child. She tells him that she doesn’t want to answer him about her past. Kartik turns mad by her silence. Kartik wanted to know the reason for her worst decision to end their love sign. Moreover, Singhanias and Goenkas get into a fight, knowing about Naira’s decision. Goenkas feel she is taking revenge on them by hurting them so much. Singhanias support Naira. They don’t want to judge her until they know the reason.

Manish is tempered that Naira has always disrespected them and hurt them by her careless behavior. Naksh asks them to let Naira answer them about her move. Manish pacifies Dadi, who is much worried for Kartik. Naksh feels Naira was helpless to do this. Naira meets them, but doesn’t break her silence. Dadi asks Naira why isn’t she revealing the reason, that can clear her name. Manish regrets to regard Naira as his daughter. He feels she never deserved their love and respect. He doesn’t want Suwarna to bond with Naira. Singhanias also want to know the truth. Naira feels she can’t explain them the complicated thought.

She doesn’t want to slip into the painful memories of the past. Naira sheds tears and isolates herself. Kartik gets hating Naira and feels she isn’t the one whom he loved. He wonders how she got so heartless to decide to abort the baby. He wants to know what does Naira want to do. He is much broken within. Suwarna knows that Naira is also shattered. Naira changes her mind about Kairav’s custody. She surprises Kartik by asking him to get Kairav’s custody. She doesn’t want to fight Kartik further. Vedika’s past will bring interesting twists in their lives.