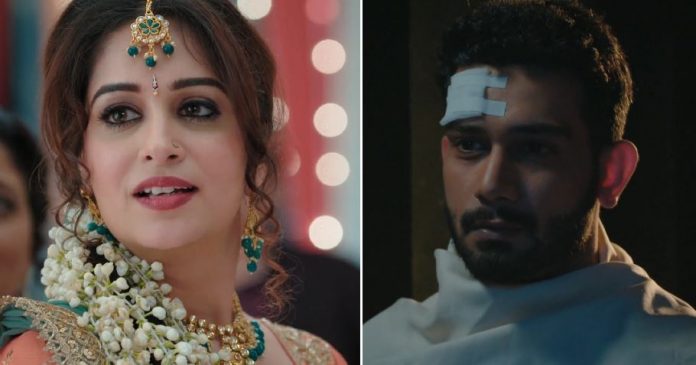 Kahaan Hum Shocking Sonakshi faces psycho lover Tanya and Pari get along well, much to Rohan’s surprise. Rohan praises his wife to make Pari jealous. The Sippys enjoy Rohit’s engagement function well. Suman is stressed as Sonakshi hasn’t turned up yet. Yash asks Rohit about Sonakshi. Yash’s mum taunts Rohit to get engaged to Raima, who is around him all the time. She makes them feel awkward. Naren gets angry on Rohit for choosing a careless and disrespecting girl. He tells that Sonakshi doesn’t value them and didn’t come in her own function. Rohit tells him that they also miss the family functions sometimes. Naren reminds him that they are professional doctors and get late while saving lives.

He tells that Sonakshi is late since she is acting and dancing at her shoot. He feels there is much difference in their professions. Rohit asks him to respect Sonakshi’s profession. Rohan asks them not to argue in front of the eyes. Naren declares that he will leave the function. Ajit stops Naren by announcing his name with Veena for the couple dance competition. Naren gets compelled by the family to stay back. Yash’s mum asks Rohit to dance with Raima since Sonakshi hasn’t arrived. Rohit and Raima have a dance. He isn’t comfortable. She asks him to imagine Sonakshi.

Rohit goes lost in Sonakshi’s memories. There is a cute dance scene between them in his dream sequence. Rohit praises his love, Sonakshi. Raima is much happy for him. He gets disqualified from the game. Raima also loses because of him. Suman is happy that Raima isn’t close to Rohit now. She hands over the engagement ring to Pari. Pari follows Rohan to his room. She tells him that she didn’t like him praising Tanya. Rohan and Pari spend time together. Mahesh makes a plan to steal the engagement ring to halt the function.

He finds Pari disgusting to romance a married man. He steals the ring. Akash and Deepa win the dance competition. The guests want to leave. They don’t expect Sonakshi to come. Naren asks Veena how long will they entertain the guests. Rohit manages to request the guests to stay back. Sonakshi surprises Rohit by donning Madhuri’s avatar and dancing on his favorite song. She compensates for her late arrival. She gets applauded for her dance. She doesn’t feel bad on hearing some taunts. She wants to just focus on Rohit.

Sonakshi comes across Mahesh in Rohit’s room. Mahesh hides himself from her by switching off the lights. Mahesh is her obsessed lover. Sonakshi gets a huge shock when she comes face to face with her psycho lover. Mahesh runs away again. Sonakshi gets afraid sensing its the same person who met her in the green room. Sonakshi gets alert that someone is stalking her. Rohit decides to protect Sonakshi from the disguised person. Rohit turns into Sonakshi’s bodyguard to protect her. Rohit’s careless behavior towards his job angers Naren. Naren doesn’t want Sonakshi to ruin Rohit’s career. Will Sonakshi learn about Mahesh’s obsession? Keep reading.