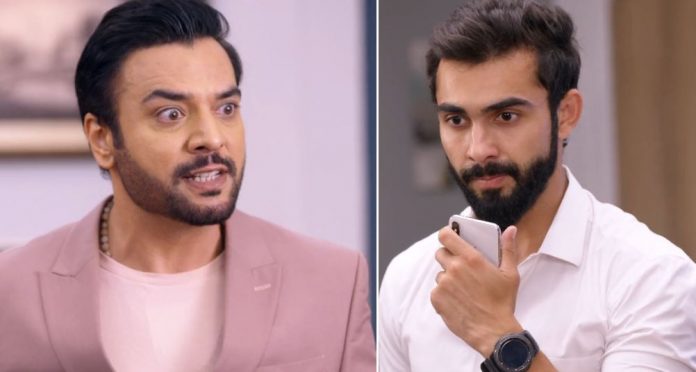 Mohabbatein Raman Yug clash attracts troubles Arijit brainwashes Yug against Raman. Aaliya stops Arijit from speaking wrong things. Arijit continues to provoke Yug. Aaliya wants Yug to talk to Raman and Ishita. Yug is tired of explaining himself. Karan asks him to meet Raman, but Yug refuses. He walks out of the office. Karan suspects that Arijit is bringing problems in the family. Raman shouts a lot to vent his anger on Yug’s careless attitude. He tells Ishita that Yug has become egoistic, he is going such weird things because he is a coward to run away.

Karan tries to handle the matter. Arijit fuels Raman’s anger as well. Ishita asks Arijit not to speak in their matter. Arijit tells him that they should sort the matter before the investors learn about their differences. Arijit tells them that investors want Yug out of the company, since he is bringing losses for them. Raman doesn’t want to remove Yug. Arijit tells him that the projects will stall if he doesn’t listen. He asks Raman to think of the dire consequences. He assures that he will try to talk to the investors once. He troubles Ishita by breaking Raman and Yug’s bond. Ishita is really worried. Arijit is sure that she will not rush after finding Neeti.

Ishita doesn’t know how to tell the excited family about Yug and Raman’s clash. Raman feels Yug doesn’t know carrying out any work well. He wants Yug to come home and talk to him. He gets angered that Yug is avoiding him. Bhallas want to celebrate Yug’s success. They want to congratulate Yug for winning a big project. Raman doesn’t reveal the truth to family. Karan cares for Bhallas. Ruhi tells Raman that Yug and Aaliya will be soon coming home. Raman asks Ruhi not to lie to him, she shouldn’t cover up anyone’s mistake. He gets more raged by Ruhi’s lie. He asks Ishita to just explain Yug that work isn’t done this way.

Ruhi also wants Ishita to sort the issues between Raman and Yug, so that the investors don’t learn their personal tensions. She tells that their enemy will take advantage of these personal clashes. Aaliya wants to talk to Ishita. Yug doesn’t want her to talk. Mani tries to bridge their conversation. He tells Ishita that Yug and Aaliya have come for dinner. Raman asks Yug not to behave like a coward and face the situation. Yug doesn’t want to face Raman, who doesn’t believe him. Ishita doesn’t know how to calm down Raman’s anger, since Raman isn’t wrong either.

On the other hand, Natasha asks Tara to stay at Arijit’s house. Sunil convinces Tara. Arijit doubts on Natasha’s plan. He asks Sunil to stay back with Tara in the guest room. He doesn’t want Natasha to compel him more. He tells that she can’t blackmail him. She asks him to accomplish the given task, then she will be gone from his life. She threatens him about exposing his truth. She asks him to just kidnap Raman and get him to her. Arijit wants to kill her. Raman blurts out the truth of Yug’s big mistake and cowardliness to the family. The family receives a shock knowing Yug’s destructive move. Yug gets compelled to resign from the company. Raman is helpless to accept his resignation. This breaks Yug and Aaliya’s heart and faith on Raman.