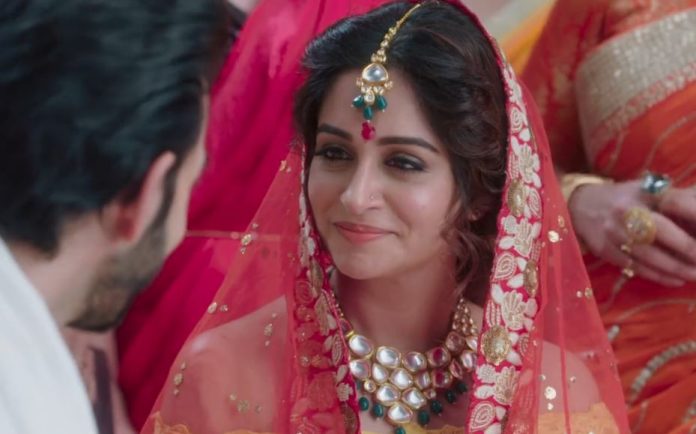 Kahan Hum Upcoming Spoiler Sonakshi disguised Rohit protects Sonakshi. Mahesh flees from the house. Rohit doesn’t want to spare him. He asks the security guards to catch Mahesh. Mahesh tricks Rohit and gets saved. The entire family reaches Sonakshi and find her shaken up in fear. They find Sonakshi hurt. They ask her the matter and try to console her. Rohit gets angered that Mahesh has run away. Rohit promises to secure Sonakshi. Naren gets angered that this incident happened in his house. He files the complaint and seeks help from police. Rohit tells them that he wants to talk to Sonakshi.

She tells him how she was mistaken about him, since the man had applied his perfume. She tells that she has known the stranger by sensing the wrong touch and then she struggled to get free. She tells him that the man was trying to harass her. When she cries a lot, he asks her not to get much scared. She reveals the earlier instances, when she faced an imposter on the sets and also the fake watchman in her building. She feels someone is stalking her. Rohit promises to be with her every moment so that they can make their beautiful memories. He wants her to forget everything. Sonakshi still feels scared. He handles the matter maturely in a calm manner.

Rohit arranges a new dress for her. He adorns her with love. He doesn’t feel her alone. He gets her for the function with much love. Naren unwillingly does the rituals for Rohit and Sonakshi. Veena and Suman are happy for their children. Veena helps Suman complete the rest of the rituals. Sonakshi realizes that she has lost the ring. She doesn’t know that someone has stolen it. Suman gets speechless when she feels the taunts. Sonakshi has a back up ring of her choice. She tells Rohit that she has bought the ring for him, its her choice as he wanted.

Raima worries when Sulochana fills her ears. Rohit and Sonakshi exchange the rings. They get engaged. He gifts Sonakshi a bracelet to mark their friendship and equality. He tells them that their relation will keep changing names, but still they will be friends. He promises to keep her happy. Mahesh gets mad for Sonakshi. He wants revenge on Rohit. Sonakshi and Rohit meet the police commissioner. She narrates the entire incident. She learns that Mahesh is her obsessed fan, who can do anything to reach her. He asks Sonakshi to keep the security when she goes outside the house.

Sonakshi is terrified knowing the stalker can cross his limits again. Rohit assures Sonakshi that he will be with her like a shadow now, until they find the stalker. Rohit doesn’t suspect Mahesh, whom he has met on the same day. Rohit gets a big shock when the police investigation leads to the culprit. Ravi gets framed by Mahesh. Rohit doesn’t believe Ravi and slaps him. Mahesh gets saved from the police. Sonakshi doesn’t get convinced that Ravi is a thief. Will she catch Mahesh red-handed? Keep reading.

Coming up ahead, Sonakshi takes a Sardar’s disguise to become his new driver. Rohit has fired Ravi and got him arrested. He struggles without a driver. Sonakshi helps Rohit. Rohit identifies Sonakshi and gets flirting with her. Their conversation gets funny. Rohit removes her turban and catches her. He tells her that he knew about her helpful gesture. She wants to be his driver, if he can become her bodyguard. They have a romantic love confession moment.