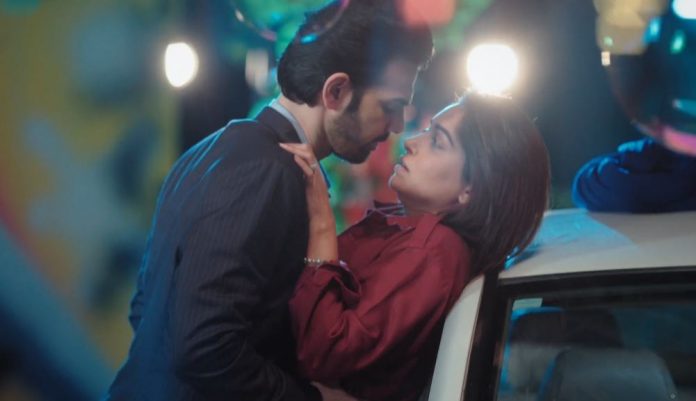 StarPlus Kahan Hum Stunning Ronakshi moment Rohit gets helpless to get Ravi arrested by the police. He tells Sonakshi that he can’t trust anyone when its about her safety. Mahesh gets overconfident that he has fooled Rohit and now he is free to stalk Sonakshi. Rohit asks Sonakshi to finish her work. He tells her that he is going home. He hides on the set to observe everyone. Sonakshi gets ready for the shoot. She isn’t aware that Mahesh is watching her. Rohit doubts on Mahesh when he finds him going after Sonakshi. Mahesh learns that Rohit is following him. He is more cunning than Rohit. He doesn’t want Rohit to doubt him. Rohit gets clear of his doubt. He still stays alert.

Mahesh doesn’t want Rohit to marry Sonakshi. Rohit meets Ravi at the commissioner’s office and apologizes for the slap. He reveals the commissioner’s plan to find the real culprit. Rohit tells Ravi that they ha3ve to find the culprit and keep this fake arrest news a secret. Ravi is ready to help Rohit and Sonakshi. Sunita is worried for Ravi. She begs Sonakshi to help Ravi. Sonakshi assures to find some way.

Rohit thinks to inform Sunita about the stalker’s presence around. Naren and Sippys learn about Ravi’s arrest. Naren loses trust on Ravi. His anger builds up when he gets obstructed by the media. He yells at them for coming in the way of his duty. The media defames Naren for insulting them. On the other hand, Raima gets confused that Sonakshi is right for Rohit or not. Raima shares her dilemma with Rohit. Sulochana tells Raima that Sonakshi is very clever and won’t let Raima and Rohit’s friendship continue. She tells that Sonakshi will throw out Raima from their lives. She gets depressing Raima further.

Raima knows Sonakshi is insecure. She doesn’t want to lose her friend Rohit. Rohit gets a cab booked. Rohit finds the same song playing which Sonakshi plays.
He gets to see Sonakshi’s bracelet and ring, worn by the driver. He realizes that Sonakshi has taken the get up to surprise him. Rohit pulls her leg by speaking rude things about her. He boasts of his looks, success and charm. He undervalues Sonakshi deliberately to tease her. Sonakshi doesn’t want him to drag the silly jokes.

She gets an idea to tease him and strikes his male ego by praising Sumit. She tells Rohit that Sumit is much handsome and masculine. Rohit gets upset when she compares him with Sumit. Sonakshi pranks him to the extent that he gets raged up. Rohit and Sonakshi end the drama and confront each other for the silly jokes. Suman arranges sponsors for Sonakshi’s marriage, so that the expenses doesn’t become any tension. Suman is happy that every little thing will be sponsored. Rohit tells Sonakshi that he would kiss her and prove himself. He teases her. Rohit tells her that he wants to save their romance for marriage. Ronakshi have their sweet moments.